by Charles Conn
in In Focus: Panama, Panama
0

Be sure to enjoy that last blast of yuletide cheer before it all goes the way of Christmas past… for just as soon as Santa’s yearly visit ends do holiday revelers turn their focus to New Year’s.

By this time, you may have noticed the countryside (and some parts of the city) has become populated by creepy effigies. Known as muñecos de año viejo (old year dolls) or muñecos judas (Judas dolls), these artfully crafted, life-sized dolls are made with old clothing and shoes, a wig perhaps, and stuffed with dried leaves and sometimes firecrackers.

These scarecrow-looking men and women symbolize the year gone by… that is, whatever the creator disliked about the past year, and what he or she thinks should be left behind in the old year.

Typically done up to represent prominent political and cultural figures, some common themes for 2016 dolls include Trump—a hot topic this year—Fidel Castro, and “El Tortugón,” aka, current Panamanian President Varela, who is made to look like a turtle for how slow his government acts. Likewise, Obama has been featured over the years of his presidency, and Venezuela’s President Maduro is a notorious long-time favorite.

Muñecos aren’t always political, though, and sometimes they celebrate a popular figure, as opposed to representing an object of scorn. Chespirito, or “Little Shakespeare,” a popular Mexican actor and comedian who died in 2014, has been a popular character. And this year Steve Harvey is enjoying infamy for his Miss Universe faux pas. 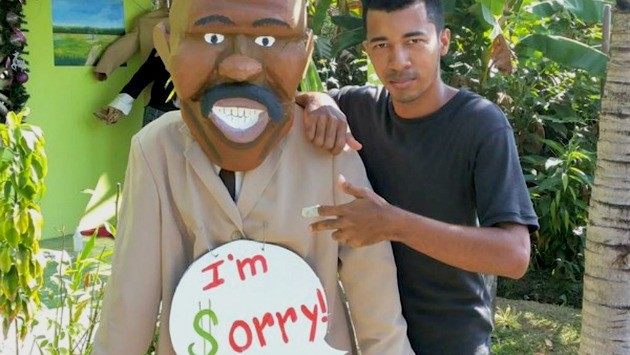 But perennial favorites include less topical characters, too. Homer Simpson enjoys popularity year in, year out, as do Transformers and Minions.

Judas dolls represent all the good and bad of the year gone by, all of which is released in a cathartic ritual when they’re burned at midnight while folks ring in the New Year.

The dolls are best appreciated along the Pan-American Highway, especially near San Carlos, where a cottage industry has built up around their confection, with people charging upwards of US$100 per effigy. In Chame, they can run up to US$500.

Local politicians are by far the most requested muñecos from the little factory. Last year, ex-president Ricardo Martinelli was a prominently featured figure, as well as other Panamanian officials embroiled in heady, front-page scandals.

Those Quaint And Crazy Customs

Panamanians tend to harbor a fair amount of superstitious beliefs, and at no other time is this more evident than in the days leading up to the stroke of midnight marking the arrival of the New Year.

Incense is burned, special baths are prepared, and dwellings are cleaned and blessed, all to ensure the year ahead will be filled with abundance and positivity.

There are many such good luck rituals in which you can take part, including:

The holidays don’t properly end until the Day of the Magi on Jan. 6, a traditional celebration that’s an institution in places like Mexico, Spain, Peru, and Puerto Rico, where children expectantly await for gifts brought to them by the three wise men. Because of this, shoes (or shoeboxes) are left out the night before to be filled, like Christmas stockings on the 25th, with little baubles and often money.

Rosca de reyes (king cake) is eaten at this time, similar in style to the ones made famous in New Orleans, minus the plastic baby Jesus. While Panama City dwellers don’t mark the occasion with much fanfare, the tradition survives in the town of Macaracas, Los Santos province, where Día de los Reyes Mago has been observed for nearly 200 years.

The town folk customarily put on a play that reenacts the fabled visit of Balthasar, Melchior, and Gaspar to the infant Jesus in the manger, in addition to an ox-drawn cart parade and various folkloric presentations. 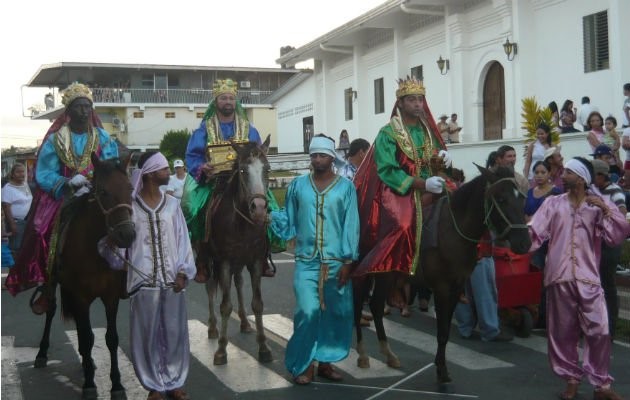 The town of Macaracas in Los Santos has marked the Day of the Magi for nearly 200 years
Copyright: @ZenaidaVasquez7/Día a Día

Of the authentic village activities you may witness on Jan. 6 in Macaracas is the building of a casa de quincha, an event in which the community comes together to construct a house for a family in need.

Made of quincha (an adobe-like mud) and bamboo, this typical-style construction requires the mixing of dirt and water on a grand scale. To accomplish this, shoes (or cutarra sandals) are removed, pant legs are rolled up to mid-calf, and arm-in-arm all in a row, groups of people take turns stomping back and forth over a suitable patch of ground until the claylike mixture of mud has turned out just right.

Jan. 6 is also the day Panamanians burn their Christmas trees, though in recent years prohibitions have been issued against this activity taking place in the city metro area due to fire safety concerns.

By the 6th, global warming notwithstanding, the end of the rainy season has gradually set in, and the torrential rains are replaced by lower humidity levels and the trade winds that mark the dry season months. 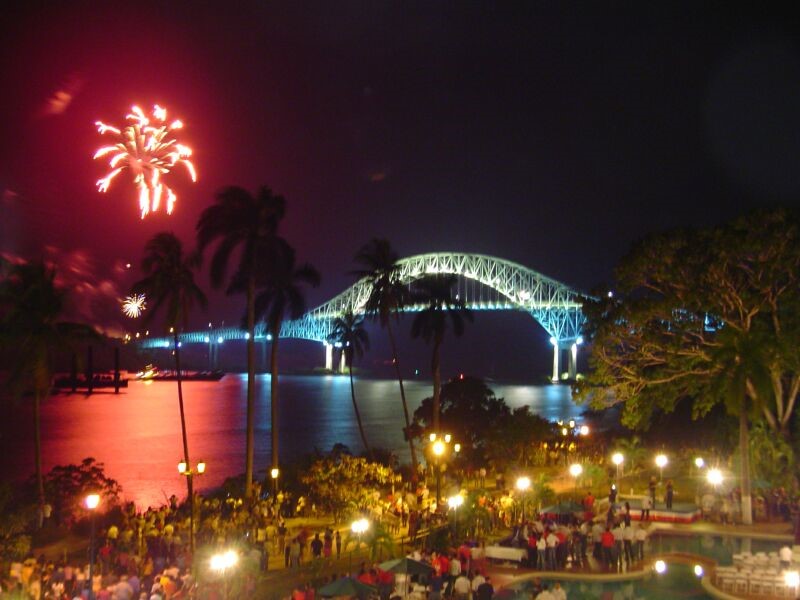 The Bridge of the Americas alights as the country celebrates
Copyright: Panama Canal Country

If you’ve survived the holidays intact, you now have “summer” to look forward to, and that Bacchanal that finds an entire country at play in February—carnaval…

Celebrating Holidays In Thailand, From Santa To Songkran

Is There A Right Time To Retire And Move Abroad?

Charles Conn is a Canal Zone-born world traveler with a film degree from the University of Southern California and a passion for all things Panama. When he’s not scouting isthmian locations far and near, Charles can be found at his farm on the outskirts of Panama City where he likes to read, do yoga, and listen to dance music.

The Panama Golden Visa: Residency And A Second Home For The Price Of One

Is There A Right Time To Retire And Move Abroad?