“You have to see this place,” remarked our weekend traveling companion, almost in awe.

“I admit it. I was skeptical,” continued our new friend, an American four years resident in Costa Rica.

“You told me the infrastructure is better in Panama than in Costa Rica, but, really, I didn’t believe you. Panama’s still Central America, after all.

“You told me the countryside and the coast are both dramatically beautiful. But, again, I didn’t pay much attention. Everyone in Costa Rica talks about how flat Panama is…how much more impressive Costa Rica’s Pacific coast is than its counterpart in Panama.

“You told me the economy in Panama continues to surge ahead, despite everything going on elsewhere in the world. You told me about the construction and the road works, about the tourism figures and the Canal revenues. Frankly, I dismissed it all as so much rhetoric. I mean, times are tough all over, right? At least that’s what I believed.

“Really, I made the trip out of curiosity.”

“And now that you’ve spent a couple of days here?” I asked.

“I’m sold. Everything you’ve been saying is true.”

Our friend who traveled with us from Panama City to the Pacific coast of Veraguas Province and back last weekend is thinking about moving on from Costa Rica. He came to see what Panama has to offer.

The business he launched in Costa Rica a year-and-a-half ago has stalled…as has the Costa Rican business world, real estate industry, and economy in general.

“There’s still opportunity in Costa Rica, I guess,” he told us, “but nothing like what I see here in some parts of this country.

“I see what you mean,” he continued, “about Panama’s middle class. It’s evident everywhere. All those housing developments we passed on the outskirts not only of Panama City, but of Santiago, as well, in Veraguas, for example. They all seem to be new housing for local middle-class families. And an expanding middle class, like the one here in Panama, is an important indictor of a country’s overall economic position.

“And the roads we traveled! Nowhere in all Costa Rica are there roads to compare with the ones we drove way out in what really is the middle of nowhere.

“I had the sense, before coming here, that Panama was expensive…maybe more expensive than Costa Rica. But that’s not the case. For some things, Panama is cheaper, especially out in Santiago and Veraguas. That restaurant you pointed out to me, where you could have a lunch plate of meat, salad, rice, and beans for US$2.50? That same tipico lunch in Costa Rica would cost about twice as much.

“There’s something else, too…something less quantifiable. In Costa Rica, there’s an attitude among the Ticos…I don’t know…almost as though they don’t want you there.

“Here in Panama, I don’t get any sense of that. I feel very welcome here.”

“If you’re staying at an inexpensive hotel or condo in Panama City but want to enjoy the luxury amenities of the Miramar Intercontinental Hotel (US$329 per night), sign up for a week Spa Pass for US$63 per person.

“You get full-day access to the beautifully equipped fitness facility with sauna, steam bath, etc., and the nicest swimming pool in town, complete with lounge furniture, towels, and beverage and food service (although a little pricey).

“That works out to US$9 per day per person.

“The many daily rental condos in the area cost around US$100 a night…which is more than US$200 a night cheaper than staying at the Miramar. Meaning the US$18 a day for two is a screaming bargain.

“Oh, and you also get free parking. Here’s a recent photo of the pool to give you an idea of the facilities. The tall building in the background is our condo, due to be completed in August.” 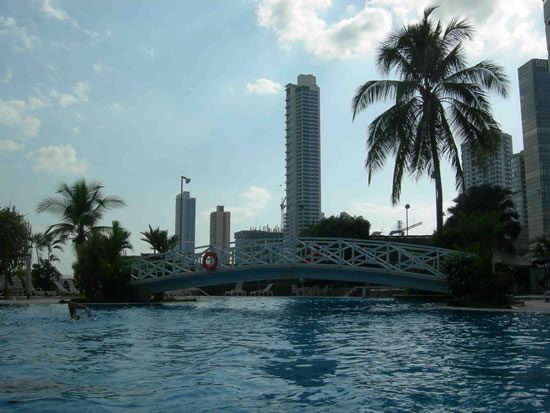 “Kathleen, we are considering either Panama or Belize as a retirement location. Next month we are checking out Belize first to see how we like it.

“One thing I am concerned about, though, in the current economic uncertainty, is that both the Panamanian and the Belizean currencies are pegged to the U.S. dollar. If and when the dollar goes down, how will that affect the currencies in those two countries? Will their values go down, too?

“If that were to happen, how would you suggest to hedge that?

Technically, both countries’ currencies are pegged to the U.S. dollar; however, Panama really has no currency of its own.

Either country could decide to devalue its currency against the U.S. dollar, which would make things cheaper (in dollar terms). Or they could allow their currencies to float, which, with a falling dollar, could make the Belize and Panama currencies more valuable.

However, neither country is really big enough to make those moves, so a declining dollar likely would mean a declining currency in Panama and Belize…which in turn would mean imports from non-dollar countries would become more expensive.

On the other hand, if your income (investment, earned, pension, etc.) is in U.S. dollars, moving to either Panama or Belize means you don’t have to worry about exchange losses when bringing money into these countries for living expenses.

To hedge against the dollar, you could buy euro, for example, but, unless you have a big investment portfolio and want to focus on this kind of investing, you probably aren’t going to get much value out of trying to hedge the long-term movements of the dollar. Actively trading currencies comes with risks that are probably more than the small or novice investor wants to take on.

One good way to hedge one currency, short of buying another, is to hold assets in another. That is, you could invest in a euro-asset–a piece of real estate in euro-land, for example. Invest in a euro-rental property, and you’d not only be diversified into a euro-holding, but you’d be generating euro-income, as well.

If you aren't taking at least some of your profits out of the U.S. stock market and putting it into...

The Laidback Life In Puerto Armuelles Of A Family Of 6