The 8 Best House Rentals In Panama For Vacation

8 Amazing Houses You Can Rent For Your Next Panama Vacation

by Peg Fairbairn
in In Focus: Panama, Panama
0

Apart from my day job here at Access Panama, most of my time these days is consumed with the house we are building at Los Islotes on the western side of the Azuero Peninsula. As with most things in Panama, it’s taking longer than we anticipated. But it’s getting there.

I had hoped by now to be close to dangling my feet in the pool on my patio, margarita in hand, watching the sun set over the Pacific. Alas, that dream is still a few months away. For now, I have to be content sitting on the patio of our little rental in Mariato and watching the neighbors’ kids play football in our yard.

To console myself, every now and then I treat myself to a little fantasy—ogling the amazing properties that are available to buy and rent across Panama. And there is no shortage of them. Don’t take my word for it… see for yourself. Below are some of the places that, if I had a few grand to spare, I would consider more than adequate for a of couple nights R&R.

The Casa del Mar “Eco Aqua Villa”: This 3-bedroom, 2-bath home, on three oceanfront acres, about 20 minutes by boat from the Bocas del Toro airport, looks like the perfect escape for someone who can’t be bothered to walk further than the front porch for their morning swim. With a deck looking out over a mile-long coral reef, guests can don their masks and snorkels and hop right in. And the snorkeling gear, along with paddleboards and kayaks and canoes, comes with the rental. Guests also have access to a 22-foot fishing boat with captain and can arrange to have cooks, cleaners, and masseuses on-site. The Casa del Mar rents for US$550 a night or US$3,300 a week.

Over the Water House, Isla Colón: Another house built out over the water, this one is a little less pricey than the Eco Aqua Villa but looks equally enticing. Located on Punta Caracol, one of the Bocas del Toro archipelago’s larger islands, it is mere steps from a nature reserve and, of course, even closer to the ocean. It sleeps four, with two master suites on opposite sides of a common area, an open-plan gourmet kitchen, a splash pool on the deck, and a coral reef on the doorstep. The Over the Water House rents for US$250 a night.

Pedasí Beachfront Deluxe Villa: Located just outside Pedasí on the southeastern tip of the Azuero Peninsula, this home is described as belonging to an art collector and looks the part. It features three bedrooms (one of them in a detached guest house, in case you want to bring the in-laws), Wi-Fi, air conditioning, and a private beach area right on the doorstep. There’s an outdoor pool on-site in addition to a hot tub, a sunning deck, a barbeque pit, and hammocks galore where you can while away the tropical afternoons. The floor plan is very open, and one of the master baths features a Jacuzzi-style bathtub with an ocean view that is to-die-for. The Pedasí Beachfront Villa rents for US$600 a night. 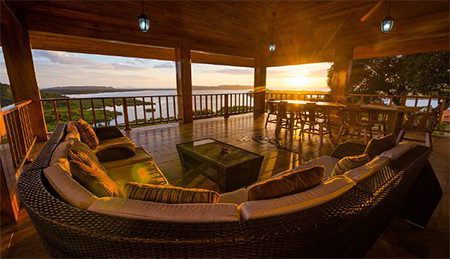 Villa Desperado (Villa Desperado): The Villa Desperado isn’t beachfront like most of the other properties here but features amazing views of the Gulf of Chiriquí and surrounding mountains. One reviewer said looking out from the patio every evening was like watching a National Geographic magazine cover come to life. It features three large bedrooms with king beds, a teak-paneled lanai (what we in the tropics tend to call a veranda), and acres of decks with views in every direction. The villa sleeps six comfortably and gets particularly rave reviews from folks who come for the area’s world-class fishing. Villa Desperado rents for US$243 a night.

Panama del Mar at Buenaventura: I’ve had lunch at Buenaventura, a spectacular gated beachfront community at the western edge of Panama’s City Beaches, but never the opportunity to spend a night in one of its opulent mansions. This 5,000-square-foot home that sleeps 10 would be a dream, if I could afford the US$500-a-night price tag. It features four bedrooms, each with an attached bath, maid’s quarters, separate TV room for the kids, and a large open living area on the main floor. It’s not directly on the beach, but the water is a short walk away, and the nearby JW Marriott resort—which guests at the house have access to—is one of the finest in Panama.

La Semilla Ecolodge: La Semilla is a country house only about 40 minutes from Panama City and would appeal to those for whom beaches mean only bugs and sunburn. The six-bedroom mansion sleeps 15 and can be rented in its entirety for large groups. There is a hot tub, steam room, common television room, a botanical garden, and soon, a butterfly house on-site. If you want the whole lodge to yourself, be prepared to shell out US$750 a night.

Sunset Villa on Isla Saboga: Isla Saboga is one of the Pacific islands accessible by ferry from Panama City and is known for its amazing sunsets. This two-bedroom villa with a deck overlooking the beach below looks like a perfect place to experience them for yourself. The master bedroom is on the top level and the second bedroom on the main level, so guests all have plenty of privacy. The beach below is named El Encanto and is a picture-perfect tropical beach with coconut trees leaning out over the tide line and turquoise waters. El Encanto rents for US$395 a night.

Playa Venao Villa: Back on the mainland, this kid-friendly villa is only a few minutes from the world-class surf spot of Playa Venao on the Pedasí side of the Azuero peninsula. There’s no air conditioning, but the owners swear that the villa’s open air concept and passive cooling system corral the ocean breezes and keep things cool both day and night. (There are no reviews to attest to the veracity of that statement, however.) It features four bedrooms, Wi-Fi, a fully equipped kitchen, hammocks throughout, and a deck with spectacular views of the surrounding rainforest and ocean further afield. The Playa Venao Villa rents for US$500 a night.

If none of these properties are your style, there are plenty of other options in Panama. If you doubt me, come and see for yourself. Join us for our Live and Invest in Panama Conference this June 8–10, to get a taste of the real estate opportunities in one of the most desirable locations in Latin America, if not the world, to park yourself for retirement or to set yourself up for a tax-free lifestyle. Sign up here now.