by Shaunette Bailey
in In Focus: Panama
0

I was never much of an animal lover, even though I did have pets growing up.  A stray cat here and there, a couple of dogs that always stayed outside…

Growing up in Jamaica, dogs and cats were simply never brought inside the house, much less cuddled or petted. They were always held at an arm’s length and no emotional connection was made to them.

As kids, my sister and I would always look in disgust at pet owners who allowed their dogs to lick their faces or even sleep in their beds. “Who would do such a thing?” we would always ask ourselves after several “ewws” and a series of face contortions.

A Change Of Heart

Some 20 years later, however, I’ve had a change of heart. I now have two pets: Phoenix—who we found as half-drowned kitten and rescued from a drain—now healthy and mischievous, and also Ash—a once an unwanted mongrel—who’s been living the good life for the past seven years.

These two have made their way into the family, and our lives truly would not be the same without them. This realization makes me appreciate the challenging work being done by a tireless few in rescuing Panama’s street animals and placing them in caring environments through adoption. 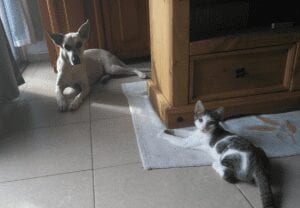 In Panama, a handful of agencies advocate for the well-being of stray animals in the capital city. They rescue these precious creatures, nurture them back to health, and then put them up for adoption. Examples of such organizations are Fundasis and Adopta Panamá to name a few.

Other places such as Spay Panama in Bethania spays and neuters not only strays, but domestic pets as well, which helps to reduce the number of unwanted animals in the city. It pleases me to know that kind-hearted people still exist, and that they care enough to open their doors to animals in need.

Despite these efforts, there is a dark side as to why there are so many stray animals in Panama in the first place. A strong demand for luxury, purebred cats and dogs has created a lucrative market for buying and selling animas, which is getting out of control.

It’s hard to deny the appeal of a twinkle-eyed, purebred puppy. On top of that, a status is associated with owning a rottweiler or a poodle, much like touting luxury-brand clothing. This is especially true in the case of huskies in Panama. I always feel bad seeing a husky paraded around in the 30 degree Celsius (86º F) heat.

Nevertheless, a large percentage of these animals either die after being sold because of improper breeding practices or are ill-treated because of ignorance about animal care. Animals need as much care and love as any child.

Don’t get me wrong, these are gorgeous pets and I admire them whenever I see them in the park. But perhaps if people were aware of the downsides of pet breeding, such as puppy mills, overbreeding, and the inhumane conditions in which animals are forced to produce litter after litter, they’d be more inclined to consider an alternative.

Additionally, taking care of these luxury breeds is not cheap, often involves trips to professional groomers and the vet—they are more likely to suffer from health problems than mixed breeds.

Not only should breeders have to meet specified standards in carrying out their practices, but potential pet owners should be screened as well, to make sure that animals have secure homes. By doing this, the risks of abandonment and neglect would be lowered.

If you happen to drive to Gamboa, which is a wild jungle area about an hour outside of Panama City, you may catch a glimpse of an occasional starved dog, cat, rabbit, or even an exotic snake along the side of the road. These pets have most likely been abandoned by owners who, unable or unwilling to care for them, drove out to this notorious pet-dumping area to leave them to fend for themselves.

These unfortunate critters suddenly find themselves in a hostile environment where they will no doubt starve to death or become prey to other wildlife. There should be harsh consequences for individuals who bring such cruelty upon their unsuspecting pets. Panama should follow the example of Switzerland, Hong Kong, or Germany that have strictly-enforced animal welfare laws and fine or even imprison for abuses such as abandonment.

Thankfully, a few kind residents of Gamboa retrieve these abandoned animals and find or make homes for them. One such individual is Michelle who adopted a rabbit that was found by the roadside.

Michelle fed and cared for the rabbit, named Ginger Snout, who under proper care, grew in size and became one of Gamboa’s main attractions. Talk about one man’s trash being another man’s treasure…

If you are thinking about getting a pet, first consider if you have the time and resources to commit to it. This includes not only space for it to roam, finances for proper care and regular veterinary checkups, but also energy to devote to it every single day, as you would a child. Then, visit one of the animal shelters in the city such as Fundasis, and witness what is involved in taking care of an animal. Consider volunteering, especially if it’s your first pet, to have a more comprehensive experience.

Next, decide how important the appearance of your pet truly is to you. Panama City’s shelters are full of furry friends just waiting for their chance to be loved. By adopting one, you will avoid not only the hefty price tag associated with pedigrees but also the moral price tag often involved in pet breeding.

Having a pet is an immense responsibility, and each deserves a loving home. They are a commitment, not a convenience.

I've lived in Panama for about 15 years... And I've invested more money here than anywhere else... From farmland and...

The Top Places To Visit In Panama To Escape The City