Panama is surrounded by countless stunning islands that add to her allure. But none are as steeped in history or have the curious mystique of Contadora Island, located fifty miles off the coast.

It’s the 11th largest island contained in the Pearl Islands Archipelago in the Gulf of Panama, and the only one that can be reached by airplane. Thus, there is regular daily service by both plane and ferry.

Boasting 13 stunning white-sand beaches, turquoise to teal waters, and verdant rain forests, it assaults the senses and pleases the eye. The nearly perfect climate mirrors that of the rest of Panama with its two seasons, dry and rainy, and high humidity, with the average temperature of 80°F to 90°F.

Circumnavigating the island (usually done by golf cart or scooter) takes about 25 minutes, providing a cornucopia of sights. From luxurious and expensive beach homes nestled in immaculately landscaped grounds to crumbling and decaying building relics slowly being choked out by jungle vines, the island is a mysterious anomaly.

The original inhabitants were indigenous people who were cruelly desecrated by the Spanish conquistadores in 1513. These self-serving trespassers arrived to Contadora in order to harvest the local pearls. For this endeavor, they imported slave labor from Africa throughout the 16th century. The descendants of these unfortunates continue to reside in the area.

For many years the island remained a quiet, secluded home for the two hundred or so local Panamanians… as well as a select few millionaires seeking a serene, sparsely populated retreat.

In the 1960s, a sprawling, elegant resort was constructed and became a prestigious haven for the rich. Consisting of over three hundred rooms and an elegant dining room where sumptuous meals and elaborate drinks were served; it is said the champagne flowed like a fountain. Numerous outbuildings were built to accommodate the richest of the rich and their diverse pleasures, including a casino.

It became world-famous in 1979 when the Shah of Iran chose it as his haven of exile. During this time, he purchased multiple elaborate homes in the area but, due to tax evasion issues, these are now rented out to tourists.

Suddenly, the island and the resort became exclusive, expensive, and patronized by the rich and famous. Hollywood stars such as Sophia Loren, Christian Dior, Elizabeth Taylor, John Wayne, and the Kennedys bought private getaways or resided in the now famous resort.

As the story goes (and this has not been formally confirmed), this prestigious resort was owned by Colombian drug lords as a money-laundering oasis. However, in 2009 one of the owners perished in a plane crash, leaving the place in serious debt. Sadly, no one claimed this once proud establishment and it changed from a splendid playground to a crumbling mess. It is now abandoned and sinking into ruin. Only the rotting leaves are left to cavort through this once elegant domain.

Also abandoned, beached on the nearby shore, and in complete decay, rests the once proud ferry boat that the Colombian owners used to shuttle their guests to and from the mainland and the resort.

In close proximity to that sad, skeletal old madam, sits a cluster of unfinished luxury villas abandoned before completion. In a lesser state of disrepair thanks to being constructed more recently than the hotel, these are very likely salvageable for someone enterprising and daring enough to tackle the project. 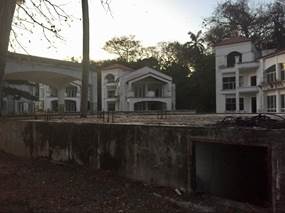 As time went on, the island once again shone in the spotlight after the reality show Survivor was filmed there. Suddenly, it was no longer reserved for the wealthy and prominent. Tourism has awakened and the eyes of speculating investors are turning toward this lovely destination.

Real estate runs the gamut and is no longer concentrated on high-end luxury abodes. A corner lot for commercial development or a home is selling for US$120,000. On offer for US$650,000 is a six-bedroom, six-bath beachfront vacation rental duplex. Or on the higher end, a gorgeous oceanfront mansion complete with its own private pier can be purchased for $2,950,000.

Yes, the Hotel Contadora’s glory days have disappeared as if only a mirage. To quote a 2002 newspaper article, “The champagne ran out years ago.” But this beautiful island has not fallen to its knees in abject defeat. On the contrary, it is an awakening princess crying out to be noticed and appreciated.

Why A Farm In Portugal Should Be Your Next Investment

The rainy season is upon us. Here in Panama this time of year, it doesn’t rain all day or even...

A Look At The Different Cultures That Call Panama Home

Is It Safe? The Surprising Truth About Crime In Panama

Will You Prefer Living In Costa Rica Or Panama? Find Out Here

A Guide To Running A Marathon In Puerto Armuelles, Panama

Why A Farm In Portugal Should Be Your Next Investment