A Guide To Some Of The Best Fishing In The Caribbean: Belize

Catch Of The Day—Fishing Under The Caribbean Sun

Do you seek the heart-pounding thrill of your reel when it sings its song of pescatarian triumph as your boat cuts through Caribbean waves… or the camaraderie of beers and jokes with friends any afternoon while bobbing on lapping, warm turquoise waters… or, maybe, what calls you is the dream of a solitary fisherman’s silence on a deserted white-sand beach facing the amber light of the dimming sun…?

Those who seek the trophies of a mighty hunter of the sea, who strive doing what our ancestors have done since the dawn of humanity to recapture their primal being, dream of this secret place of fishing nirvana.

Because the Mesoamerican Barrier Reef forms the most important fish nurseries in the Caribbean, some of the best game fishing anywhere is available right here in Belize. 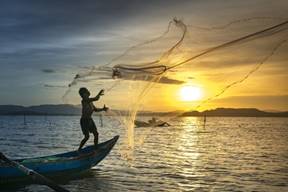 The peoples of Belize have depended on the waterways and marine environment for their survival for millennia. Today people come from all corners of the Earth to experience all kinds of fishing in Belize—from spin and fly fishing and trolling to casting nets from small dories (traditional, small dugout canoes).

Belizeans are deeply aware of their dependence on fishing and reflect it in their laws: “Queen’s law” means that the first 66 feet from all bodies of water is “crown land”—common ground open to all, and Belize is the first country ever to ban horrifically destructive bottom trawling in her waters.

While the Barrier Reef is one of the most biodiverse systems in the world and home to over 500 species of fish, the estuaries and inlets are mainly known for their tarpon, snook, and jacks. For big game such as sailfish, marlin, bonito, and pompano, you’ll have to venture into the deeper waters farther from the drop-off beyond the reef.

Guides have their own favorite secret spots, and local knowledge is essential for the best fishing. There’s also cost to keep in mind. You can always arrange for a charter to take you on a fishing expedition, and prices vary from the economical to the luxurious depending on what you want to do and where you book it from. Booking from Ambergris or Placencia through a tour operator can cost more than spending a little time finding a local fisherman to take you out.

Belize’s land mass is covered in lagoons, which are abundant with catch. Crooked Tree village and the villages in the Corozal district gather a lot of the protein in their diet from the teeming lagoons.

Here’s how much it will cost you.

Only Belizeans and residents can obtain a yearlong sportfishing license.

The sportfishing license is invalid within any of the marine reserves. A different license is needed, which can be purchased from the Fisheries Department.

In marine protected areas several restrictions on fishing apply: No nets, no long lines, no traps. You’re only allowed a maximum of 20 pounds of combined seafood, and the license is only valid for 7 days.

Export Permits (How to Get Your Catch Home)

The permit only allows you a maximum of 20 pounds of sea food combined and it is only valid for seven (7) days. You can catch as many fish as you want in Belize, but to legally carry the fish out of the country on a plane you need an export permit.

Game fish like snook, snapper, jack, cubera, and tarpon use these waters both to feed and spawn. If you catch a tarpon, snook, and a cubera all in one day, you’ll achieve what fishing aficionados call the “jungle slam.”

This bony fish lives in both salt and fresh water and grows up to 8 feet. Tarpon are most plentiful from October through mid-December and in June and July. It’s only for catch and release. It’s a great, fighting fish that lives in rivers, coasts, mangroves, estuaries, and, despite its size, can even live in oxygen-poor waters.

This bony fish lives in both salt and fresh water and grows up to 8 feet. Tarpon are most plentiful from October through mid-December and in June and July. It’s only for catch and release. It’s a great, fighting fish that lives in rivers, coasts, mangroves, estuaries, and, despite its size, can even live in oxygen-poor waters.

This cichlid can grow to more than 12 inches in length. In Belize it’s both a food and a game fish.

Actually a giant, freshwater prawn, these are either caught in small lobster traps or snorkeled for. These beauties can grow for years… until you snag them, that is.

This prolific fish was first introduced in Belize for aquaculture, and has become an invasive species, deeply impacting the native species in the wild. It’s capable of living in both fresh and brackish water. It grows up to two feet long on a steady diet of phytoplankton and algae.

The Central American river turtle is prized locally for its rich meat. Dressed in full armour, the hicatee may attain a weight of nearly 50 pounds. There are rules for catch, though.

The closed season is for the whole month of May; females must be 15 to 17 inches minimum, and only 3 hicatee are allowed per person—no more than 5 per car—per hunt.

Fin fish are the main source of protein for a great number of Belizeans and international visitors. Just beyond the Mesoamerican Barrier Reef is some world-class deep-sea fishing. Sailfish, marlin, blackfin tuna, wahoo, bonito, mahi-mahi, king mackerel, and much more await you there.

Also called banana fish, they inhabit shallow coastal waters, and is prized by fishers for its speed and fight… and weigh—up to 15 pounds. Sportfishermen come from all over the world to Turniffe Atoll to pit themselves against it. Bonefish eat worms and other bottom-dwelling treats. Bonefishing is best from September through January.

These fish are also catch and release only, but give a wonderful fishing experience. Permits make up one of the “big three” prize fishes you need to catch in a single day for a fly fishing “grand slam” (the others are tarpon and bonefish). They’re the most difficult fish to bag in Belize. Individuals have flattened bodies and are timid and flighty, but in schools they are aggressive and bite. Permit fishing peaks from August through October and March through June.

These fish are also catch and release only, but give a wonderful fishing experience. Permits make up one of the “big three” prize fishes you need to catch in a single day for a fly fishing “grand slam” (the others are tarpon and bonefish). They’re the most difficult fish to bag in Belize. Individuals have flattened bodies and are timid and flighty, but in schools they are aggressive and bite. Permit fishing peaks from August through October and March through June.

The much bigger cousin of the tasty red snapper, these get bigger and are more fun to catch. These fish are pretty great to eat, even if sometimes they look like something out of a horror film set in an aquarium thanks to their 40- to 120-pound frames.

This is a restricted fish. The Fisheries Department announced that fishers with special licenses can only fish in two areas: Northern Two Caye at Lighthouse Reef and Mauger Caye at Turneffe Islands. The legal size for sportfishing is 20 to 30 inches only, and the closed season lasts from Dec. 1 to the end of March.

Reaching up to 30 or 40 pounds in weight, these delicious, oily fish are excellent for cold or hot smoking.

This is the smallest tuna species and maxes out at around 45 pounds, but is prized for sushi and sashimi.

This is Belize’s most important fishing commodity. It’s strictly regulated, with a closed season from Feb. 15 to June 14. These can be fished for with pots or by free diving, but bear in mind the size limits: 3-inch carapace length or 4-ounce tail.

This voracious invasive predator is devastating to the local fisheries’ population, and is endangering the coral reef. A bounty is payable to those who catch them, which is great, considering it’s open season on lionfish 24 hours a day, 365 days a year. Chefs are specifically engineering delicious new dishes to encourage more people to eat this beautiful fish with painful poison barbs on its body.

The giant sea snails’ shell is an iconic emblem of the sea. It’s delicious in soups or ceviche, and even the French are impressed with this size of escargot. Bear in mind that the government only allows so many to be caught; its fishing season closes once the national conch quota is filled.

Conch is harvested by free diving along coral reefs and seagrass meadows at depths ranging from 5 to 60 feet. It’s forbidden to scuba dive for commercial conch. Closed season is from July 1 to Sept. 30.

You can shark fish in Belize. This is a special licensed fishery that is under strict regulation and surveillance, so much so that only 59 licenses were issued in 2016.

Sea cucumber fishing also occurs (but they aren’t as exciting to catch as marlin). Prices have risen from BZ$3.50 per pound to BZ$6 per pound (wholesale) for sea cucumber in recent years.

Why Our Next Overseas Adventure Is Taking Us To The Orient

What You Need To Know Before You Move To Shenzhen, China

What You Need To Know Before You Move To Shenzhen, China