A Trip To The Belize Zoo: Indigenous Animals In Their Habitats

A short half-hour, 29-mile drive west of Belize City on the way to Belmopan is the most amazing little gem of Belizean living history that many people neglect to stop and check out.

It’s right on the highway on a long, poorly signposted and somewhat uninteresting stretch of road. You could easily drive past without knowing what you’re missing: an amazing natural resource for Belizeans, tourists, and expats alike.

When people imagine tropical jungles, they often think of places akin to Kipling’s “The Jungle Book,” where one can frolic and interact with all the exotic fauna around them. The reality is quite different.

Jungles and rain forests are challenging to traverse, and most animals often aren’t that keen to introduce themselves to you. I know wildlife rangers in the Jaguar Reserve who only have seen an actual jaguar a handful of times in their entire careers. Jungle animals are elusive by nature, and some of Belize’s faunae are legendary in their ability to avoid humans.

Canoeing or boating on the rivers often gives fabulous up close glimpses of these living legends, however fleeting, but doesn’t afford the chance for prolonged appraisal.

With all these shy creatures in the jungle, what are we to do?

In that case… we go to the zoo, silly!

Zoos worldwide have at times received bad press over the years for seeming to the general public and animal rights groups like cruel prisons that lack adequate living spaces and empathy, designed for our entertainment at the major detriment for all the animal inmates. In contrast, the Belize Zoo is something different.

Founded in 1983 by Sharon Matola from Baltimore, Maryland, as a shelter for native animals that had been trapped locally for a “wildlife” documentary and, as a result, were unable or unsuited to be rereleased into the wild, the Belize Zoo took a progressive approach to animal rehabilitation and environmental education for that time.

Many children from the nearby towns and cities, even before growing up and leaving home for work, were already losing the bushcraft and appreciation for nature their forefathers had grown up with in the villages, as well as basic knowledge of the indigenous animals, and lost sight of the importance of the environment.

This zoo’s philosophy is to teach Belizeans about the hidden richness of animal life in the Jewel (how some locals refer to Belize), using orphaned or injured native animals in their natural habitats as happy educators for their nation.

Sharon has been a champion of Belize and the environment for over three decades now, and is a shining example of the good that expats can bring to Belize and the world.

You won’t find any elephants or lions in this zoo, but you will find more unusual Belizean animals than you ever imagined, from tapirs and jaguars to kinkajou and coatimundis.

With over 45 native animal species in residence alone, the Belize Zoo gets over 75,000 visitors every year.

Recent additions to the facilities include the Jungle Lodge/Tropical Education Center, offering accommodation for academics, students, and wildlife enthusiasts.

The zoo currently comprises 150 acres of native habitat, of which a few areas are display habitats housing the animals the public sees.

Concerted efforts are being made to acquire 945 acres surrounding the property, which would not just expand the zoo, but place it in contact with an additional 1,700-acre reserve that altogether would make for a 2,800-acre conservation parcel. 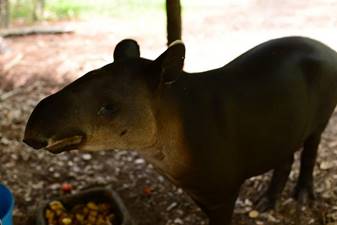 A tapir, also known as a mountain cow

Who is that guy with the Gonzo-like nose, looking like a small, hornless rhinoceros? That’s the very reclusive tapir or mountain cow, the largest indigenous mammal in Central America and the national animal of Belize.

Don’t tease him too much, though, or he’ll turn around and use his natural annoyance repellent, a heavy squirt of pungent pee that he can aim with surprising accuracy. 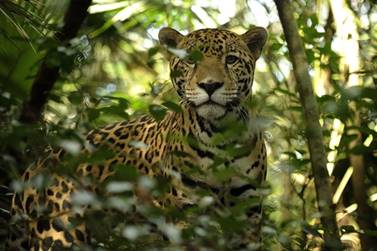 The largest jungle cat in the Americas, the elusive jaguar is the most sought-after animal for nature-spotters in Belize.

Weighing up to 250 pounds and with the strongest bite for its size of any big cat, these solitary hunters have been known to chew through steel lion traps brought from Africa in an attempt to tag and study them.

With several in residence, this is one of the few places you’ll ever see a living jaguar anywhere in the world. 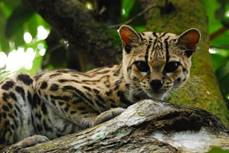 The margay (Leopardus wiedii) is a small, nocturnal
feline that weighs up to 9 pounds

These miniature, tree-climbing, and tree-dwelling cats are pretty to look at and would seem too cute not to cuddle, however, while margays can be tamed, they can’t be domesticated. 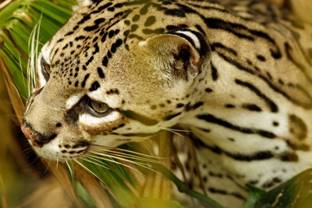 An endangered species, Ocelots are medium-sized
felines that can weigh up to 34 pounds 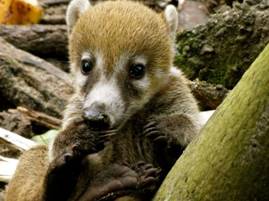 Coatimundis are cousins to raccoons. They are social animals that live in groups and grow to weigh 25 pounds.

Baby coatimundis are commonly kept as pocket-dwelling pets, but, in a manner similar to ferrets, they grow to the size of a medium-sized dog, with long, sharp claws and teeth.

Note that you should refrain from carrying a mature one in your pockets; you don’t want a hormone-fueled coatimundi in your trousers. 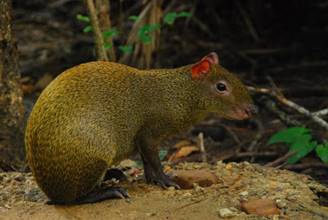 A gibnut, or lowland paca

The gibnut, also known as the royal rat, is my favorite rodent. Jaguars love them, and even the Queen Elizabeth decreed their taste was “Quite nice, really.”

This local delicacy can grow to weight up to 25 pounds and can be tamed as pets.

And speaking of non-quiet animals.. 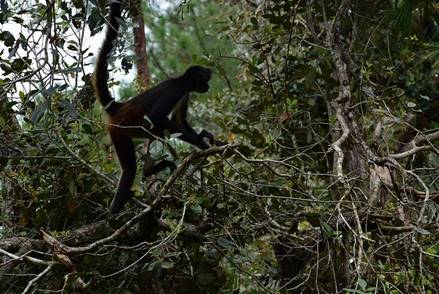 As their name implies, howler monkeys, which are medium in size and referred to as baboons by locals, have the most incredible roars that can be heard from miles away.

Sounding like a lion or bear that has got his tackle caught in his zipper, the roar of these social animals is terrifying the first time you hear it at night… especially if you’re walking around outside alone. 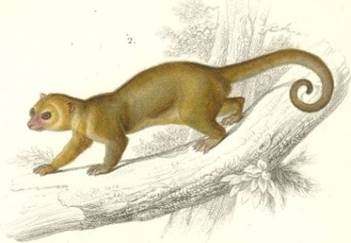 Pumas, commonly known as mountain lions, are the second largest cat native to the Americas and ferocious hunters in their own right. Pumas are less shy of humans than jaguars, but Belizean pumas are much smaller than their cousins in North and South America, topping out at about 100 pounds.

The jaguarundi, yet another jungle feline, can grow up to 20 pounds. While ocelots and margays have the coloring of the larger jaguar, the jaguarundi surprisingly has no spots, being a brownish gray.

We have a lot of wild cats in the Belize jungle, by the way… and birds, too… 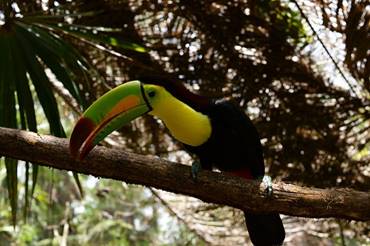 The king vulture is a large, spectacularly colored carrion bird, yet it doesn’t look like your typical vulture. 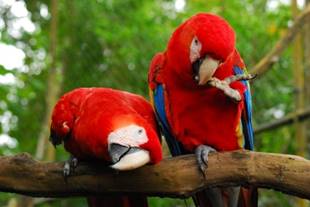 The brightly hued scarlet macaw can live up to 80 years

Scarlet macaws are endangered due to continued encroachment and poachers. These are the largest, longest-living, and most intelligent of all parrots.

One of the most stunning animals at the Belize Zoo is the incredibly harpy eagle, the largest and most powerful raptor in the rain forest.

Once much maligned locally as stealers of children (not true, but they are big enough to attempt it) these kings and queens of the air are enormous for birds of prey, and the female in residence is an amazing example—watching her fly and land on the enclosure walls is staggering.

A rescue, breeding, and education program is under way to bolster falling wild numbers.

Belize has the world’s healthiest population of these apex predators, however, habitat loss and overhunting of their natural prey (pacas, deer, and peccaries) has led to some predation of livestock.

To protect the jaguars from irate farmers, rehabilitation and relocation programs are in place.

The Belize Zoo is one of the few zoos to ever breed jaguars in captivity, and is populating zoos across the globe and improving genetic diversity with their successful breeding program.

Many of the shy jungle animals will avoid traveling out in the open and can become trapped in areas because they avoid open spaces, like pastures.

To get around this land-locking of migratory land animals and to improve genetic diversity, a wildlife reserve spanning the length of Belize was implemented to allow free movement for human-avoiding wildlife.

The zoo receives no funding from the government and relies on sales and donations to survive.

Various programs like annual memberships and Adopt-an-Animal initiatives are available if you want to give a little. Direct donations are also welcome.

Life With A View: Opening A Rooftop Bar In Da Nang, Vietnam

Opening a business in Belize can be both surprisingly easy and comically frustrating. Local knowledge is crucial, and a new...

Life With A View: Opening A Rooftop Bar In Da Nang, Vietnam