The annual Ruta Maya River Challenge kicked off this year to thunderous cheers and applause from enthusiastic adults and children. That said, some of the former were looking a bit green about the gills as they quietly nursed hangovers from the previous night’s particularly rambunctious Ruta Maya kick-off party. Sponsored by the local beer company Belikin, the party is held in the town square every year to celebrate the iconic canoe race and to get local support and spirits soaring for the four-day race. Musicians, fire-eaters, and crowds of revellers prime the mood to an electric level in anticipation of competition.

But early the next morning, they drag themselves out of bed before sun is up and prepare themselves for the gruelling day ahead or to get the best spot to watch the race.

When the signal sounds soon after 6 a.m. the canoes spring from under the Hawksworth Bridge and race downriver towards and under the low bridge that leads into San Ignacio where crowds of spectators cheer and shout encouragement. With three crew per canoe, for many it is as much a personal challenge of endurance as a race to win.

This heavy four-day, 170-mile race is one of the longest in Central America and attracts international competitors and spectators from across the globe. For the past 20 years, the race has been one of the biggest events of the year and ends on National Friends and Benefactors Day, a public holiday. The Ruta Maya River Challenge was originally conceived 20 years ago to raise awareness of Belizean products and to promote the importance of the Belize River for the coutnry’s economy and culture. 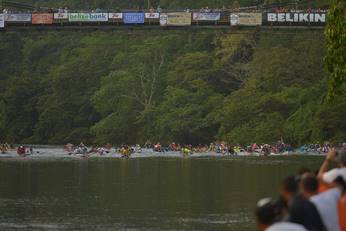 This arduous endurance test throws rapids, portage spots, station prizes, and capsizes at the competitors daily. The competition is broken into the following stretches:

Support boats, river clean-up boats, medical backup, and racing judges all make up the Ruta Maya race effort. While some teams train all year for the mission, many don’t compete to win—they are paddling for the joy of being involved in the adventure and to see one of Central America’s most breathtaking countries.In keeping with the friendly sentiment and culture of Belize, each night the competitors, support crews, and race followers camp at the riverside and party the night away together. The more serious crews often curtail the partying early, going for a good night’s sleep after a day of rowing in 90-degree heat. The bolder or more light-hearted of the crews stay up late and join the party.

Canoeing from Cayo to Belize City is an amazing way to see Belize as it was seen by the ancient Maya a thousand years ago. Along nearly the entire stretch of each day’s race, the riverbanks are speckled with spectators. Some find local watering holes by the river from which to cheer on the participants as they race past. Others set up barbecues along the shade of the river bank and have parties of their own, cheering and laughing all day and into the night.

During the times of the Maya Empires, rivers were of great importance for the local people. They provided an abundance of food and medicine and they offered a means of quick transportation across the country. Heavy goods were better transported down the river than by a hunched-over person across land. Using the buoyancy of canoes to lift the weight of their cargo, the rivers of Belize were the equivalent to modern highways, allowing trade between the empires to develop.

See you there next year!

The Mennonites In Belize: An Unexpected Jewel

One of the things I love about Belize is its capacity to surprise. The Mennonite settlement of Springfield is a...