The Secret To Profiting In Emerging Markets

Let me tell you about one of the best investing lessons I’ve ever learned.

When I was in elementary school, my family vacationed in Pula, an old Roman city on the Croatian seaside.

Right next to the old town were tall cliffs, many over 50 feet high.

Youngsters like myself would prove their courage by jumping down into the sea.

My friends and I, along with the rest of the passing crowd, would gather at the cliffs every day to admire the brave few leaping over the edge.

And the more I watched, the more I realized I must make the jump, as well.

This was a daunting thought. So many things could go wrong, and I was uncertain if I should do it. Standing on the sidelines felt much more comfortable.

Mastering all the courage of a 9-year-old, one day, after a moment of hesitation, I jumped…

Taking that leap was one of the most rewarding things I’ve done in my life. Not only did it gain me admiration from my friends, but it also taught me a valuable lesson:

Over the next two years, most of my friends made the jump, and, if I had waited, my jump would have been nothing special.

Sure, it might have felt more comfortable to follow the crowd, but I wouldn’t have gained nearly as much from the experience as I did.

The same is true for investing.

It’s never a good idea to buy something that everyone else has already invested in.

You want to be ahead of the crowd, buying first, even if this requires a leap of faith.

Investing in foreign countries is a great example. It has never been a game for the faint of heart, but those who have been brave enough to make the leap have often been rewarded handsomely.

The Next Emerging Markets’ Bull Run Is Underway

Right now, emerging markets’ stocks are incredibly cheap, and the crowd is beginning to notice.

Since the start of this year, iShares MSCI Emerging Markets ETF (NYSE:EEM) has gained 8.60%. I expect this rise to continue because the negative factors that led to the fall have shifted. 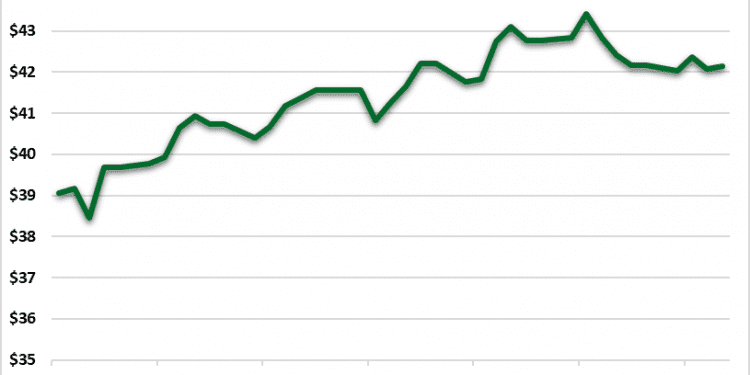 Trade talks between Washington and Beijing are on a productive path. President Xi is talking with the U.S. delegation in Beijing as you read this. There are even rumors that President Trump himself will visit China before the March 1 trade deal deadline.

With the talks going well so far, I think that, at the very least, the deadline for the agreement will be extended. This would be promising news for global trade and for emerging markets especially.

Of course, you shouldn’t rely only on politicians. They are notoriously unpredictable.

But I see other, better factors fueling a bull run.

The Federal Reserve (Fed) has stopped hiking interest rates. This is a relief for emerging economies, which have preferred to borrow in U.S. dollars over the last decade. With rates holding steady, these countries can finally stop worrying about the interest payments on their loans becoming more expensive.

The markets’ reaction to the news has been positive, and EEM quickly staged a reversal in the form of a double bottom, one of the best possible chart patterns. 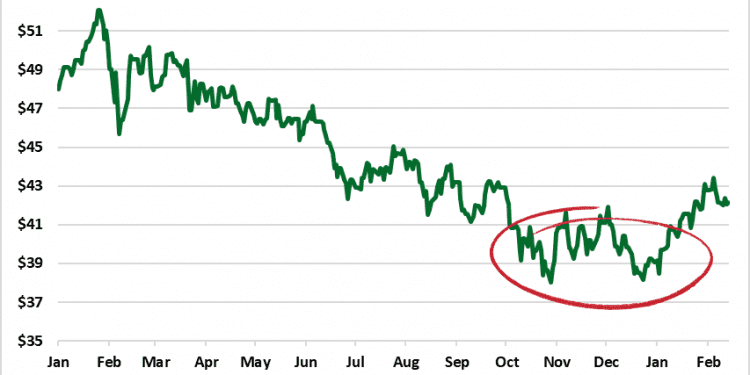 The way to invest in a double bottom pattern is to wait for the price to break above the previous high. In EEM’s case, that number is $42.15, and the breakout happened on Jan. 30.

This is the beginning of the emerging market bull run. If you want to get in first, the time to act is now.

The multiples at which these markets are trading are considerably more attractive than those of their U.S. counterparts.

If you compare the price-to-earnings (PE) ratio, EEM is trading at a 46% discount compared with the S&P 500. The price-to-book (PB) ratio is even more attractive, with a difference of 52%.

Remember the fundamentals. These are rapidly growing economies, with emerging middle classes and young populations. These are the economies that will expand the most over this 21st century, not the aging Western civilizations.

I’ve traveled extensively through many emerging countries over the last couple of years to see the development for myself. I understand the importance of being first.

In 7 Emerging Markets You Can Get For Pennies On The Dollar, I detail the best first-mover opportunities available. They won’t be early buy-ins for long. One of the stocks is already up by 44.81% for the month.

How We Choose An Overseas Property Investment

Keep Your Money From The IRS With Overseas Real Estate

8938. That is the number of the IRS form you have to fill out to report foreign financial assets. If...

Questions You Must Ask Before Buying A Home Overseas

Find Out How To Buy Real Estate Overseas For Cash Flow

How We Choose An Overseas Property Investment