The One Indicator To Watch For Profits In 2019

Your Key To True Retirement Wealth

I’d call Leon our find of the decade.

About this time last year, Kathleen and I launched a search. We wanted to find someone with a fresh investment perspective born of long personal experience making money…

A self-made, self-proven investor… someone we could relate to and trust.

We spread word of our search far and wide. We logged many miles scouting. And we met with many promising candidates.

But it wasn’t until we traveled to Vietnam that we met the man we were looking for.

This is the guy I’m listening to as I work to expand my stock portfolio in the face of the current turmoil on Wall Street… and I strongly recommend that he’s the guy you need to be listening to, as well, for a safe and prosperous 2019.

Leon doesn’t use the methods you hear about from the talking heads. His is a strategy born of long experience with multiple triple-digit hits to back it up.

That led him to an MBA at a prestigious Vienna university…

And now I’m bringing him to you…

“A little glitch in the stock market.” —Donald J. Trump, President of the United States

“60% chance of a US recession over the coming year.” —J.P. Morgan, an investment bank

What’s an investor to think… and to do?

A market’s direction is affected by many different moving parts, from central banks’ policies to political statements and economic reports.

Let’s look at some of the major forces affecting markets today and, as a result, what we can expect in 2019.

Who’s Right… The Market Or The Economy?

A stock market is not the same thing as an economy.

We measure the strength of an economy by looking at lagging indicators, data that looks back, usually at the last quarter. The most important metrics are quarterly GDP data, unemployment rate, consumer price index (inflation), wage growth, manufacturing activity, and balance of trade.

A stock market looks at the future. Corporate earnings estimates are the focus here, as share prices largely reflect what a company is expected to earn in the future.

A stock market can be used to predict where an economy is heading… whether it will expand or contract.

If you look at the last three major market corrections that preceded recession in the United States—in 2007, 2000, and 1990—you see that, in each case, the unemployment rate was low for the time, GDP growth was robust, and wages were increasing. These are all signs of a healthy economy… yet, in the face of metrics painting a positive picture, the stock market fell and predicted the recession that followed.

We are experiencing a similar situation today, with the stock market anticipating a 2019/2020 recession, despite the positive lagging economic indicators.

So… are we in fact in for a recession, or will things play out differently this time?

The answer depends on liquidity levels.

Those who blame central banks as the cause of all bubbles and recessions are often disregarded as fearmongers and conspiracy theorists, but, the truth is, stock market rallies are primarily driven by central banks adding and withdrawing liquidity, not by organic growth, as they should be.

Indeed, every major stock market correction has come on the back of a central bank intervention. 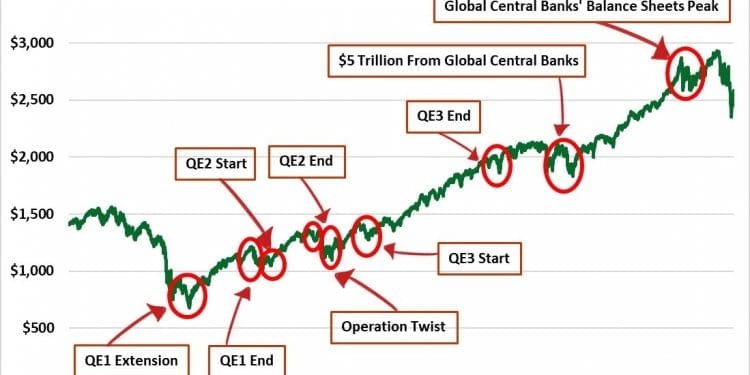 In March 2009, markets bottomed out when the Federal Reserve announced the massive expansion of its QE1 (quantitative easing) program, and they reached their peaks in March 2010 when QE1 ended.

In August 2010, markets again reversed when the Fed began hinting about QE2, which it implemented less than three months later. The rally came to a halt in June 2011, when QE2 ended.

After a sharp fall in the markets, the Fed intervened again, first with Operation Twist late in 2011 and then with QE3 in September 2012.

The latest rally came on the back of intervention not by the U.S. Fed but by global central banks, which in 2016 provided an extra $5 trillion in global liquidity, the largest combined intervention effort in history. This propelled equities to 2018 highs. Central banks’ balance sheets peaked in early 2018, as, unsurprisingly, did global stock markets.

The United States managed another short bull run thanks to the December 2017 tax cuts, but this came to an abrupt halt in September 2018, when the Fed increased its quantitative tightening program. QT, the opposite of QE, removes liquidity from the market.

And so, you see, the conspirators have been right all along. Central banks, with their power to add and to remove liquidity are the ultimate puppet masters of financial markets.

The thing to recognize these days is that the roles have been reversed. Increasingly, markets control policy decisions.

In October, Fed Chairman Powell said interest rates were a “long way” from neutral. After a brutal month, he changed his stance and claimed they remained “just below” neutral.

Then December happened, and, again, he softened his position, saying he was willing to pause rate hikes and even initiate another QE, all the while clinging to the old Fed adage “we’re looking at the economic data, not the stock market.” Proof of who’s in control of Fed policy decisions.

While the stock market might get another boost from central bank activity, it’s going to come at the cost of more debt.

Since 2007, corporate debt has doubled, and government debt continues to expand with no end in sight. It’s a never-ending game of kicking the can down the road. Instead of correcting financial excess, central banks prefer to accommodate the stock market by lowering interest rates and embarking on QE programs, with each market recovery resulting in more debt and greater imbalance.

Where does it end?

Interest rates can’t fall much further, and debt levels are unsustainable. When the debt bomb finally explodes, it’s going to blow up the economy and the stock market with it.

Most will suffer, but some will profit, because dramatic crisis creates big opportunity. From where I sit, 2019 is going to be a very good year.

Why My 2019 Diversification Plans Include Buying Stocks

Final Chance To Invest In Aquaponics Before The Price Rises

Final Chance To Invest In Aquaponics Before The Price Rises