by Kat Kalashian
in Lifestyle, Mexico
0

The stretch of Caribbean coastline along Mexico‘s Yucatán Peninsula is known as the Riviera Maya. It has been uniquely developed, over four-and-a-half decades, to offer many lifestyle options, something to please just about anyone looking to live by the beach.

The world is full of great beach destinations, though. What sets this one apart is its convenience factor.

If you’re looking to live an extremely well-appointed (but still affordable) life on the beach, the Riviera Maya is nearly unparalleled in what it delivers. The infrastructure here is excellent, familiar franchises make shopping easy, and it’s only a couple of hours from the United States for those who want to travel back for regular visits.

My colleagues and I came to the region to scout opportunities for our Global Property Advisor readers. We flew into Cancún and drove down Carretera 307 toward Tulum, tracing the path of progress on this coast…

The route begins in Cancún, the one-time fishing village identified for development by the Mexican government in 1970; at the time Cancún had fewer than 200 residents. The Mexican tourism board INFRATUR (now FONATUR) spearheaded the development and planned a city intended specifically for foreigners, both tourists and expats. 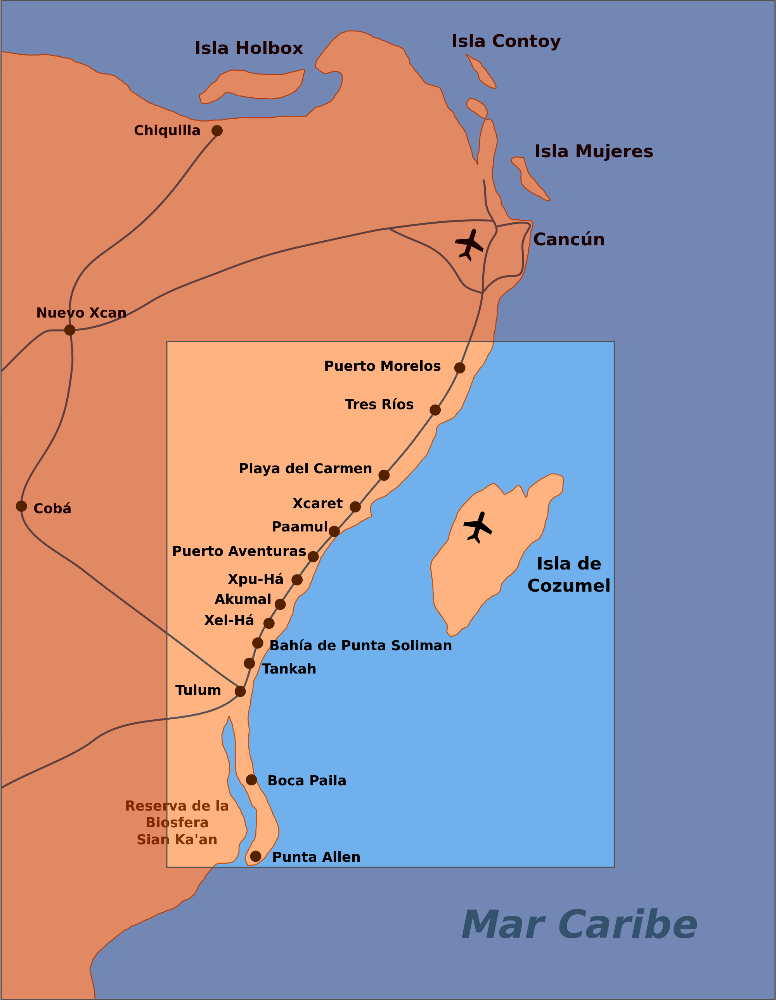 At the time, expats picking up on what was on offer here were mostly European, coming from all over the Continent. Americans and Canadians began settling over the following decades, too, but more slowly.

Eventually Cancún became saturated, and expats began heading south to Playa del Carmen, about 60 kilometers down the coast, at the time barely a village.

Today, Playa del Carmen is well developed—some would say saturated with expats and their trappings—and, as happened in Cancún, some residents are heading south, looking for some place quieter.

They’re finding it about 20 minutes down the highway, in Tulum, the next focused point of development along this coast.

Tulum also marks the end of the Riviera Maya, as the Sian Ka’an Biosphere Reserve begins just a few miles beyond the town; from there, the highway juts inland.

Access to the biosphere is severely limited, so the possibility for further development to the south is small. There is some coastline south of the protected area, but, because of the highway’s inland detour, it takes more than two-and-a-half hours to get there from Tulum. Past that point you’re in Belize.

Given that the region has been developed over nearly 50 years and as a focused government agenda, it’s not surprising that the infrastructure is impressive. The roads are high-quality, well-maintained, and even landscaped. The highway south may as well be a continuation of an American highway. Everything here is neat and orderly—from the roads themselves to the way people behave on them.

We stopped on Cancún’s main hotel strip for something to eat before hitting the highway south. Boulevard Kukulkan is lined with resorts and touristy restaurants—like Las Vegas on the beach—but, still, the meal we got (in an organic restaurant) was good and inexpensive. Our plates were about US$5 apiece, the whole meal for three costing about US$50, including starters and a couple of rounds of tropical drinks. Tourists of all nationalities walked by as we sat enjoying the pleasant weather and watching afternoon turn to evening.

Playa del Carmen, about an hour from Cancún, is a boardwalk town. Once a small fishing village like Cancún, a port was built in the 70s that offered passage to divers headed to Cozumel Island to explore the Great Mayan Reef. Playa has grown slowly since then, becoming the vibrant heart of the Riviera Maya.

Today Playa is home to about 150,000 residents (an estimated 10,000+ of whom are foreign) and is a bustling little beach town. La Quinta Avenida (known simply as La Quinta) runs parallel to the beach and is the city’s pulse, separated from the ocean by just one sandy block.

This boardwalk-like street is crammed with bars, restaurants, stores, galleries, hotels, and real estate offices, music coming from every doorway. Many bars have replaced bar stools with swings, a charmingly fun idea that you know could never work Stateside. (The lack of litigiousness outside the United States is refreshing.)

Again, we found Playa to be surprisingly cheap. There’s enough competition among the many business owners here that prices have stayed low despite the increased exposure and tourism. One point every local I spoke with made was that La Quinta is for everyone—visitors and locals alike. It’s not a tourist trap of tacky experiences at exorbitant costs; it’s truly the heart of the city.

Just 20 minutes south of Playa, Tulum feels a world away. Tranquil, less populated (population about 18,000), and boasting incredible ancient sites and natural attractions, the focus in Tulum is more on preservation than development.

Nevertheless, the path of progress rolls down the coast, just a bit more conscientiously in Tulum. Here, much land is ejido and therefore protected against ownership and development. The few large-scale developments underway are self-sustainable and designed with co-existence in mind. In fact, all of Tulum is technically off-grid… it has no choice. There is little community infrastructure; each individual land or building owner must provide his own energy and waste systems.

English could be a second language throughout the region. Thanks to the long-standing tourism industry, everyone in the Riviera Maya seems to speak it, from bus boys to gas station attendants—and they speak it well. I speak Spanish, but whenever I tried to here, I almost invariably got a response in English.

I was also impressed by the level of security evident from the moment we landed. This region is backed heavily by the Mexican government—they funded its creation and they aren’t taking any risks with their investment. Police are everywhere, but their presence is friendly, not oppressive. You don’t see beggars or homeless enclaves anywhere along this coast.

The Riviera Maya is decidedly First World. The infrastructure is just as good as the best of the United States, stores are nearly identical to those back home, food is high-quality, the people are warm and welcoming, the cost of living is low…

And it’s all right on the beach.

If you’re not up for plunging into a sea of alien culture, the Riviera Maya makes for a lovely wading pool.

11 Countries Where Citizenship Through Residency Is Easy To Acquire

Most countries make it possible to acquire citizenship through residency. After you’ve been a full-time resident of the country for...

7 Reasons Medellín Is Our Top Pick In Colombia