Vegetarian Countries Where You Can Eat Meat-Free

You Will Never Go Hungry In These Vegetarian Friendly Countries

by Live And Invest Overseas
in Lifestyle
0

For a long time vegetarianism and veganism were seen as something of a fad. Today it’s a growing trend that looks likely to shape our eating habits in the years to come. Vegetarian culture is spreading through society at great speed. We take a look at some of the best vegetarian countries to visit and what you can eat there.

There’s lots of reasons people are turning to a vegetarian diet. These range from health benefits, to saving the environment. Here, we look at some of the main reasons people decide to give up eating meat, dairy, and animal byproducts.

Images of factory farming can be harrowing. In order to satisfy the demand, animals are often kept in undesirable conditions. Some of these animals never see the outside of the barn they are being kept in. Some are even confined to small cubicles their whole life. Organic, and free range, produce has become more popular but it’s expensive. Factory-farmed meat is cheap, so there will always be a market for it.

Others are not comfortable with the moral implications of killing an animal for food. Animals feel a range of emotions and are sentient beings. The pain and suffering caused by killing animals can be a major reason for choosing not to eat meat. This argument goes both ways as animals are happy to eat other animals.

Vegetarianism is a part of a few religions. In religions, it is fundamental. Hinduism is famous for forbidding the eating of beef. Hindu’s regard the cow as a sacred animal. In the Hindu parts of India, cows are given free roam to go wherever they like. As a result, they can turn up in the most unexpected places. Hindu scripture also promotes vegetarian ideals. For this reason many, but not all, Hindu’s are vegetarian.

Buddhists are also likely to be vegetarian since the Buddha was against the eating of meat. He believed enlightenment and eating living creatures were incompatible.

Judaism also recommends a vegetarian lifestyle. The Torah says that Adam and Eve were originally vegetarians. Although vegetarianism is not strictly part of the religion, it’s supported by many of the teachings.

Vegetarians and vegans are likely to eat less saturated fat and cholesterol. This decreases the chance of high blood pressure. Non meat eaters are also likely to have a lower body fat percentage.

Vegetarians find it easier to reach their recommended portions of fruit and veg each day. Meat eaters can also do this though.

Vegetarians do need to make wise choices about their diet to ensure they are getting all the nutrients they require.

Studies have shown that vegetarians have a lower risk of developing different cancers when compared with meat eaters. Although vegetarians can be to 15% less likely to develop most cancers they are more likely to suffer from colon cancer than meat eaters.

High profile athletes are also turning to a vegetarian or vegan diet to improve performance. Lewis Hamilton, credits the most recent of his five F1 world championships to becoming a vegan. Tennis superstar Venus Williams, footballer Jermaine Defoe, and boxer David Haye, competed in their sports on a vegan diet. Bodybuilder Barny du Plessis has found success on a vegan diet, ending the myth that eating meat is an essential part of building muscle. As du Plessis points out, the world’s strongest animals are all plant eaters.

Raising cattle for food has a huge impact on the environment. Grain and land are increasingly at a premium, and cattle require vast amounts of both. Cattle also contribute to the rise in greenhouse gas, thanks to the amount of methane they produce. While pork and poultry farms are less damaging to the environment, they still cause more damage than arable farming.

Cattle are also polluting our waterways. Animal waste, and also the potent mix of chemicals used to spray their feed crops are the biggest offenders. These are often washed into the waterway, contaminating rivers, lakes, and streams. This can cause algae to thrive and nitrogen levels in the water to rise. In turn this can have a deadly effect on native fish populations.

It’s not just vegetarians and vegans in Ireland who are shunning meat. Ireland has a fast-growing ‘flexitarian’ population. In case you’re not familiar with the term, a flexitarin is someone who actively tries to limit the amount of meat and dairy in their diet. However they are not so strict that you won’t occasionally see them tucking into a quarter pounder burger with cheese and bacon.

Brazil is the only South American country on the list of the world’s top 10 countries of highest percentage of vegetarians.

A useful tip for surviving as a vegetarian in Brazil is to make sure you know the way to your nearest Por kilo restaurant. They’re a chain of restaurants that you can find in big cities and small towns alike. Por kilo is a buffet restaurant, with extensive salad bar. Although they serve meats and fish, you can find loads of fresh fruit and veg, as well as pasta, rice, chips. They charge you by weight of the plate, so keep this in mind when you’re making your selections.

Juice bars are everywhere in Brazil. Mixed with blended ice, they are very refreshing. Tropical fruits grow throughout the country and you can pick up a range of fresh juices at a very reasonable price. Açai berries, which are full of anti-toxicants, and very expensive outside Brazil, are widely-available and affordable.

Ten percent of the population are vegetarian in Italy. Finding vegetarian food is easy, and most restaurants will have at least a couple of vegetarian, and a vegan dish.

Italy is top destination for all food travel, and vegetarian and vegan visitors are in for a treat. Interestingly, vegetarian culture actually goes back to Roman times. Gladiators ate a largely vegetarian diet, according to scientists. After analyzing bones from gladiator burial sites, they concluded that they seldom ate meat. This may have been a cost cutting measure by their owners. Others followed the Greek philosophy of vegetarianism as a way to avoid inflicting pain and suffering.

There are a great range of vegetarian pizza’s in Italy. Vegan pizza, with tomato sauce and various herbs and vegetables is easily available. That said, Italy is a better country for vegetarians than vegans, thanks to the quality of cheese. Mozzarella, is at the heart of many of Italy’s classic dishes, and compliments so much of the cuisine here.

India has the highest percentage of vegetarians in the world but it’s worth pointing out that it is not some kind of vegetarian utopia. Young people are eating more meat, and there are areas in the country where vegetarians are in the minority.

That said, India is a great place to go for vegetarian food. From the staple of Dal Chawal (lentils and rice) to vegetable biriyani, Indian vegetarian food is world-renowned.

Pasta is a staple, but be sure to check it’s made with dried and not fresh pasta if you’re vegan. Fresh pasta uses eggs. Another good tip is to check the appetizers for vegan options. You can find some great options here

As a multi-cultural and forward looking city it’s no surprise that Singapore has an appealing range of vegetarian options. Food in Singapore has benefited from a range of influences, from Chinese, Indian, Malay, Japan. As a major trading port there are even influences from as far away as Europe.

One of Singapore’s most popular vegetarian dishes is the potato curry puff. Made from curried potato rolled up in a pastry crust this is one of a great snack, popular with vegetarians and nom-vegetarians alike.

Apps such as Happy Cow can help you locate vegetarian restaurants in your vicinity.

The first thing to remember is that Mexico has a range of delicious tropical fruits to enjoy. In the cities and big towns, street vendors are everywhere, selling seasonal fruits. This is a very budget friendly way to get your food thanks to the sheer volume of fruit that grows in Mexico.

One thing to be aware of is that lard is often used in Mexican cooking. If you’re eating out then this is a definite risk and something you may want to ask about before you order. It’s not only fried food that uses animal byproducts. Soups are often made with chicken bones or stock, even if there’s no meat advertised in the soup.

There are lots of Mexican staples you can customize to make them vegetarian friendly. Tacos, Tostadas, and Quesadillas can come with only vegetarian fillings. Happily these are also cheaper than going for the meat option.

Portugal doesn’t have much history as a vegetarian country. The people are very fond of seafood, and tend to load up their plate with meat when they can.

Most Portuguese soups are vegetarian, and the national dish Caldo Verde, is one of the best. Translating as green broth, it’s potato soup with kale, onion, and garlic.

2016 was a breakthrough year for vegetarians and vegans in Portugal. After a petition from the Portugal Vegetarian Society, a law passed. All public institutions must now serve at least one vegetarian, and vegan option. Restaurants and cafés are moving with the times too. Vegetarian and vegan meals are finding their way on to the menus more often. This is big progress considering Portugal has no tradition of a vegetarian culture.

France has a tendency to confuse vegetarians with pescatarians. Pescatarians are people who will eat fish, but of course, fish are an animal.

Despite the quality of French chefs, the attitude towards vegetarian food is one of bemusement. Supermarkets are better, and have plenty of soya products. You can live a vegan life in France but you might not be able to eat out often.

In most countries, cheese is a safe and reliable option for vegetarians. In France you need to be super-careful. Most cheeses made in France contain rennet. This is an animal product, used to help cheese solidify. Unless you know for a fact that the cheese is vegetarian, it’s worth assuming that it isn’t. 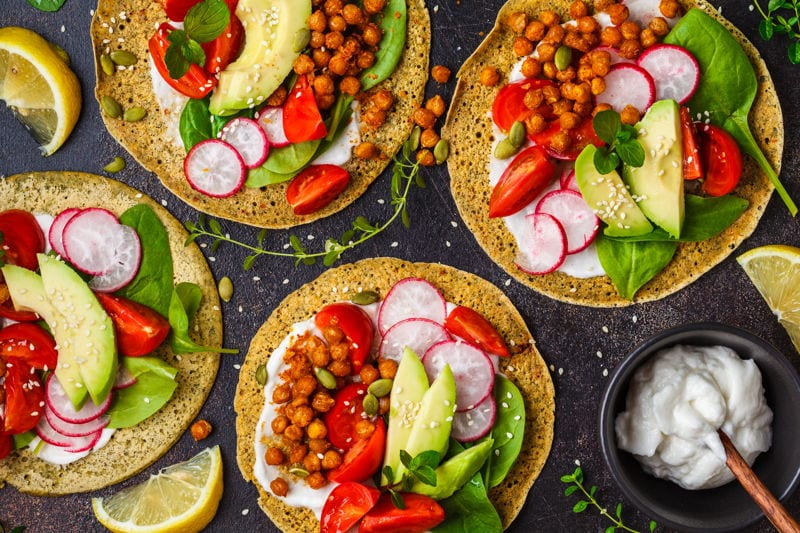 Article Name
Vegetarian Countries Where You Can Eat Meat-Free
Description
A look at some of the best countries for vegetarians to visit or live in. Find out which countries have the most vegetarian options and their speciality dishes.
Author
Oliver Lovett
Publisher Name
Live and Invest Overseas
Publisher Logo

Easy Ways To Make Money In Retirement From Your Hobbies

With more than 100 miles of coastline, Portugal's Algarve coast offers every kind of beach you can imagine. Whether you...