When Roman Centurions Take To The Streets

by Kathleen Peddicord
in Lifestyle
0

— A hand-written entry in the flyleaves of “Guatemala and Her People of Today,” made by a traveler to Antigua in 1913; the book was discovered recently in the library in Antigua

“I was sequestered in my house,” writes Guatemala Correspondent Michael Paladin, “as the sounds of the nearby procession passed in the calle outside. The pounding beat of the drums served as a two-step march for the 70 men carrying a 60-foot wooden barge on their shoulders. The brass band to the rear of the bier played a doleful dirge, heavy on the lower bass notes, and the echoes vibrated off the adobe and stucco walls of the houses along the route. 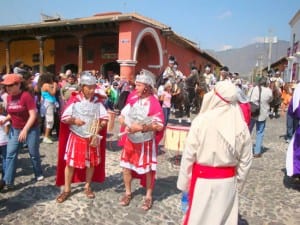 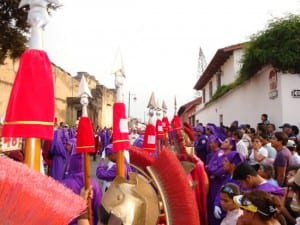 “This was my situation again and again last week.

“Three times the parade route closed my corner of the street, 50 feet away. One had to wait for an opening in the crowd, then an open space among the band members, and then make a quick dash across the street.

“The Roman soldiers would pass first. After they’d gone, you no longer had to worry about taking a spear or a slash of a sword as you made a run for it. Even though they were only wooden replicas, the spears were well made, and I imagine it’d smart if they got you.

“These serious full-dress parades were a daily occurrence throughout the week leading up to Easter, but the season started back in February. 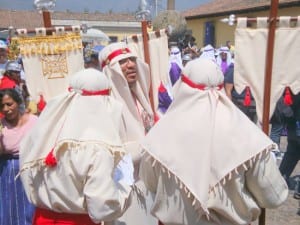 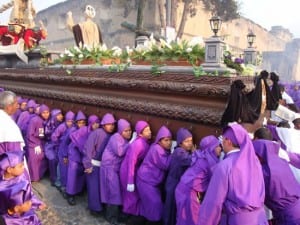 “Last Sunday, Palm Sunday, I walked the two blocks west to La Merced, one of the largest churches (and still functioning), in this city of more than 30 ruins of same, for the 10 o’clock morning procession featuring the life-sized wooden and gilt statue of Christ bearing a massive golden wooden cross on his back.

“To the front was a life-sized purple- and white-gowned wooden carving of a grieving Mary, to the rear a full-sized golden angel hovering. The bier, on rollers, emerged from the inner darkness of the church and ran onto the steel rails protruding from the door to the front steps. Funereal music blared from big speakers mounted on stands. A squad of Roman Centurions, dressed in red cloaks and bronze-colored breastplates, kept the crowd hemmed in by holding their spears at the horizontal.

“Their officers, attired in black cloaks, silver armor, and black-feathered helmets, watched nervously as the purple-cloaked acolytes took their places on either side of the barge that was slowly moving into the sunlight.

“With a practiced move, 70 men dipped their shoulders and slipped under the sides of the long, dark, heavily carved ship. It rose slowly until it was level and the strain was evenly distributed. The music changed to a slow, throbbing drumbeat…boom, boom…boom, boom…and the bier moved forward. 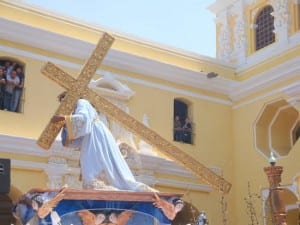 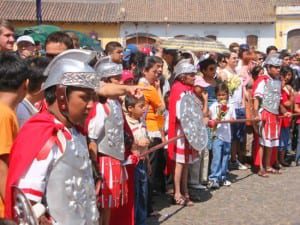 “Photographers circled as wolves to a flock of sheep, their long hooded lenses pointed like muzzles. The watching faithful began to follow the procession, which was making a slow left turn. With these narrow streets and tight corners, turning a 60-foot-long vehicle weighing a few tons requires a stop and a small turn…then a backward motion and a stop…then a small forward motion…and a stop. And again. Of course, the cobblestone streets are uneven and concave, so the barge dips and rises, as if it were a ship on stormy seas.

“I thought that was the last of Jesus for the day, but I was wrong. I walked over to the other side of town, seven or eight blocks away, for a rendezvous and a cocktail. There I met the same parade, with the purple-clad incense burners in front, followed by the Roman guards and then the lighted (it was dark now) display of the same gilded figure and massive cross, followed by the umbilical cord of the noisy generator, the brass band, the cymbals clashing, the drums pounding, carrying up the rear…

“Fine…it was worth seeing again, even if the clouds of incense were obscuring the street lights.

“My rendezvous concluded, cocktails ingested, I walked back to my starting point…and I ran into the procession again! Coming down my street, past my front door. Ah…they were returning the barge to where they had started out, eight hours later. 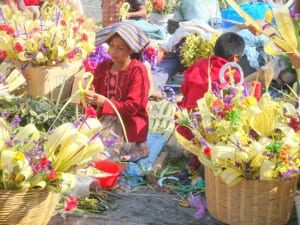 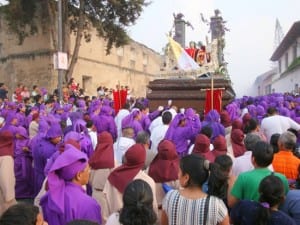 “My neighbors had created a series of alfombras, those intricately designed stenciled sawdust patterns that take hours to make and that are then crushed by the marching processions.

“To create an alfombra, a center portion of the calle is marked off, and a layer of fresh pine needles or sand is laid down. Over that is layered carefully leveled sawdust, and then the real work of designing the pattern begins.

“Families gather to the side to watch and to advise, babies in strollers, men remarking on the right amount of color and sawdust required to perfect the temporary work of art.

“Every street has a different style and pattern. On the main avenues of the processions, the carpets can be 50 to 60 feet long. The scent of the freshly cut pine needles is reminiscent of Christmas. 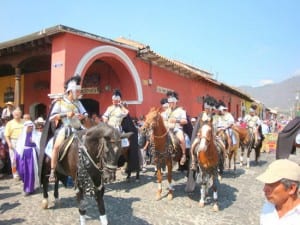 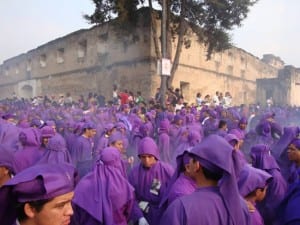 “Once the procession has passed and these ephemeral multicolored carpets have been trampled, the municipal fleet of garbage trucks follows closely behind, day and night, scooping up the remnants. Would the Prince of Peace have favored overtime?

“At last, the season has come to an end.

“Since the 20th of February, this town has seen 25 full-scale processions and 40 other events. Every church in and around Antigua has hosted celebrations.

“The purple, brown, and black costumes are being stored away now in closets for next year. The Roman cloaks and spears are being put away. The town is returning to business as usual.

“Maybe there will be a parking space in the morning.” 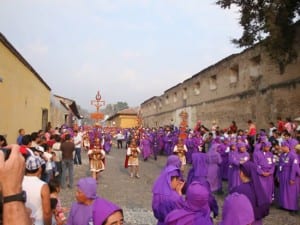 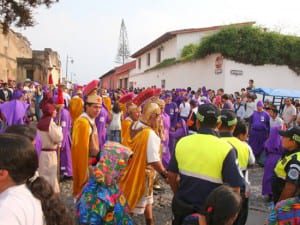 “Kathleen, my wife and I are seriously considering a permanent move to France (Charente Maritime). We currently live in the Netherlands. We have been visiting Corsica for nearly 40 years and have lost count of the number of times we have visited. We love the island, particularly the northern half (Porto, Calvi, and Centuri, up in the Cap).

“The leaseback offer you wrote about recently seems very interesting. I have read on and off for many years your and Lief’s write-ups on the French leaseback, but I have never studied it seriously, as I was not too interested in this from an investment perspective.

“Before I register interest on the development’s website, I have a few general questions:

Really, it doesn’t make sense to buy a leaseback for 100% personal use, as the prices including VAT are generally higher than what you’d pay for a comparable standalone property. Plus, typically, these aren’t places you’d be comfortable living full-time.

You own freehold. What you’re buying is essentially an apart-hotel room, so, while you own it and can sell it whenever you like, it’s subject, even if sold, to the lease with the management company.

Our contact reports that, as of this writing, only 2 of the original 25 in inventory are available.

“Guys, I am convinced that Panama will be my next destination. I am pleased with the amount and quality of the information that you have provided me with thus far.

“As a part of my forward planning, I need to know about the automobile industry with respect to what is available in Panama. As a sampler, kindly let me know if there are any Lexus dealerships in Panama and the base price of a 2009 LX570. This is a need-to-know for me because, if the price is right in Panama, I would not need to think about shipping a motor vehicle from the United States.”

“In other words, dear Panama Circle Member, you’re likely better off importing a car with you, taking advantage of the import tax benefits of your visa status. If, eventually, you decide you don’t want or need the car in Panama, it sounds like you’d be able to resell it for a nice profit!”