The #1 Beach Destination In The World: El Nido, Philippines

by Live And Invest Overseas
in news
0

CNNGo, Condé Nast Traveler, and several other travel Publishers agree: El Nido, in the province of Palawan, in the Philippines, is the most beautiful beach destination in the world.

A bold statement, since there are many other beaches around the world that are great contenders to El Nido. The Pansy Islands in Mozambique, Blue Beach (or La Chiva, in Puerto Rico), Praia Mole and Ipanema in Brazil, Los Roques archipelago in Venezuela, are all good examples. Even the local beaches are potential competition, as the Philippines boast more than 7,000 islands in its territory. No wonder they were ranked as the 5th happiest people in the world by Gallup’s Positive Experience Index.

But what could possibly put apart El Nido from all of the other natural beauties the world has to offer?

Think of a super exotic location, far away just enough from the bustling cities. After you pass the beach town, you encounter yourself with a pristine, white sanded group of beaches, with glass-clear calm waters. Further, they go all kinds of shades of blue. But that’s not it… 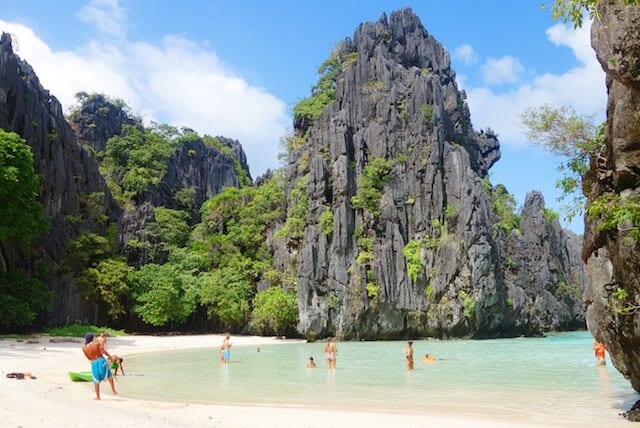 What’s All The fuss About El Nido’s Charm?

It’s the views. It’s the atmosphere. It’s massive limestone karst formations and cliffs. Bottomless lagoons like the Cadlao and Big Lagoon. Caves so that go back to the late Neolithic age, and dramatic waterfalls like the Nagkalit-kalit Waterfalls. El Nido makes a unique, a one and only ecosystem that you won’t find anywhere else on earth.

CNNGo stated El Nido has become popular in Hollywood, with scenes for “The Amazing Race” and the “Bourne Legacy” produced there.

In such a remote part of the world, you could say you could get bored fast, but there’s so much to see and do in El Nido. As a matter of fact, most traveling experts recommend staying a bare minimum of a week to be able to scratch the surface of what it can offer.

To get there, you measure your options between land, air, and water. The preferred and less costly option is taking a bus from Puerto Princesa, a trip that takes around 6 hours and costs around 15$. For the traveler that puts comfort first, a direct flight from Manila or Cebu costs around 120$ depending on your location, and season. There are boats to El Nido from Coron, but they are commonly disregarded as trips take 7 to 10 hours, depending on weather conditions. Also, the bus ride is cheaper and seasick-free.

You arrive into Población (Town Proper), where you can then choose between a menu of accommodations, ranging from cheap hostels, beach and over-the-water huts, or even beachfront homes. In some spots, you can even camp!

From there, you can plan tours or your own path of adventures through the island, and this is why travelers recommend at least staying a week. You can: 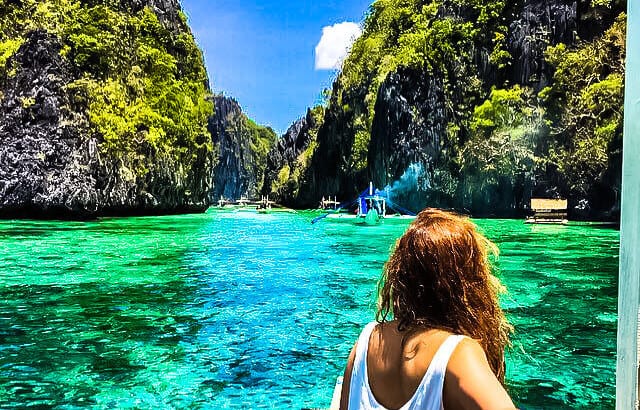 Take a swim in the Large Lagoon:

Heralded by many travelers alike as the first and “must go” experience in El Nido, the Big Lagoon rests between large formations of limestone creating an Avatar worthy experience. “Picturesque”, “awe-inspiring”, and “most beautiful place on earth” are used titles to refer to this breathtaking place.

With shallow, pool-like turquoise waters, you can take a dive in this piece of paradise on earth, and/or rent some kayaks and stand up paddleboards for that extra kick. Rental prices range around 500 pesos (app. 3$).

It can only be accessed by swimming, so you have to have a guide and life jacket if you are not the swimmer to help you reach it. But it is told to be worth all of the trouble. You swim across a little cave that “hides” the beach inside. It is truly a magical place (when out of touristy times).

Also, a place that can only be reached by swimming or kayaking, as it is too small for boats to pass through. It is hidden between the tremendous black, karst rock formations around the island; and makes for a wonderful place, full of magic colors.

A popular island for lunch stops between island hopping tours. Out of touristy times, the island is a pleasure, as it is as small as beautiful. Named after a known Japanese diver who died inside an underwater tunnel on the island. The beach is a little stretch of white sand enclosed by gigantic rock formations and nature. People tend to like visiting the island for snorkeling, besides the super fresh seafood.

The easiest spot to go in the island is also one of the prettiest. You can go on a 45-minute tricycle ride, which is the preferred method of transportation as the las stretches are quite bumpy and harsh for vehicles. If you are feeling adventurous, renting a scooter for the day (around 10$) can do as well.

After you make it, you will be greeted by a long shoreline, full of white sand as far as the eye can see. Lined by palms, and hilly neighbor Nacpalitan, you can hike up to get a dramatic, post-card view of the two twin beaches.

Also known as Vigan Island, this particularly little island boasts a long sandbar that connects back to El Nido. Under the right climate conditions, a perfect white, snaky line can be seen going from the mainland to Vigan Island, and this passage is the boom for tourists.

The water is calm, crystal clear, and the sand white. Some say it’s the perfect place in the world for desktop wallpaper worthy panoramic photos.

What To Know About El Nido

El Nido is a very remote destination in the Philippines, so it’s good to know that infrastructure is going to be generally poor. Most businesses and the government seem to be working in ways to improve it, though.

For example, up until November 2014, electricity was rationed in El Nido, only through 2 pm and 6 am. Now, electricity is 24/7. Outages are a probability, but many places and venues have their own generators.

Things like ATMs, up until October 2015, were inexistent. Still, there’s reportedly only one ATM in the whole town, located in the Municipal Hall. It is still heavily advised to bring your own money to cover your expenses in El Nido. ATMs in remote destinations tend to be out of money, and it can take weeks to see them refilled.

Communications are a little complicated. You can manage to get internet connection in el Nido if you buy yourself a prepaid SIM card from SMART. A Portable Wi-Fi can be a good idea for this travel. Hotels may or may not have internet, and it is as reliable as electricity.

Have in mind El Nido has very low infrastructure, and that’s the whole idea, really.

Generally, costs depend on your lifestyle choice. They can be really cheap while they can be 5-star costs.

Tourism costs also depend if you reserve tours with mainstream guides from the internet and on-site, from 20$ to 40$ depending on where you look. Private tours, which are the best for experiencing El Nido without the bustling fellow tourists, will cost you even more. They might be worth it if you value quality time in the spots the island has to offer.

There are even more spots in El Nido to discover. Secret Lagoon, Taraw Peak, Cabanas Beach, the Matinloc Shrine, Hidden Beach and the Nagkalit-Kalit Waterfalls are some of the other activities you can cover that offer ecoadventure at its finest. All for great prices.

Also, if you are the exotic foodie type, you can try dishes like Banana Flower curry, Tarantula, and Balut Egg.

This menu of experiences is what make El Nido, Philippines, the king of beach destinations in the world. It should easily top your list (and anyone’s list) of things to do before you die!

Investing In Colombia: The Secret Is Already Out

This list will be unsurprisingly similar to our article about the best destinations for Canadians to retire to. We’re keeping...

The Top 10 Greatest Advantages Of Living In Europe

Our Most Popular FAQs On Moving Abroad: Portugal Edition

The Real Estate Market In Panama Is Recession-Proof, Take Advantage Of It Now

The Truth About Moving Abroad And What It Really Means

Investing In Colombia: The Secret Is Already Out