by Live And Invest Overseas
in Lifestyle, Retirement/Living
0

“This is my third day on the road,” writes intrepid Correspondent Paul Terhorst, “and so far, Laos seems to be remarkably easy travel…adventure travel without the hassles.

“The Chinese, Japanese, and others who want to export to Laos have helped to build roads, bridges, and even buses that make overland travel comfortable. I’m taking advantage of the new infrastructure at ground level, to explore beyond the tourist spots.

“In a Lao town (Luang Nam Tha), near the Chinese border, I walked into a Chinese pharmacy and realized that it also seemed to be a street-side clinic. See pictures.The clinic had two patients, one on an IV who was smoking a cigarette. 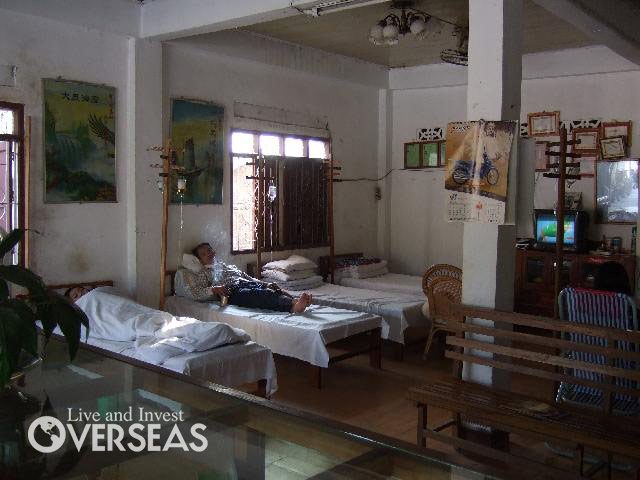 “I asked for loratadine, a widely used drug for hay fever and other allergies. The attendant in a white smock handed me the drug guide. I found loratadine in the English index and turned to the page. Everything else on the page except ‘loratadine’ was in Chinese, so I handed the book back to the medical man. He went to his cabinets but, in the end, shook his head.

“I noticed a sign in English on a recently completed two-story brick house in the center of town: ‘For Rent, $200 a month.’

“In a tribal village farther south I watched a ball game that kicked off a New Year’s courtship rite. Sixteen-year-old girls, some in short white skirts, others in colorful tribal costumes, warmed up for the event by tossing a ball back and forth. See pictures. 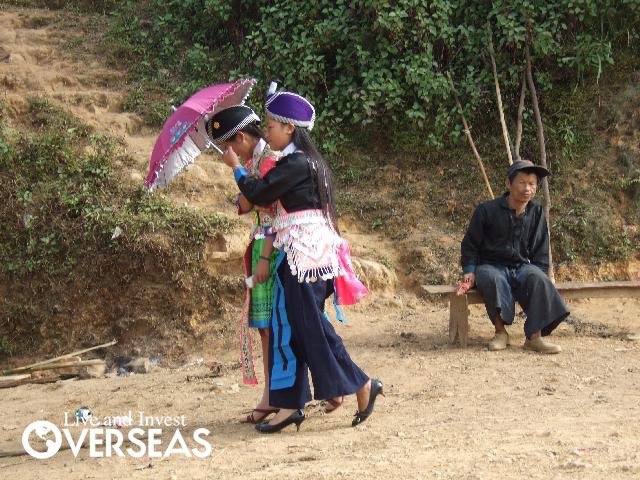 “Then the boys–pimply, red-faced, wearing street clothes, and way more ill-at-ease than the girls–showed up. The boys and girls formed two lines facing each other. Balls sailed back and forth, along with banter and giggles. Soon couples formed, and leftover boys and girls somehow disappeared.

“I’m short on details here, but I think the ball game is the Lao tribal version of ‘will you be mine?’. The game took place in the heart of the village, with mothers, grandmothers, and little sisters looking on. The girls’ moms were easy to spot, their sharp eyes registering every detail, raw emotion knifing through them. The men carried on their normal activities; they hardly seemed to notice. 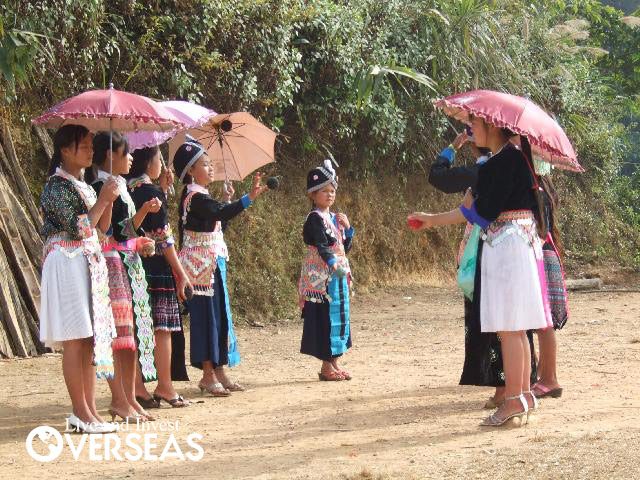 “Next stop was a tiny village (Nong Khiaw) in a spectacular setting on the Ou River. See picture. I ran into adventurous European kids, four boys and two girls, who had bought two wooden boats to paddle downstream. They figured the trip downriver to Luang Prabang would take five or six days. I asked where they’d sleep. 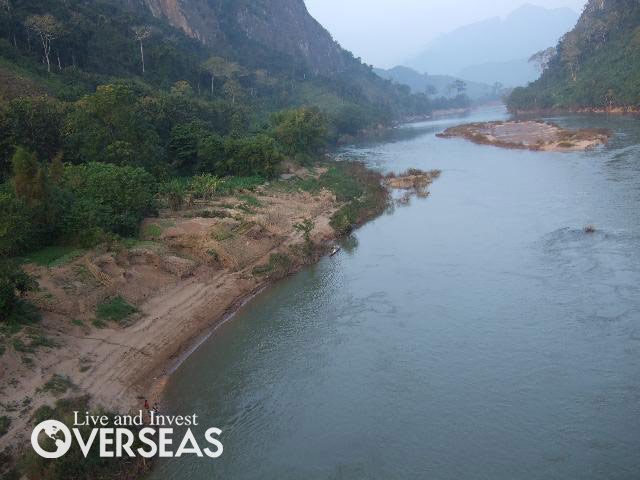 “‘We’d like to sleep in guest houses or home stays, if there are any. If not, we’ll stop at some village and get the head man to let us stay in his hut for the evening.’

“After the trip they hoped to sell the boats for a profit–an important part of the plan–so they could travel longer. I asked these and other kids I met which Southeast Asian country they liked the most and which they liked the least. Vietnam came in as least favorite, while, overall, they chose Laos as the best country in Southeast Asia. They like the friendly Lao people and the unspoiled lifestyle, especially in the primitive hill-tribe villages.

“The kids (and I) met hill-tribe villagers who’ve never lived anywhere except in bamboo huts in their native villages, who’ve never seen indoor plumbing or an electric light bulb. The villagers use firewood for cooking, because there is no natural gas or electricity.They believe rain dances help to make the monsoons come.

“Next day, along with friends Roger and Naree, we rode in the back of a packed truck to Luang Prabang. We sat, squished together for three hours, on narrow wooden benches. Women on board were carrying their goods to market. Roger, Naree, and I were heading to our next stop, with all our gear. At one point, I put my small pack on top of one of the women’s market bags. The woman protested to Naree, who told me to move my bag. I did, but my bag kept sliding over on top of hers.

“Finally, we looked more closely at her market bag. Something was moving inside, something alive. Naree speaks Thai and a little Lao, and she asked what it was.

“‘An own.’ That’s the best I can come to representing the sound. But we had no idea what an ‘own’ was. Two days later Roger came back to the guest house after walking through the Luang Prabang market.

“‘I saw an own,’ he reported, ‘skinned and ready to cook, with big buck teeth. Perhaps even the same one that lady had in her market bag.’

“He’d also seen rats piled up in the market and civet cats and other wildlife for sale. I’m guessing the ‘own’ was a woodchuck or a groundhog or something similar from the squirrel family.

“In a mild climate like in Laos, they’d hibernate only a few months. This was just before hibernation, when they’d be at their fattest. The Lao woman simply took advantage. She captured one and schlepped it off to market.”