After work Friday afternoon, Lief and I loaded Jackson, our overnight bags, and Jack’s beach things into the back of the car and headed west on the PanAmerican Highway. We were on our way to check on progress out at Los Islotes.

For more than two weeks, since the start of the New Year, we’d been delighted by the day-by-day with reports from the scene from Project Manager Gary Moseley. “Today we started cutting the roads into Phase 1,” Gary reported one day. “We’ve moved so much dirt in the past few days!” he exclaimed another evening when he called to check in. 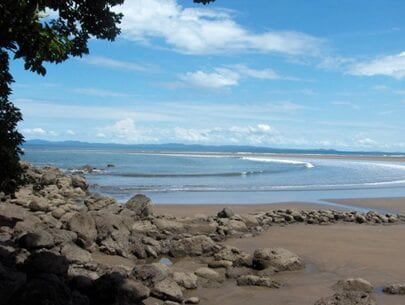 “Things are taking shape,” he told us most recently. “The really good news is that we haven’t been exaggerating when we’ve told people that nearly every lot on the property has a great view. Now that we’re clearing away some of the brush, the perspective is changing. ‘Wow!’ is all I can say. Some lots of 360-degree views. It’s something to see.”

Indeed, we wanted to get out there to see for ourselves, so, Friday, we drove from Panama City to Santiago. Until we build a place to stay of our own on the Los Islotes property (more on this in a minute), Santiago is the most comfortable place to overnight in the area, especially since the opening of the new Mykonos Hotel in this city. I don’t really get the Greek theme at work at the Mykonos, but I greatly appreciate that the hotel is now in operation. It sets a new standard of accommodation in this part of Panama (and rooms are only US$75 a night, a bargain considering both the property and the service).

When the Mykonos opened a few months ago, Lief and I wondered about its prospects. Again, we were awfully glad to have it as a place to stay, but, while every other hotel in Santiago is a couple of dozen rooms or so, the Mykonos has nearly 100! How will they fill all those rooms, we wondered, worried that they wouldn’t be able to stay in business.

We shouldn’t have been concerned. We got the last room in the hotel when we called Friday morning to make the reservation. A Ministry of Education conference and a rally for President Martinelli had every hotel in Santiago just about fully booked, including the Mykonos. This isn’t uncommon, we learned, asking around. It seems this was the plan all along. More and more groups from Panama City are looking for options for places to hold meetings and conventions. Santiago is emerging as a top alternative.

Indeed. Panama City is an increasingly urban and gritty place to be. Santiago, while one of the biggest cities in the country and, by some accounts, the fastest-growing destination in Panama, is still very much in the country. From the window of our room at the Mykonos we had views of cow pastures all around. Driving into the city Friday evening, we watched the local farmers harvesting their sugar cane.

Saturday morning, we made the drive down the east coast of the Azuero Peninsula from Santiago through the little towns (villages, really) of Mariato, Malena, Torio, and, finally, Quebro, to reach the turn-off to Los Islotes. We saw Gary’s handiwork straight away. Wide new roads led us into the property. We three hopped out of our car and into Gary’s truck for a complete tour of Phase 1, possible now thanks to the new roads.

We’d come to see the roadwork for ourselves, but also to finalize the lot selection for the Founder’s Lodge we intend to build now. “I recommend you look at lots 1, 2, 9, and 10,” Gary suggested. They sit along a ridge that I think would be a great choice for where to locate what you want to create. Lots 3, 4, and 5 would be great, too, but they’re spoken for,” he added.

We started at the edge of lot 1 and climbed the ridge through to lot 11. As Gary had explained, now that some of the underbrush has been cleared away, the views both of the Pacific Ocean in front and the mountains behind are even more impressive than we’d expected. When we reached lot 10, I was particularly taken.

“This is it,” I said. “This is where we should build the initial small clubhouse and guest suites we need. Let’s get the dimensions and the topographical details to Ricardo, our architect, this week. The sooner he can begin designing, the sooner we can break ground on the structure.”

That agenda item taken care of, we wandered around the property a little more, enjoying the increased access. Some of the land we explored on Saturday we’d seen in the past only on foot and with the help of a machete to clear the way.

“It’ll be a year at least, thinking realistically, before the Founder’s Lodge is finished,” Lief mentioned as we were driving around. “In the meantime, it’d be nice to have a place to come out for picnics and visits with friends. Let’s build something up on that high point over there, a simple open-air structure with a red clay-tiled roof where we can sit and enjoy a cookout or a rum and coke as we watch the sun set over the ocean.”

“I can have that spot cleared in a few days,” Gary added. “And I can bring in some guys to build whatever you want as soon as you send me a drawing to work from.”

We’re on it. Now that dirt is flying, Lief and I intend to be out at Los Islotes at least twice a month. We’ll need to create a place where we, the kids, and friends who accompany us out to the property can enjoy all the Los Islotes has to offer in shade and comfort.

Here's our tale of How We Escaped The Frozen North... We came to Belize from Idaho. We were used to...

Retire In Spain: Enjoy A European Lifestyle Without Sacrifices