Life In KL, City Of Contrasts

“I wander through the jungle on narrow paths,” writes Correspondent Wendy Justice, “enjoying the thousand shades of green. Monkeys chatter nearby, making themselves heard over the ever-present hum of a billion insects. 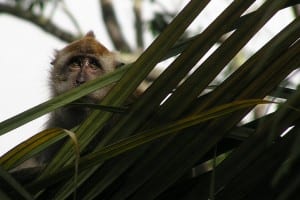 “The trail meanders down the hill, revealing hardwood trees with elaborate roots and rock-hard trunks. As I reach the end, I turn to the right and continue walking. Not 15 minutes later, I step into the air conditioning of the world’s tallest twin towers.

“What other city offers the startling contrasts so common in Kuala Lumpur, Malaysia’s capital? The ultra-modern city center, with dozens of skyscrapers, overlooks Kampung Baru, a traditional Malay village and Kuala Lumpur’s oldest neighborhood, which has somehow managed to survive less than half a mile away.

“Beneath the shadows of the Petronas Towers, the Public Bank skyscraper, and the towering Wisma Celcom, Muslim families raise vegetables, hold open house on their front lawns, and tend to chickens roaming freely on the quiet streets.

“In Kampung Baru, there is little traffic. Villagers make their way home from the Saturday market carrying orange plastic bags filled with produce and whole chickens, children laughing and scampering around them.

“People stop when they see me. Few foreigners ever make it to Kampung Baru.

“Loudspeakers at a nearby mosque broadcast the afternoon prayers, sung so artfully that I pause to listen. A family approaches, the woman wearing her headscarf and traditional two-piece, long-sleeved gown, her husband at her side with his white, woven Muslim cap.

“It is late afternoon, so I know that English is not their primary language. I am an outsider here, yet I am made to feel welcome.

“It takes only a few minutes to leave this little village and return to the 21st century. The stainless steel Petronas Towers, visible from almost everywhere in Kuala Lumpur, 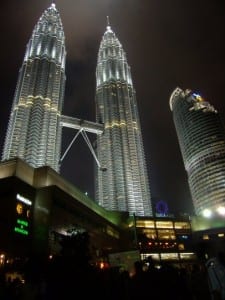 serve as my landmark. They are 88 stories high (8 being a lucky number for the Chinese), connected to each other halfway up by a skybridge. They are beautiful to look at, gleaming during the day, illuminated at night, and startling in their height.

“Back in civilization, I cool down with an ice-cold glass of fresh mango juice before heading on to the Suria KLCC mall, adjacent to the twin towers. Here, I can shop for a Rolex, visit the Gallerie Petronas, with its local art exhibits, or spend a relaxing few hours at Aquaria, watching sharks swim overhead in the walk-through aquarium.

“Less than a mile from KLCC, past a city park and a row of upscale restaurants and discothèques, is the Menara Telecom, 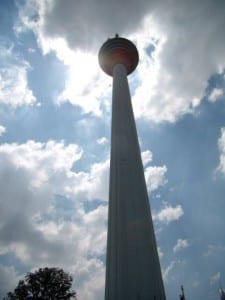 the fourth-tallest telecommunications tower in the world. A landmark for miles around, it is best viewed at night when it lights up in changing colors for a few minutes every hour.

“From the top, the entire city is visible, including the rim of mountains surrounding the urban area and a glimpse of the ocean to the west. Below, I can see rows of brightly painted Chinese shop houses, sprawling parks, high-rise condominiums with rooftop swimming pools, churches, mosques, and Hindu temples. City Forest, which is home to the jungle trails I described above, begins at the base of the tower. 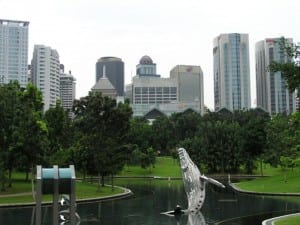 “The people of Kuala Lumpur are as diverse as their city. A mixture of ethnicities is apparent in almost every neighborhood, where Malays, Chinese, and Indians all manage to retain their traditions, languages, and heritage. The binding language, if there is one, is English. You’ll hear it spoken throughout Malaysia and especially in KL.

“One of my favorite neighborhoods, Brickfields, near the sprawling KL Sentral, is delightfully diverse. Within a two-block segment is a Hindu temple, a mosque, two Christian churches of different denominations, and a Buddhist temple. Women in brightly colored Punjabi suits, wearing a dozen bangles on each wrist, work alongside smartly dressed Chinese businessmen and conservatively attired Muslims.

“Foodies are big beneficiaries of all this diversity. Every neighborhood has hawker stalls, usually makeshift kitchens set up on sidewalks or in designated hawker centers. Chefs prepare everything from four-course Indian tandoori feasts to Chinese dim sum lunches, fresh chicken satays, 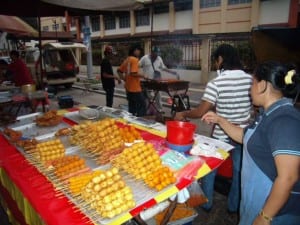 curried Malay laksa soups, and hamburgers. Prices are amazingly affordable at these little eateries, and service always comes with a smile.

“Beyond the hawkers are hundreds of restaurants serving regional and western fare, and many top-end, international-standard places are scattered throughout the city and its suburbs.

“Tonight is Thursday, so I will go to the little pasar malam, or night market, in Brickfields. Again, I stand out, because I am the only foreigner, but no one seems to be aware of our differences but me. A large Tamil woman beckons me to her stall and points out her fresh produce, 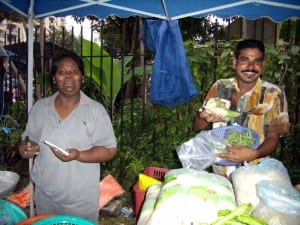 which ranges from sweetcorn to the largest bag of bean sprouts I have ever seen and a large assortment of leafy greens that all taste wonderful, though I have no idea what they are called.

“The prices are ludicrously cheap. I will eat well this week.

“I pass a stall filled with a small mountain of mangoes and buy fresh onions and spinach from the Tamil man with a huge white smile who shakes my hand and invites me to his home for a fish-head curry dinner.

“At the end of the line of food vendors, from the cheerful lady selling what may be the freshest fish in all Malaysia, I buy a kilo of tiger shrimp. Then I head over to the hot food street and pick up some just-fried chicken, coconut rice, peanuts, and green beans, giving the owner the equivalent of US$1.35 for the dinner, then pick up a pint of coconut juice with pulp for about 60 U.S. cents. For dessert, I buy a tub of lightly sweetened soft tofu for 35 U.S. cents.

“My favorite cake vendor waves at me. I tell him I’ll see him next week. I notice another vendor selling flats of fresh strawberries for about US$1.50 each. Too good to pass up, I buy two containers before making my way home.

“Typically, to get around, I take the space-age monorail, which glides above the traffic-clogged streets, connecting most places within the central city area. Starting at the city’s main train terminal, KL Sentral, the monorail passes an ornate Hindu temple before coming within sight of the intricate, Middle Eastern-style domes of the old KL railway station and the national mosque. 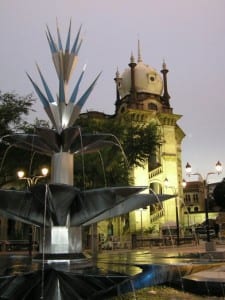 “The monorail stops in Chinatown, identifiable by its freshly renovated Chinese temple, marking the beginning of KL’s extensive Chinese center, with its almost endless shop houses and vendors hawking everything from fake Rolex watches and pirated DVDs to clothing, Chinese teas, herbs, and housewares.

“Beyond Chinatown, the monorail passes the old prison, built a century ago and still functioning, before stopping at Times Square, a gigantic mall with 10 stories of food courts, grocery and clothing stores, and a full-sized, indoor amusement park.

“Beyond Times Square are more malls. Some are labyrinths of tiny, independent shops, others are modern, top-end centers. A little farther, the monorail passes the Menara Telecom on one side, the Petronas Towers on the other.

“Less than 2 minutes from here are the market areas 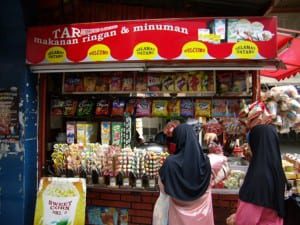 of Medan Tuanku and Chow Kit, before the end of the line, Titiwangsa. From here, a short walk brings you to the huge public park that surrounds Lake Titiwangsa, with its giant Ferris wheel, and the nearby National Art Museum.

“To return, I can choose the monorail, a bus, or the light-rail train, all of which travel from the Titiwangsa station. Taxis are always available, as well, but with such an efficient public transportation system, I rarely use them.

“On the outskirts of KL are the mystical Batu Caves, revered by the local Hindus. Once a year, over a million Malaysian-Indians gather here to celebrate the annual Thaipusam festival. It is an unforgettable experience. Year-round, many people make the climb up the 272 steps to the cave and temple entrance. There are three main caves and a number of smaller ones in the immediate area. 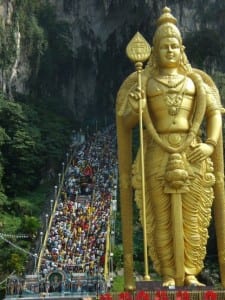 Mountains and jungles lay beyond, offering both cool mountain retreats and frenetic gambling, for those who are so inclined.

“‘Welcome to Malaysia!’ someone calls to me. Almost every day, someone makes a point of it.

“They ask me what I like best about KL.

“I look at them apologetically.

“‘Well, I liked the City Forest a lot,’ I add. Still, they’re puzzled.

“‘OK, then, I love the food!’ Everyone smiles in agreement, a happy sense of camaraderie reasserted.”

Borrowing To Buy Overseas…What You Need To Know

Panama Residency Through An Investment In Reforestation

Panama Residency Through An Investment In Reforestation