Settling Down In Ancient, Historic Dali

by Live And Invest Overseas
in China, Retirement/Living
0

Settling Down In Ancient, Historic Dali

“Vicki and I are traveling through rural China in southwest Yunnan province,” writes intrepid Correspondent Paul Terhorst. “Tibet and the Himalayas are just up the road a ways.

“Immaculate villages with their adobe-brick houses line the river valleys. Below the villages and closer to the river, farmers tend small plots of beans, tobacco, rapeseed, and herbs. 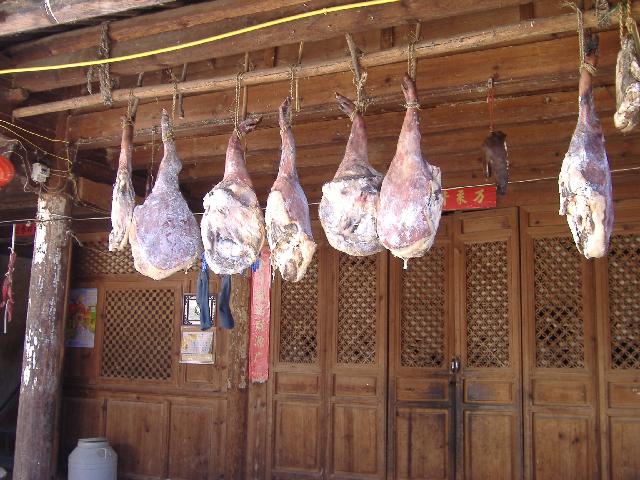 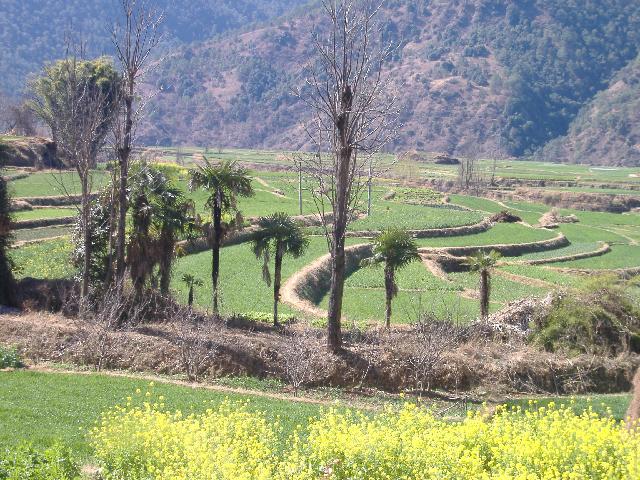 “In one village (see pictures), a family invited us in. Both people and animals lived around a courtyard. The animals, including a yak and pigs, had their rooms, humans had theirs. Feed corn for the animals hung from the ceiling alongside hams for the humans.  Because of proximity, we could smell the animals, and, I suppose, the animals could smell us. Still, like everything and everywhere else in this part of China, the courtyard and rooms were neat and tidy. 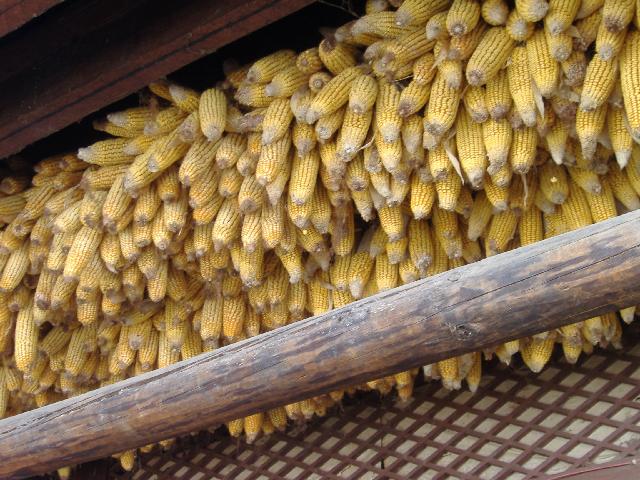 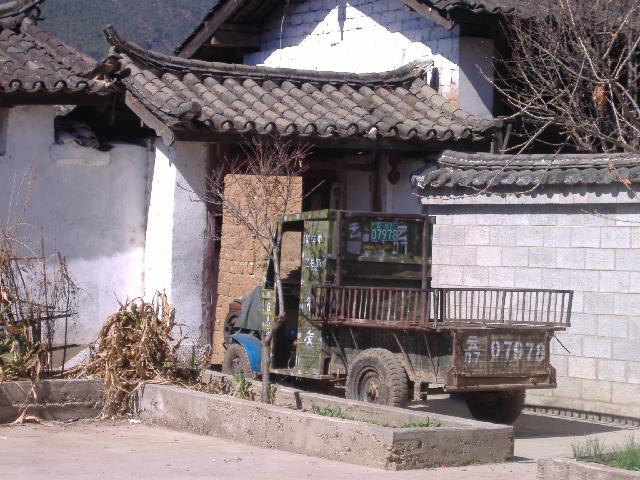 “We visited the town of Shigu at the famous first bend of the Yangtze River–a bend I’d wanted to see for years. Most rivers coming down from the Himalayas flow south. They eventually spill into the ocean in Southeast Asia. The Yangzte does the same, at least for the first thousand kilometers, parallel to the Mekong and just a hundred or so kilometers to the east.

“But then comes Shigu, where the Yangtze abruptly crashes into a wall, turns around, and heads north. The river eventually makes its way farther north and east and flows out at Shanghai rather than Hanoi, say, or Saigon. 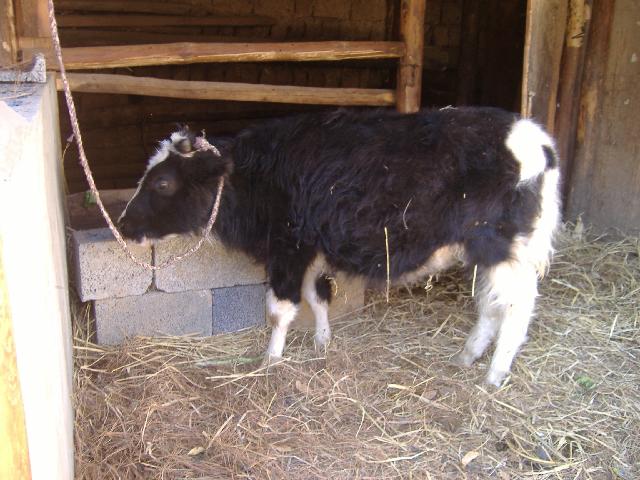 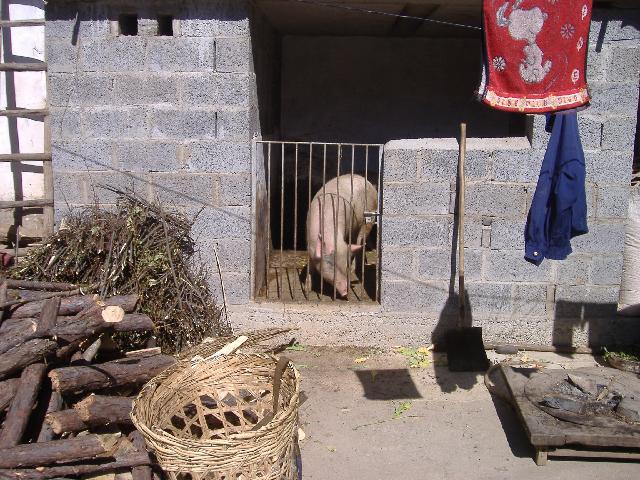 “Chinese history argues that China is the center of the world and the Yangzte the center of China; the river bend at Shigu makes it all happen.

“Another point of fame here: In his 1936 Long March, Mao and his army chose to cross the Yangtze at Shigu. A statue at the bend commemorates the event.

“Our last stop in this part of Yunnan was Dali’s ancient city, a historic jewel that goes back thousands of years. In Marco Polo’s day, Dali became a key trading post on the old Silk Road. During World War II, the Silk Road became the Burma Road, used by the Allies to send arms and other supplies through China’s back door to fight the Japanese. Again, that road went through Dali and ended in Kunming to the east.

“History sort of jumps out at you in Dali’s old streets and alleys (see pictures at terragalleria.com) inside the wall. But, alongside the old temples, monuments, and museums, Dali carries on its day job. There are souvenir shops and Western-style bars, to be sure, but also stores selling building supplies, lamps, underwear and socks, books and DVDs, and dishes and pots and pans. There are barber shops and beauty parlors, pharmacies and supermarkets, many in centuries-old buildings with weeds growing on the roofs.

“Dali restaurants display their most important ingredients–their fresh vegetables–along the sidewalk out in front of their shops. (See pictures.) 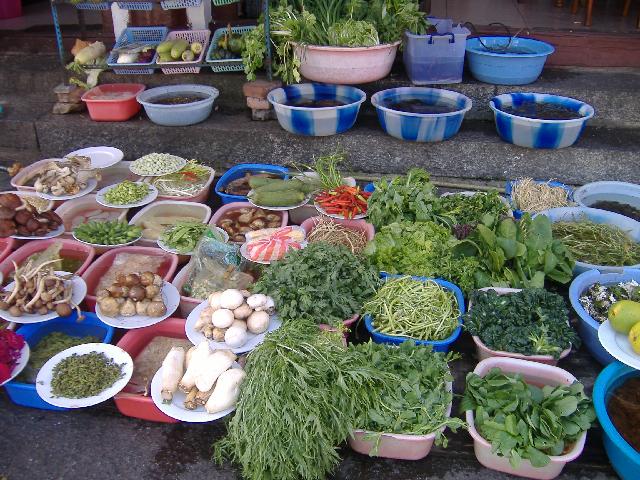 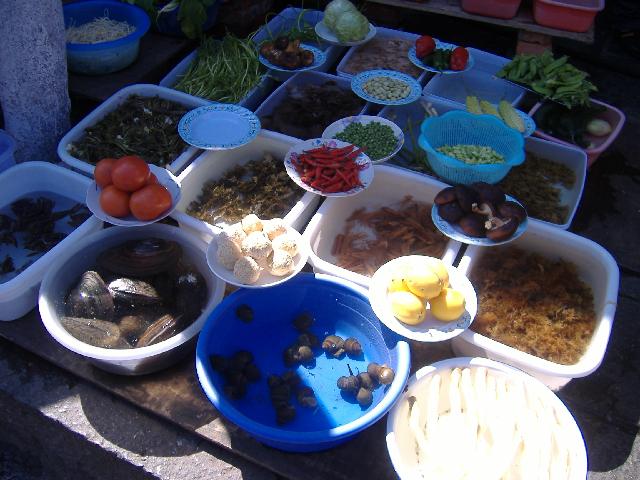 “The Chinese can be assured the veggies are fresh. And we–Vicki’s a vegetarian–can simply point to the vegetables we want. The cook takes them back and cooks them up, without a language problem getting in the way. 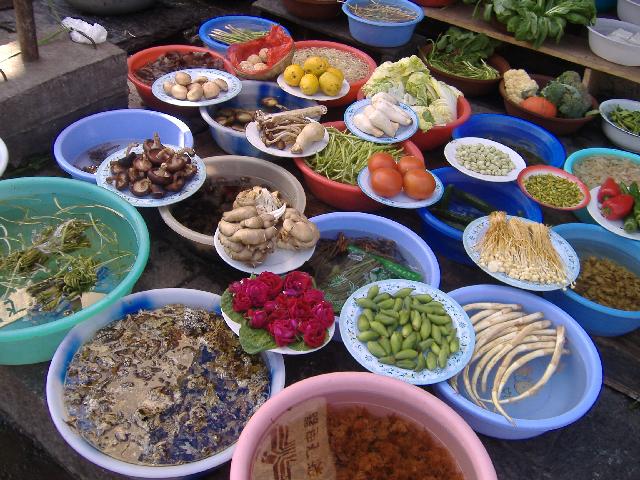 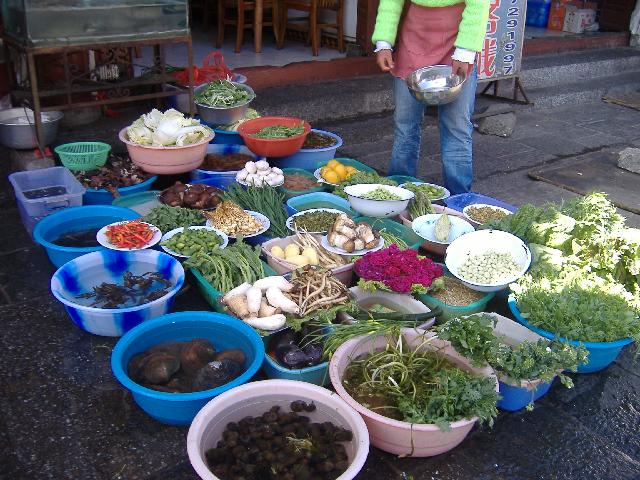 “My Chinese friend David tells me that the Chinese restaurant rule is eat and run. It’s impolite to linger at the table. Take the time to enjoy your food, by all means. But, when you’re finished eating, promptly ask for the bill, pay, and leave. If you want to spend more time at table, go to a bar or teahouse. I like the rule. It makes for fast service, never a wait.

“Dali seems so pleasant that the thought does occur to you: Maybe this wouldn’t be a bad place to settle down…to retire. Perhaps 50 Westerners have already done so, so you wouldn’t be the first.

“This is just like the carnival at the Tuileries that we go to each summer,” Jack, 9, observed after we’d walked along Transismica a little ways.

And at strategic points along the boulevard, young men stood atop tanker trucks filled with water, hosing down the general Carnaval-going population.

If the guys with the fire hoses didn’t get you, the kids with the water guns were sure to. Water, spray string from a can, homemade confetti…everywhere you turned, someone was trying to douse you with something.

Jack’s weapon of choice was a can of spray snow. He learned to restrict his attacks to children his own size. The bigger boys sought greater revenge.

After listening to the music and the fireworks from a distance for four days, we finally ventured over to Transismica, a pedestrians-only zone for the celebration, to see what Carnaval in Panama City is all about. We enjoyed a PG version of the event, I think, arriving mid-afternoon. Children in bathing suits, flip-flops, and tank tops ran up and down the street, soaking up the music, the sunshine, and the almost-anything-goes, nobody’s-going-to-tell-you-to-calm-down atmosphere.