“My friend Ivan and I crossed the border from Ukraine into Suceava, Romania,” writes Intrepid Correspondent Paul Terhorst, continuing his East European adventures.

“We were told to expect hassles at customs. Now that Romania has entered the European Union, the country has become more expensive. Smugglers from Ukraine hide cigarettes and alcohol, hoping to sell for more across the border.

“In the customs area, I was reading a book while waiting–a Harlan Coben mystery, if it matters, and I’m pretty sure it didn’t. When the customs guy got to me, he grabbed my book. He saw it was in English.

“Apparently that was all he needed to know; cigarette smugglers in that part of Romania must read in other languages. Profiling.

“He waved us right through.

“Once in Romania we jumped on a train and headed south to Transylvania. We went through the Carpathian mountains, where it was snowing at the time. Dracula’s snow-covered castle would have been nearby.

“We’ve had perfect weather on the trip. To see a little snow at altitude was delightful, especially since we were watching from a well-heated first-class train.

“We stopped at Transylvania’s main city, Cluj Napoca. We saw a street sign downtown: no horse and buggy allowed. Well, we were in rural Romania. Farmers have to get their goods to market. If that meant pulling a loaded wagon with a horse, that’s what they did. Only the city fathers wanted them off the busiest streets.

“We again saw cultural crosscurrents at play. I’ve written about the fluid borders and even more fluid management of the region. Now we saw it again. For example, the city’s main square sports a statue of Hungarian King Matthias, rather than a Romanian. The fine arts museum had two expos going, both beyond me, but with clear influences from Turkey and the Ottoman Empire.

“We found this part of Romania pleasant, pretty, and pristine. Combine that with a very low cost–I’m pressed to figure out how the smugglers can make a buck–and I figure I’ll return with Vicki sometime soon.

“We continued our journey to Sibiu, a medieval town surrounded by three walls. We slept at a four-room pension within the walls. I like the romance of staying in historic city centers, especially when surrounded by walls or a moat.

“In this case the walls have crumbled, but most of the town looks in great shape. I took a photo for you. 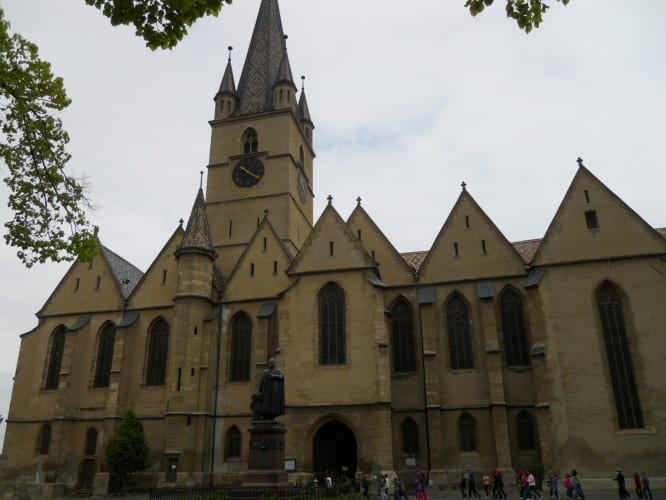 “My friend Ivan, who teaches European history, guesses the most likely reason for the switch was taxes. The ruler of the day, probably a Hungarian king, got tired of sending money to Rome to build St. Peter’s. He decided to keep half the revenue for himself and leave the other half at the parish.”