18 Interesting City Nicknames From Around The World

Find Out The Other Names Your Favorite Cities Are Known By

by Live and Invest Overseas
in Travel
0

Cities and towns have their own personalities, so it’s hardly surprising that many of them have unexpected and creative nicknames. This is part of what makes a place special. Sometimes, city nicknames provide a link to the cities past. Other times, it can seem like an impenetrable mystery.

Below you’ll find some memorable city nicknames from across the world.

Romania’s biggest city is known as either The Little Paris or The Little Paris Of The East. Comparisons between the two started during the late 19th century. Romania had become a unified country and buildings were going up across the city, strongly influenced by the French.

Today, French architecture sits alongside the uniform and uninspired block buildings favored by the Communist Party. However, areas like the riverfront have remained unspoiled.

Check out some guided day-tours in Bucharest.

Florence has many nicknames thanks to its rich history. Examples include Birthplace Of The Renaissance and The Jewel Of Tuscany. The influence Florence has had on modern Western lifestyle is immense.

It’s one of the most beautiful cities in the world, something it’s always taken pride in. Florence is called The City Of Lilies because of its abundance of flowers. These bring another dimension to city life and set Florence apart from other cities.

Here, you can find the headquarters to many of the world’s biggest international organizations… from the World Trade Organization to the Red Cross. It’s also home to more UN staff than any other place in the world.

Switzerland is famous for remaining neutral during conflicts, another reason for it to be known as The Peace Capital. As one of the world’s greenest cities, you can enjoy another type of peace. There’s much less traffic and pollution than in other cities of similar status.

Despite being known as The Lion City, it’s unlikely that lions have ever lived in Singapore. However, it earned this name when an ancient prince spotted a lion while out hunting for deer. Singapura translates to The Lion City.

Singapore is also known as The Garden City, due to plants and trees growing everywhere. Tree-lined streets and lush, tropical plants give the city a vibrant green throughout the year, helped by the abundant rainfall that this part of Thailand receives.

Cairo—The Mother Of The World

Cairo is known by locals as Umm al-Dunya, the mother of the world. Heliopolis, as the city was originally named, was home to Ancient Egyptians. The pyramids, the Great Sphinx, and legendary rulers lived here. Cairo spawned many myths and cultural benefits we still hold in high regard today. The pyramids are visible from nearly everywhere in Cairo, a constant reminder of the city’s glorious past.

Cairo is a sprawling city, and after a tumultuous few years, it’s much safer. Once again, tourists from across the world are visiting to see where it all began.

Milan—The Fashion Capital Of The World

The capital of not just Italian fashion, but world fashion. A cosmopolitan town, Milan is home to Italy’s best art, culture, and restaurants.

But it’s the golden rectangle of Milan’s fashion houses that gives the city its name. The four streets of Via Montenapoleone, Via Alessandro Manzoni, Via della Spiga, and Corso Venezia.

Another city named in honor of Paris, Buenos Aires has plenty in common with the French capital. Argentina is seen as the most European of the South American nations, and nowhere is that more evident than the capital. The people of Buenos Aires identify as being specifically from Buenos Aires more strongly than Argentinean.

Like Paris, Buenos Aires is home to a thriving fashion and culture scene. It boasts Parisian-style architecture, as well as cafés, parks, and museums. Much of this is thanks to French and Belgian architects such as Pierre Benoit and Louis Sortais. These urban planners brought French ideas to Buenos Aires and shaped the Argentinean capital forever.

Prague—The City Of A Hundred Spires

Prague is home to over 1,000 spires, but the city nickname gives a nice idea of what you can expect. A range of different architectural styles make up the skyline. Most of it is from the medieval period, stunningly well-preserved. Influences from Gothic, Renaissance, and Baroque architecture sit alongside modern designs.

Traditional marketplaces still operate and the Astronomical Clock attracts a crowd every hour.

Gaudi is the artist that has most influenced Barcelona. Nearly all the major buildings in the city were designed by this revolutionary artist. One of the easiest city nicknames to figure out.

He started his most famous building, the Sagrada Familia, in 1883 and is still under construction. The plan is to have the building finished by 2026 to mark the 100th anniversary of Gaudi’s death.

Dubrovnik—The Pearl Of The Adriatic

There are many beautiful cities along the Adriatic coast, but Dubrovnik, the most touristic in the area, is worthy of its name. It’s been called “Paradise on Earth” by George Bernard Shaw. Shaw fell in love with Dubrovnik during a visit. He was captivated by the beautiful architecture and blue sea.

It has an interesting history. During the Middle Ages, it was a city state contemporary to Venice. It’s been listed as a UNESCO World Heritage Site since 1979.

Rome’s nickname exact origin date is still debated. Some believe the name was linked to the size of the Roman Empire, which seemed never-ending. The most likely explanation is that it relates to the works of a Latin poet named Albio Tibullo. He wrote, “Romulus erected the walls of the Eternal Urbe.” This is the first recorded mention of Rome as the Eternal City.

Lima has two other names, translating as The Gray and The Pearl Of The Pacific.

The city was founded on the same day the Catholic holiday Three Kings’ Day takes place, thus taking its name.

This name dates back to the 17th century. Paris at that time was a dangerous place… a task force quickly assembled to curb the disorder. They came up with two solutions: The first solution was to increase the number of policeman fourfold. The second solution was to illuminate the city with lanterns and torches. Houses were encouraged to have lighted candles by their windows. This prevented robbers from hiding in dark alleys, making anyone who did commit a crime easier to chase.

The capital’s name comes from an Irish folk song named Molly Malone. The song opens with the line, “In Dublin’s fair city…”

Today, the city is famous for its nightlife, especially the Temple Bar area which is home to lots of lively pubs and restaurants.

Athens—The City Of The Violet Crown

The poet Pindar is credited with giving Athens its moniker. He took inspiration from striking sunsets that glowed violet and bathed the nearby mountains with a purple aura.

Athens was home to Plato, Aristotle, and a culture that shaped the western world. It remains a global city, and the amount of heritage is truly astounding.

Much of Athen’s charm is thanks to its well-preserved history. Despite being a modern city, you can easily lose yourself in the past.

Cape Town—The Tavern Of The Seas

Cape Town was founded as a stop-off point for European ships heading to the Far East. The spice trade was beginning to take off and hundreds of ships were making the dangerous voyage. This was the perfect resting point, helping the city build its success catering to weary sailors in need of refreshment.

Unsurprisingly, alcoholic refreshments were the top priority for most sailors. Taverns and hostels sprang up along the harbor front. A thriving boat repair industry was born. Outside the city, fruit and vegetables were planted and cattle farmers relocated.

Vienna has its name thanks to a famous resident, legendary psychoanalyst Sigmund Freud. Freud came up with his best-known work that changed psychology forever while living here.

Vienna isn’t just known as The City Of Dreams. It’s alternatively called the City Of Music and The Imperial City.

The City Of Music relates to the influence its had on classical music through the years. Mozart, Schubert, and Strauss II were all born in Vienna. To this day, the city has some of the best concert halls you can find. It regularly hosts performances from the biggest names in classical music.

Zurich is the commercial capital of one of the biggest financial cities in the world. Its name comes from being a city’s global powerhouse, without the size and population.

Zurich has a world-class infrastructure system which never gets as crowded. Interestingly, it doesn’t have a business or banking district. You will find offices evenly spread throughout the city. Without a high concentration of workers in a certain district, the whole of Zurich feels quiet and unrushed by big city standards.

We hope you enjoyed this list of the best city nicknames. If there are any that you would like to add to the list, please let us know in the comments below. 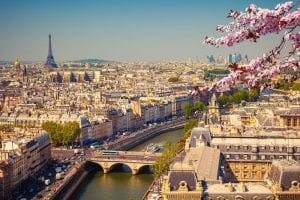 Article Name
18 Interesting City Nicknames From Around The World
Description
Find out the history behind some of the interesting city nicknames across the globe.
Author
Oliver Lovett
Publisher Name
Live and Invest Overseas
Publisher Logo

What We Discovered Opening A Restaurant In Volcan, Panama

How do you measure the ultimate beach experience? I use all of my senses to decide. Let me describe my...

The Top 10 Things To Do In Italy

The Historic Past And Bright Future Of Santo Domingo, DR