The Czech City Of Prague Is Full Of Character And Quirks

Like Paris But With A Wicked Sense Of Humor

From the point of view of an architect or a city planner, comparing Prague to Paris is understandable. In its glory days, Prague, 14th-century capital of the Holy Roman Empire, was of greater and wider repute than the City of Light.

Czechs have spent an inordinate amount of their time, over their history, fighting, including two civil wars, one lasting 200 years. Much of the conflict has had to do with religion.

Then, at the start of the 20th century, as one Czech put it, “This country was offered up to the Nazis.

“Here, have this land, the West seemed to say,” our new Czech friend continued, “with the hope, I guess, that the submission would satisfy Hitler enough that he’d give up on any grander land-grab plans.”

Then, as in Budapest, the Nazis were replaced immediately by the commies. The country’s Velvet Revolution ended 41 years of Stalinist rule in 1989. This recent history is palpable everywhere, not only in city structures and museums, but also in the people themselves.

Czechs today don’t take anything too seriously, including and especially religion or politics. Churches are empty, and the pope has little influence in this once solidly Catholic nation. Attitudes toward things like divorce, single moms, birth control, and abortion are liberal and laissez-faire.

Attitudes toward most everything could be described the same way. We’re tired of fighting, of being told what to do, what to believe, and how to behave… we’ve had enough, modern-day Czechs seem to say. Leave us be, and we’ll leave you be…

Czechs we met during our visit delighted in showing us physical manifestations of their current live-and-let-live manifesto. From the nearly life-sized upside-down dead horse—with good King Wenceslaus as the frustrated rider—that hangs from the ceiling of a center-city shopping arcade (“You can’t make a dead horse run, no matter how hard you try,” our Czech guide explained, “and you can’t make Czech politics run either…”) to the Two Peeing Men statue (the two men so occupied are standing over a map of the Czech Republic) and the statue of Sigmund Freud hanging from the side of a four-story building (“Don’t try to figure it out,” our guide told us. “Freud had no connection to Prague, yet here he is just hanging out in Prague. When the wind blows, he swings back and forth. It doesn’t have to make sense. It’s very Czech…”), this city is delighting, it seems, in taking full advantage of its recently hard-won right to free speech. 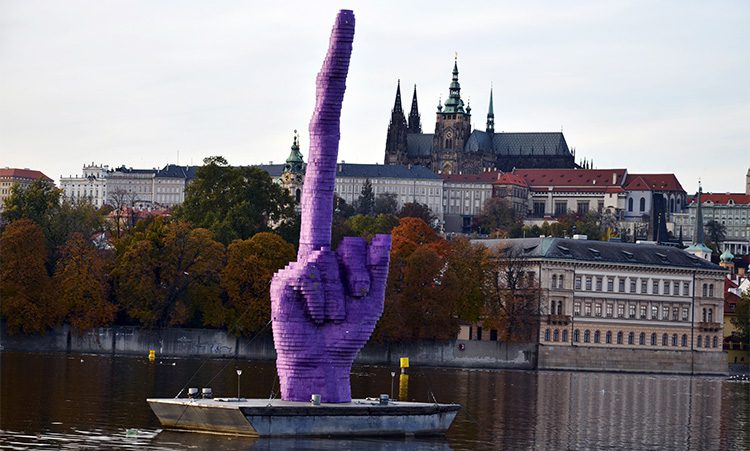 “One activist artist,” one Czech told us, “sculpted a giant pink middle finger that he placed, overnight, in view of the parliament building. He had no permit, so what he did was illegal. Everyone knew this, including the police, of course. But the big middle finger was left in place for three days. That’s how much we Czechs really, really don’t like our current president.

“But, oh, well… this guy will be out soon enough and we’ll have another guy…”

The Czech Republic is struggling, like all former Eastern bloc countries, to get itself back on track. Driving to and from Prague we were delayed and detoured by constant road work. First things first, of course. That is, improving the infrastructure takes priority over rescuing and restoring historic structures, both in Prague and across the country.

On our way from Prague to Krakow, next stop on our do-it-ourselves Grand Tour, we stopped for lunch in the one-time royal city of Hradec Králové. Its big 13th-century, central town square is today a parking lot, the pastel-colored facades of the formerly chic structures surrounding it decaying in real time.

This is the case across this country. Desperate for help to preserve what they can, the Czechs, we’ve been told, are making some properties of character and historical significance available for a crown (that is, a single Czech koruna). We’re investigating further and will let you know what we discover.

From the Czech Republic we’ve arrived today in Poland…