10 Things To Do In Colombia

What To Do Next Time You're In Colombia

by Live and Invest Overseas
in Colombia, Lifestyle, Travel
0

Colombia is a long-term favorite of Live and Invest Overseas. Thanks to the historically strong dollar, there may never be a better time to invest. So if you’re planning a trip to Colombia to see whether it’s for you, here are 10 things you can do while you’re there.

Take In A Coffee Tour

Colombia is the world’s top producer of the Arabica coffee bean. This is the bean used by Starbucks and other coffee franchisees. The sweet taste and lower caffine content has made it a big favorite across the world.

The Colombian Coffee Triangle is a region close to Medellín and a UN World Heritage Site. This is the area where most of Colombia’s coffee is produced. A visit to a coffee farm (in Spanish, finca) up in the Colombian hills is a great way to see the Colombian countryside.

You can find English-speaking guides who will be happy to show you everything that goes into making your morning brew. From growing the seeds, to harvesting, drying, roasting and packaging. You will learn how the different beans are graded and sorted for the various blends. The highlight comes at the end of the tour, when you can enjoy a tasting session.

Many of the tours come with transportation included and prices start from around US$125 for the day. Delamesa run coffee tours from Medellín as well as food tours from Bogotá and Cartagena.

Cartagena is a historic port city on Colombia’s Caribbean coast. The brightly painted Old Town is one of the must-see attractions of the area. Many of the buildings here have been well-preserved from the colonial era. The best way to experience the Old Town is on foot and the area is pedestrianized. Stop off to sample some of the local street food if you feel hungry. Colombians are proud of their arepas and would argue that they are the best in Latin America. Venezuela and Panama would tell you otherwise though…

Cartagena is home to one of the most impressive Spanish forts that you can find in South America. Castillo de San Filipe de Barajas. The fort has protected Cartagena for nearly 400 years. Despite numerous invasions from pirates and other foes, the fort was never taken. Today you can walk around the fort and through the underground tunnels.

El Totumo is a mud volcano around 45 mins from Cartagena. There are posters advertising day trips everywhere in Cargtagena. It’s a popular day out for tourists and day trippers arriving on the cruise ships that call in.

You will need to book a tour with the local company Ruta Ecologica. The price includes a minibus to drive you there and back. Lunch is also provided. Bring some small bills with you to pay for tips. In total you can expect to pay about US$40 all in.

The mud from the volcano is geothermally heated and full of nutrients. Locals call it the fountain of youth. This is an exaggeration but the mud bath exfoliates your skin and the minerals can help with problems like acne.

In 2011 a young street artist was shot and killed by police in Bogotá . This outrage and protests that followed led to street art being made legal. In the years since then, the street art scene has flourished in Bogotá. Bogotá has produced numerous renowned street artists and others from across the world have been attracted to the area.

You can see street art throughout Bogotá, but the highest concentration of work is in La Candelaria neighborhood.

A guided tour is inexpensive and some of the money goes back into the community. The knowledgeable guides can talk you through the history of the area and significance of different paintings. Tours are available in a variety of languages, including English.

Even if you don’t want to pay for the tour just walking around in La Candelaria you will see lots of art works.

Tayrona National Park in Northern Colombia is where you will find the countries best beaches. Think twice about going for a swim though, the currents are legendary and extremely dangerous. There are some beaches set aside for swimming and these are the only places you should think about going in the water.

Most people who visit the park choose to stay for at least a couple of days. Camping as a good and affordable option but there are also hotel rooms available. You might need to book in advance for those though. Food and drink can be purchased at the cafes but you will need to pack your own essentials such as sunblock and insect repellant.

Santa Marta is the nearest city to Tayrona, and there is a regular bus service you can use. There are plenty of taxis too but this is more expensive.

Tayrona involves a lot of hiking, but the jungle scenery and beautiful beaches make it worth the effort.

Take In The View From Metrocable Medellín 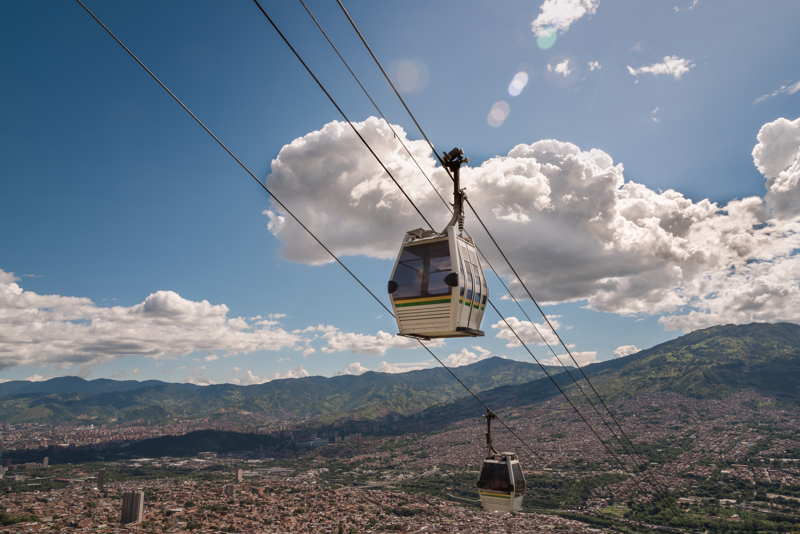 Image Source: iStock/Ernesto TereñesThe Medellín metrocable is a symbol of how Medellín has rejuvenated itself over recent years. The metrocable opened in 2004, about the same time that the city began to shed its dangerous reputation. Although it’s a popular tourist attraction, the Metrocable is primarily a public transport system.

The Metrocable allows citizens who live in the mountains an easy route into the city center. It’s also the best way to see Medellín and the views are spectacular. The Metrocable runs on solar power which is part of a green initiative that Medellín has been promoting.

A tiny island off the North coast, Providencia is a tiny (17km2) Caribbean island that has managed to remain authentic. Most people have never even heard of the island, meaning it’s not overrun with tourists. It’s easy to forget that Providencia is a Colombian territory. You’re as likely to hear English or Creole being spoken as Spanish.

The island has some guest houses and rustic hotels for accommodation. Prices are high by Colombian standards but considering the natural beauty of the island they represent good value for money. There are a few decent restaurants to eat at, if you love seafood then you won’t be disappointed.

If you enjoy dark tourism, then a trip to Hacienda Nápoles, close to Medellín should be on your list. The estate was the countryside retreat of Pablo Escobar, the world’s most notorious drug smuggler.

The estate has plenty of Pablo memorabilia including the first plane he bought, and some of his classic car collection. The biggest attraction though, is Pablo’s zoo. Animals were bought in from across the world and quite a few remain. The most impressive is the hippo lake. The hippos have thrived in Colombia, something that conservationists are very grateful for.

The guided tour comes with breakfast and lunch included. If you want there is the option to go round the park on horseback or take a zip line through the jungle canopy. The guides are very knowledgeable about both Escobar, and Medellín . A highly recommended way to spend half a day.

Caño Cristales translate into English as Crystal Channel. The river is more commonly known as the Rainbow River. From July to September, the crystal clear waters turn red and yellow, attracting tourists and photographers. This unique river coloring is caused by the Macarenia clavigera plant. It thrives in this river, turning huge stretches of the riverbed into a vivid, shimmering haze of red, yellow and orange.

The river is found in La Macarena National Park, which is a great example of the biodiversity you can find in Colombia. As well as Pink River Dolphins, the park is home to more than 500 different species of birds. There is also a variety of butterflies, lizards and frogs. If you get very lucky you might even see a Jaguar or Cougar.

Although anyone can enter the National Park, you will need to go with a guide if you want to visit the Rainbow River. If you want to swim in one of the pools then make sure you don’t put on sunblock or insect repellant. These can damage the river plants and you won’t be allowed to swim if you have applied either.

The top of Monserrate Mountain is more than 10,300 ft above sea level and provides an unparalleled view across Bogotá.

Built in 1640, the church has become an important place of worship and pilgrimage for Catholics across South America. Many of them choose to climb the mountain steps barefoot, or even on their knees. Fortunately, there is also the option of taking a cable car to the top.

As well as the Church, at the top of the mountain there are restaurants and a local market. If you’re struggling with the altitude you can purchase a rejuvenating tea that will help with your symptoms. Remember to pack sunblock, the sun’s rays are very strong at this altitude and with the cooler temperatures, you won’t feel yourself burning.

How To Enjoy A Self-Sufficient Lifestyle In Sunny Belize

It might seem that retiring overseas as a single could present additional challenges… That taking this big leap on your...