by Rebecca Teeters
in In Focus: Panama, Panama
0

Last year was an unusually quiet year for Panama… Neighborhoods were silent with curfews and other pandemic-related restrictions locking down social activities. Even the formerly constant rhythm of dueling radios was silenced.

This year, the streets have started coming back to life… and the volume is finally turning back up. Cars bustle through town, vendors are out on the sidewalks selling their wares, dogs are barking, and, importantly, the empanada man is back.

Every morning in the small town of Puerto Armuelles, you hear the highly inflected calls of these vendors, their voices not only announcing the arrival of the day’s goods for sale but also heralding the return to more normal times.

One of my favorite Panamanian street foods is the empanada. An empanada is basically a hand-held pie made from a corn batter or flour, depending on who you buy from. The dough is stuffed with a variety of ingredients, the most popular fillings being pineapple, chicken, and ground beef.

Once filled, the dough is either baked or fried. In Puerto Armuelles, one baked pineapple empanada will set you back 50 cents, and with a mug of hot coffee, you’ll be set for breakfast.

If you’re in the mood for something more filling, try the man selling tortillas. Panamanian tortillas are not your basic store-bought flour tortillas. They are an entire meal that even the heartiest of breakfast eaters will struggle to finish.

They’re made from ground corn, occasionally with some local cheese is mixed in to the batter. The batter is then grilled, creating a finished product that’s a thick, cornbread-like disc. Make sure to have coffee or milk on hand as this traditional breakfast is very dry. You can purchase a warm tortilla for US$1.

As the day rolls on, so do the vendors. Listen for the slow rolling voice calling out, “Bollo, bollo calientita, bollo.” The man may not make this Panamanian treat sound interesting, but first impressions would be wrong.

Bollo is a simple, healthy snack. To make bollo you grind fresh corn and mix it with a pinch of salt and the juice derived from the grinding process. The hard part is cutting the corn husks properly. It involves slicing the ends of the soft husk enough that the husk opens but not so much that the corn batter spills out.

Once the husk is filled, the top end is folded over, and the entire bundle is tied shut with a thin slice of corn husk. The package is then boiled until the corn is firm. A bag of three bollos sells for US$1.

If you’re looking for a quick bite without the heaviness of corn, listen out for the little red car that announces the arrival of queso blanco. Made from cow’s milk, this white cheese is similar in texture to feta, although it doesn’t have the same sharpness. It has a mild, non-salty flavor.

The cheese is sold in a bag with some milky juice. Don’t give that juice to the dog unless you’re eating the whole bag in one sitting. The juice keeps the cheese soft and moist. Although the cheese is generally considered a snack in Panama, it’s also a wonderful alternative for recipes that call for feta, ricotta, or cottage cheese. 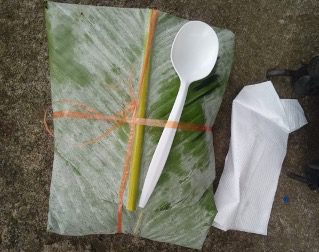 As dinner time rolls around, listen for the lady walking down the street with a large bucket hollering, “Tamales maíz nuevo,” or “Tamales maíz viejo.” Both of these tamales are made in the same fashion, but one uses fresh corn while the other uses dry corn.

Making tamales is an all-day affair for the entire family. If you’re making tamales with fresh corn, your morning starts with picking the corn cobs. About 200 makes 40 tamales. Then the corn has to be shucked and cleaned before the kernels are sliced off the cob.

Once the corn is prepared, it’s time to pull out the grinder, similar to what your grandmother may have used to make sausage. The corn is ground and the juice derived is collected. Both are mixed in a large bowl and a portion of guiso is mixed in.

Guiso means a lot of things to a lot of people, but in Panama it’s a red sauce that surprisingly has no tomatoes in it and is used in tamales. The red color is derived solely from ají, a popular red pepper.

Made by blending together and cooking down a mix of onion, ají, cilantro, and celery with oil and salt, guiso adds color and flavor to the tamales. A dollop of corn batter is dropped in the center of strategically placed banana leaves.

Tamales feature either pork or chicken, pre-cooked before assembly. A piece of meat is placed on top of the corn batter with another spoonful of guiso. The banana leaves are folded like a Christmas present and tied with a string.

Once a batch of tamales are ready, they are then boiled to perfection. One of the best meals you can find in Panama will only set you back between US$1.25 and US$2 depending on where in Panama you purchase them.

Ready-to-eat street food comes in handy on the weekends or at ballgames, where you’re not likely to find hotdog or nachos. Panama tends toward more natural foods…

A favorite dish is ceviche, a snack that can be made with almost any seafood. Shrimp is probably the most popular, but octopus, conch, fish, and even shark are also used.

Ceviche is a term used for “cooking” your seafood with the acidity of lime juice. The seafood is cut into small pieces and mixed with onions. Some add other vegetables, such as peppers and tomatoes, but the primary ingredient is onion. Then fresh-squeezed lime juice is added to complete the dish.

The mixture is generally refrigerated for at least two hours but even overnight works. Ceviche can be purchased for a wide range of prices, but US$1.50 for a small cup is a good estimate depending on where in Panama you’re buying it and what type of seafood is being used.

Saos is another popular street food found at ballgames and bars. It may be a bit of a cultural surprise for North Americans unfamiliar with pigs’ feet… Basically, saos is pigs’ feet that have been chopped small and boiled.

The feet are mixed with diced onion, cucumber, and a touch of hot sauce. A splash of the water used to boil the feet is then added to make the saos a juicy affair that generally requires a napkin.

The slight spice makes it companionable with a cold beer. You can buy an 8-ounce cup for about US$1.50 depending on the size, location, and amount of meat.

The snacks listed here are only an introduction to the many interesting and tasty street foods you can find in Panama. Now that you know what these dishes are and the ingredients involved, don’t be shy about trying them.

If you don’t like something, consider it a lesson learned and a donation to the vendor that most likely spent all of yesterday in the kitchen. You might even be surprised and find something that you’ll crave every day until you have the chance to buy it again, such as a warm pork tamale.

Expat Theresa Rall On Her Life In Quito, Ecuador

Rebecca Teeters is a freelance writer who spent many years in New Orleans, Louisiana, before catching the travel bug. After four years in Nicaragua and a solo drive through Central America, she has finally put down roots in the small beach town of Puerto Armuelles, Panama, where she enjoys learning about the local culture and blogging about those lessons.

Traveling has always enriched my life. Studying different countries in books and travel articles can be eye-opening... But nothing compares...