How To Ride Panama's Historic Train And Also Visit A Beach

by Joey Bonura
in In Focus: Panama
0

The Panama Canal Railway opened in 1855 and was the world’s first transcontinental railroad, creating an easy way to traverse between the Atlantic and Pacific Oceans. It was also the world’s most expensive railroad per kilometer ever built, costing approximately US$8 million at the time. 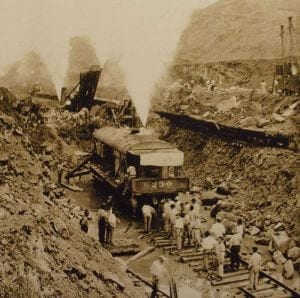 Construction of the railroad took many lives, and it’s estimated that 5,000 to 10,000 people may have died from hazardous working conditions and the spread of malaria and yellow fever. The body count was actually so high that the cadavers were sold to medical schools, and the income was used to maintain company hospitals.

Today, the train mainly functions as a tourist attraction and for cargo transportation. It operates Monday through Friday, leaving Panama City at 7:15 a.m. and then returning from Colón to Panama City at 5 p.m. The cost of the train is US$25 each way, and the tickets are purchased at the train station before you leave.

A ride on the historic Panama Canal Railway has been on my bucket list for a while. It’s one of those things that’s so easy to do at any moment that it always gets left until mañana… Well, I finally did it! 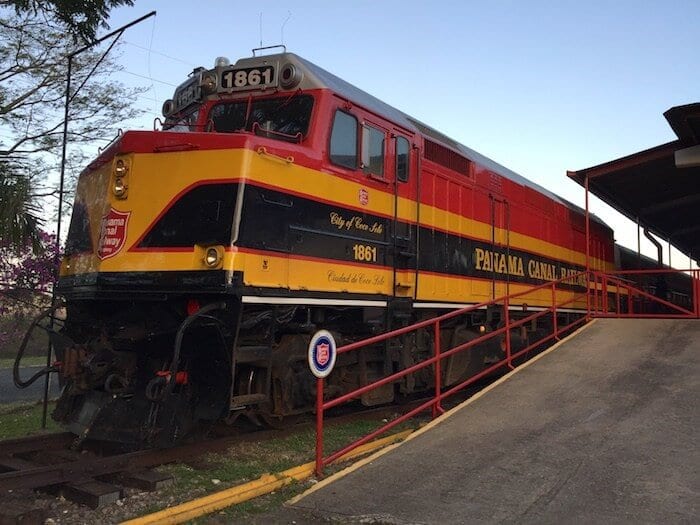 I arrived at the station at 7 a.m. to purchase my ticket. I recommend using Uber to get there reliably (put Panama Canal Railway as the end destination), because I have heard stories of taxi drivers not knowing there is a train station and getting lost. Once at the train station, the credit card machine was not working and I ended up having to pay in cash… so bring backup cash in case that happens.

When we boarded the train, all of the cars were empty except for the tourist car with panoramic windows, which was packed. I wish we had gotten there earlier. My friend and I ended up sharing a table with another passenger from Canada.

It took about 15 minutes to get out of the city, and the environment quickly transitioned into a luscious, overgrown jungle. I imagined what it must have been like to traverse the same route over 150 years ago. 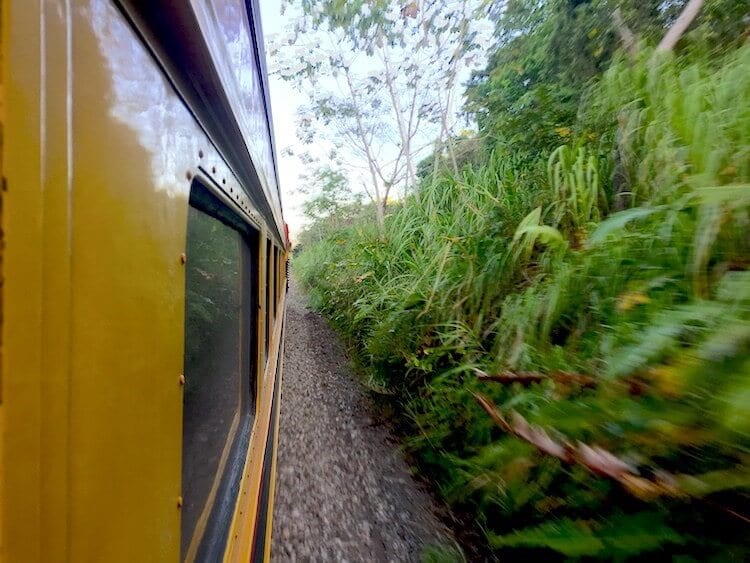 While everyone was taking pictures inside the train, I headed outside for the best view. An open-air space between the cars lets you immerse yourself in the surroundings.

Sometimes there would be a cargo ship to our left in Gatun Lake and then the train would veer inland. It seemed to be cutting its own path through the jungle. The whole experience is enchanting. If you want to grab a seat with no one around, head into the next car for a crowd-free, vintage train car. 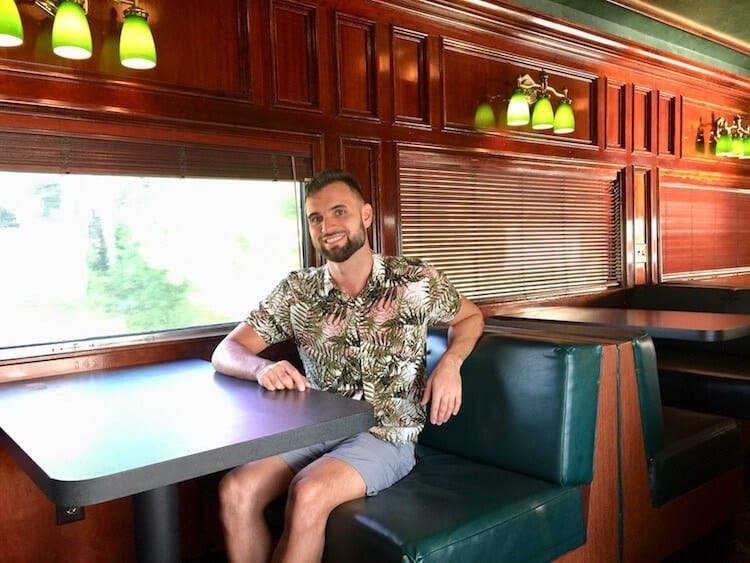 While the train ride is wonderful, where it stops in Colón is not the safest area to walk around in, so you need to make plans to leave the area. You can take a bus back to the city, go on a tour with one of the operators waiting at the station, or head straight for the beaches in Portobelo.

Portobelo is a laidback fishing village in Colón that was once a regional center for trade and the site of several pirate attacks, including one by Captain Morgan. It has some small ruins that are worth seeing, but the Caribbean beaches with clear water and white sand are definitely the highlight.

The walk from the train station to the bus station is six to seven minutes, but it’s a walk to take with caution (walking directions here). Leave your phone in your pocket, and try not to look too touristy. A few people had their giant DSLR cameras out to take pictures, but it’s better not to draw that type of attention to yourself. You can also take a taxi from the train station to the bus station for US$5 if you don’t feel comfortable walking.

At the bus station, we had the option to take either the Costa Arriba or Portobelo bus. These buses are diablo rojo-style (i.e., informal, privately operated transportation options in outfitted ex-school buses) so expect them to be basic but cheap! They cost only US$1.60 per person, and this is paid as you’re getting off. While the bus is cheap, it added quite a bit of travel time to getting to Portobelo…

It finally left at 8:45 a.m., stopped for gas on the way, and arrived in Portobelo at 10:30 a.m. The travel time was 1 hour and 45 minutes, plus the 30 minutes we spent waiting for the bus to arrive, for a ride that should have taken an hour. If you have the budget, I would splurge for a taxi that drops you off directly in Portobelo (approximately US$40 depending on your negotiating skills) so you can be there by 9:30 a.m.

If you just want to head back to Panama City after riding the train, you can take the nice coaster bus from the terminal heading to Panama for US$3.60. 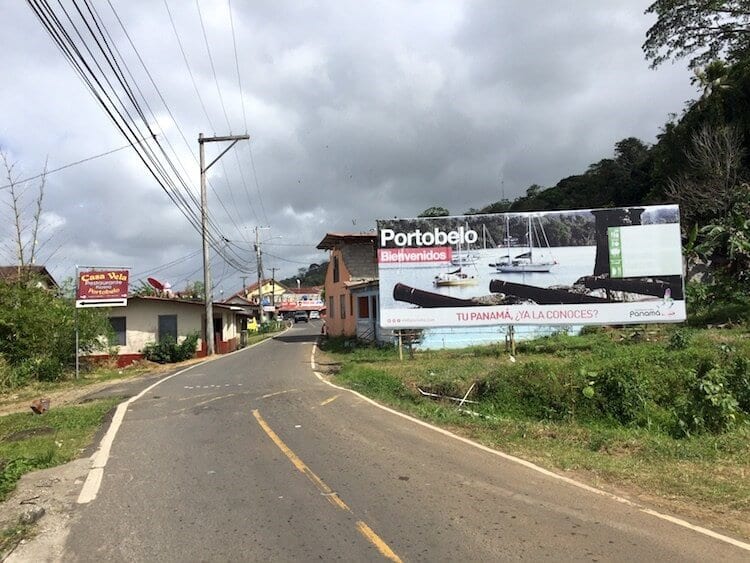 Once in Portobelo, take some time to explore this small town known for its Caribbean Congo culture. The Casa Congo Art Gallery features beautiful local artwork, and the church of the Cristo Negro (famous for its black Christ). The boats that take you to the beaches are located next to the ruins of the Spanish fort, and you have to walk through the old Spanish fort of the original customs house before catching a boat to the beach. 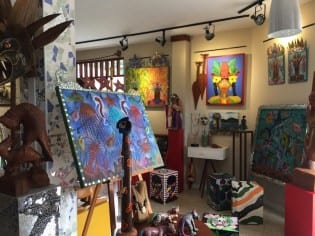 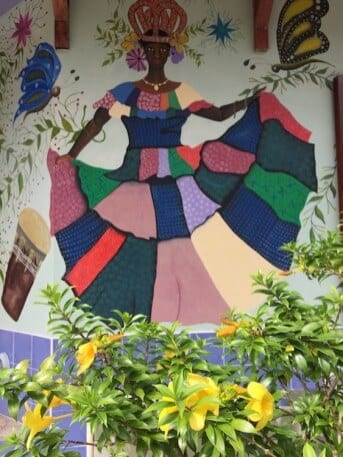 The three main beaches you can visit in Portobelo are Playa Huertas (US$10 per person), Puerta Frances (US$12 per person), and Playa Blanca (US$15 per person). The price can be more or less depending on how many people you have in your group and your negotiating skills. They were originally trying to charge US$20 per person for Playa Huertas as we were just a group of two, but we got them down to US$10.

Playa Huertas had the beautiful Caribbean clear water I was looking for, but the sand was very rocky compared to Playa Blanca, which I had visited previously. It was the most economical option, and the best part was that we had the beach to ourselves (one of the advantages of going on a weekday).

Throughout the entire day, there were only two snorkeling groups that passed by, but they mostly swam out to the deeper water. Be sure to pack your own lunch, snacks, and drinks because you can’t buy anything on the beach. 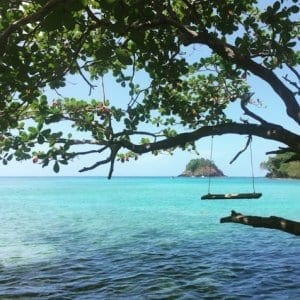 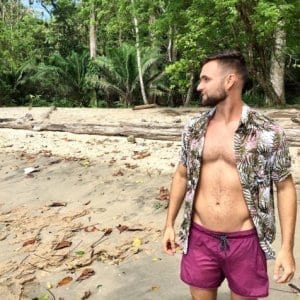 We arranged for the boat to pick us up at 2:30 p.m., and when the time came around, I did not want to leave. A day at the beach was just what I needed to recharge my batteries.

Getting back to Panama City ended up being simple. The Portobelo bus schedule is not set in stone, but locals say it typically goes by every 30 to 40 minutes, with the last one leaving at 6 p.m.

Go to the main road in Portobelo and catch any bus heading for Colón (on the opposite side of the road to where you were dropped). The bus costs US$1.50 (paid as you get off), and you need to get off at the El Rey supermarket in Sabanitas (approximately one hour away). You don’t need to go all the way to the Colón Bus Terminal. Once at the El Rey Supermarket, just use the pedestrian overpass to cross the highway and take any of the buses heading for Panama City.

This bus will cost US$3.60, and they usually collect the payment during the bus ride. The ride lasts one hour and will finish at the Albrook Bus Terminal. From there, you can then take the metro, bus, taxi, or Uber back home.

Overall, this was an amazing experience that reminded me of how much of Panama I still haven’t explored. The historic train ride with the panoramic jungle views is a must-do, and being able to combine it with the beach is a plus. My total cost for the day was US$41.70 (US$25 for the train, US$6.70 in bus fares, and US$10 for the boat). This was a cash-only day, so be sure to bring enough cash to pay for everything because there are no ATMs along the way.

If I were to change anything about the day it would be to take a direct taxi to Portobelo from the train instead of the bus, and to visit Playa Blanca or Puerto Frances instead of Playa Huertas. I would still take the two buses back to Panama City at the end.

Doing this type of tourism on your own is for the adventurous traveler that speaks at least a little Spanish, so I don’t recommend it for everyone. If you don’t feel comfortable doing this on your own, tours can take care of the logistics for you.

Joey Bonura
For In Focus: Panama

Joey Bonura, who hails from Louisville, Kentucky, moved to Panama in 2011 to finish a degree in International Business. He enjoyed the hot, tropical weather and the lifestyle offered in Panama City so much that he decided to make it his permanent residence. Be sure to follow Joey at his website, pty.life, on Twitter, and on Instagram for more updates on this life on the Isthmus.