El Pilar is nestled snugly in the westernmost reaches of Belize… Here, the ancient secrets of the mysterious Maya Jungle are being gleaned.

Lost knowledge and understanding of the once mighty Maya civilization is being unearthed, relearned by indigenous peoples and modern communities around the world… with this comes new appreciation for the incredible impact these lost arts could have on modern society.

Just 12 miles northeast of San Ignacio, 7 miles north of the village of Bullet Tree Falls, and only 5 miles from Carmelita Gardens, lie the ruins of a once mighty forest city.

It’s now reclaimed and hidden by the vegetation the city once protected… This 5,000-acre forest is now called the El Pilar Archaeological Reserve for Maya Flora and Fauna.

El Pilar straddles the Belize-Guatemala border and, to protect it better, there are ongoing talks about a collaborative park between these two nations with a somewhat fraught history.

With breathtaking views of the Mopan river valley, El Pilar was the primary administration center for the area during the Maya Classical Period, and it’s one of the largest archaeological sites from that era.

Only a tiny fraction of the city has been excavated by archaeologists but, thanks to modern geo-mapping technologies, we can now examine the city without ever disturbing the forest above it. Several years ago, LIDAR (Light Detection and Ranging), a ground-penetrating radar, surveyed the site and revealed how significant the city was.

The city itself encompasses 125 acres consisting of 25 plazas, 12 pyramids, many elite household compounds, and corbel vaults, the engineering precursor to the stone arch the Maya never developed.

In past decades the site was under threat from agriculture, looters, and illegal deforestation. Looters have done some damage to this national treasure but the forest now guards the ruins, thousands of tons of biosphere standing sentry on top of the city.

Agriculture, on the other hand, has become an important link to the past, thanks to Anabel Ford of the University of California, who has worked with locals to record local knowledge and to educate the next generation on secrets nearly lost to time.

Championed by her and her Mesoamerican Research Center, two and a half decades of research and community trials have changed the way people look at the Maya of old and both ancient and modern farming techniques.

Locals still farm milpas outside the park as their ancestors did 2,000 years ago, not the corn fields of the dictionary but the garden-farms of Maya and Aztecs still employed today by their descendants to grow calabash, maize, and beans.

One of the major questions hanging over the entire Maya Civilization was, how did they manage to feed such a large population when they had no beasts of burden, no wheels, and none of the major domesticated animals other civilizations had?

What Dr. Ford found was that El Pilar actually existed as a forest city… her inhabitants didn’t cut down the jungle to farm and feed themselves like nearly every other high civilization in history did. The ancient Maya changed the very jungle around them to provide all that they needed.

It must have seemed like magic at the time but, with intelligent planning and planting, the Maya evolved the jungle around them and turned it into true paradise using natural selection.

What might seem like a random collection of plants and trees in the Maya jungle was actually a carefully planned selection over many centuries that was left untended for 1,000 years.

Today the jungle is still a bountiful trove of useful trees and plants.

Built over 1,800 years from around 800 B.C. to roughly 1000 A.D., El Pilar has enabled Anabel Ford to study the resource conservation techniques of the ancient Maya in the jungle and undertake one of the deepest investigations of the Maya in Belize ever.

Ford’s main focus of study was on how the Maya built their homes and fed the large population when they had no beasts of burden, only stone tools, and had few domesticated animals.

With all these supposed agricultural deficiencies, the Maya still had to feed an exploding population, so they took a different direction to the fledgling civilizations in the Fertile Crescent in the Old World and started modifying the jungle around them to support their cities—a symbiotic relationship between forest and humankind.

Forest gardens are integrated food forest systems based on perennial trees and plants with the forest gardeners being their custodians throughout the generations.

Dr. Ford’s research proved that similar plant profiles can be found across the entire region.

In fact, 50% to 70% of major plants in the Maya jungle are essentially the same, a shocking fact to many botanists who know that, in nature, such repetition is uncommon without outside influence. 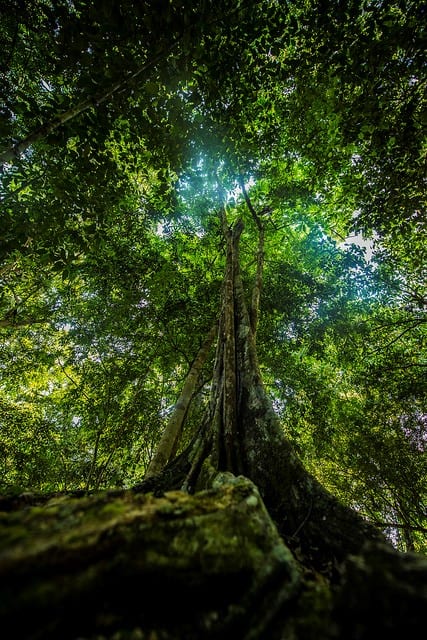 Wonders of the Maya Forest
(Photo: Belize Tourism Board)The only jungle in the world that’s more biodiverse than the Maya Forest, the Amazon, has only 10% consistency over much smaller areas… proving that it was the Maya themselves who selected what would and would not grow in their vast jungles and that the natives were instrumental in evolving the forests to feed and support their civilization.

The other staggering realization was that up to 90% of plants in the Maya Forest are useful to the Maya, providing them directly or indirectly with food, building materials, clothing, medicine, and support trees… and everything else they required to survive.

In other jungles and forests worldwide, there is nothing like this proportion of useful plants or trees.

This bountiful paradise was constructed carefully over millennia; it didn’t occur by accident.

Dr. Ford, in conjunction with the El Pilar park rangers and local bush medicine practitioners, pieced together catalogues of the trees and plants and their uses and husbandry.

With Dr. Ford’s stewardship, the Maya Forest Garden Network was started in Cayo and Maya forest gardening began to be taught in local schools. One of which was a few miles down the road in the village of Santa Familia, returning knowledge and traditions that were fading from living memory to their ancestral stewards.

Serendipitously around this time, less than a mile from the school in Santa Familia, a real estate developer from Florida was having dreams of a sustainable community that would feed and provide for the needs of its members.

For decades Phil Hahn had been struggling with the fallacies of modern residential development as a developer in Florida and was disgusted with the lack of sustainability of the communities he was trying to develop.

On the site of his partner’s old family farm, right on the outskirts of the village and boasting over a mile of riverfront, Carmelita Gardens was conceptualised.

Phil decided to elaborate on some emerging ideas at the time and design a garden community, planting fruit trees and allowing the community members to grow any foods they wanted to.

Common grounds were offered to those who wanted to use them for self-sufficiency purposes and the ethos of the community became “Independent Together.”

All houses were 100% off-grid and self-sustaining with good soil to offer the opportunity for full self-reliance.

Maybe it was a stroke of luck that Phil’s plan for a community just down the road from El Pilar would mimic the ancient format of sustainable forest cities, or maybe there was a little inspiration gifted from the old deities that watched over the forests of Cayo millennia ago…

What can’t be denied is that forest gardening, by everyone, offers a sustainable agricultural alternative… and substantial advantages.

Two of the main advantages of forest gardening:

The soils under tropical jungles and rain forests are often very shallow, so they erode quickly when tilled or plowed. Erosion is a major problem in Central and South America… vast areas of the Amazon have lost their fertile topsoil and are now barren wastelands due to erosion brought on by tilling. Forest gardening doesn’t use plowing and therefore doesn’t destroy the soil.

Annual crops like corn and beans need to be planted every year, are input intensive, and yields quickly diminish as the soil is eroded and depleted unless chemical fertilizers and pesticide use is increased over time. A tree crop is only planted once, can last for centuries, and its yields increase year after year until it is producing more food than an intensively worked annual crop field. This uses no chemical fertilizers, as the fruit trees draw from the other forest trees in true synergy.

Today El Pilar is mostly undisturbed and hidden under the heavy jungle.

Some of the buildings have been excavated but most remain silent and concealed.

Admission to the site costs US$5 and local guides can be organized upon request.

A local guide can show you the collections of flora and fauna that the Maya carefully put in place millennia ago—they are still quietly providing abundance in the jungle for anyone who knows where to look.

Come to Belize and learn how the ancient Maya constructed their jungles… not as wildernesses but as bountiful gardens capable of feeding cities with no plowing, weeding, fertilizing… or real effort… just planning.

Belize is many things... many of them diminutive. It's a tiny country with a small population. Density is low... and...