Cost of Living In Paris Versus Panama City

Paris Cheaper Than Panama? Nah, That Can’t Be Right, Can It?

This week we’re digging into comparisons…

Because no place is perfect, everywhere has its pluses and minuses, and the best way to consider your options for reinventing your life in a new country is one relative to others.

Today let’s talk about two perhaps unlikely opponents… two places where Lief and I have spent a lot of time over the past two-and-a-half decades.

Years ago, when we were preparing for our move from Paris, where we’d been based with our children for four years, to Panama City, where we intended to launch our Live and Invest Overseas business, Lief presented me with a budget showing that it would cost slightly more for our family to be in Panama City, Panama, than it had been costing us to live in Paris, France.

I suggested he double-check his math.

My husband, the accountant, assured me his figures were correct, and, indeed, Lief’s projections played out. Our day-to-day costs of living in Panama City the past dozen years we’ve been living there have been a little higher than they were in Paris.

How Could That Be?

Paris is the most beautiful, most romantic city in the world. It’s also a place where your cost of living can be hugely variable and highly controllable.

That is to say, you don’t necessarily need a royal’s budget to be able to enjoy life in the greatest city on Earth.

In Paris, you can live happily car-free, walking nearly anywhere you’d want to go. The butcher, the baker, the grocer, the wine shop, a half-dozen busy cafés, and as many lovely parks and gardens are all less than a 15-minute walk from almost any point in central Paris.

When you want to venture beyond your quartier, the Métro will transport you from restaurant to nightclub, from museum to café for less than US$2 (when you buy your tickets in a carnet of 10).

France boasts perhaps the world’s best infrastructure, and it’s a bargain. Cable TV, internet, and telephone, as well as the Métro, the bus, and the RER train system… all are likely less costly than comparable services where you’re living now.

Our phone plan in Paris costs less than 40 euros per month and allows unlimited calls anytime to anywhere in Europe and to anywhere in the United States… free. That’s hard to beat.

My point is not that you should plan to move to Paris to reduce your cost of living. It is possible, in fact, to do that, but that’s not the typical agenda where Paris is concerned.

My point is that you shouldn’t deny or delay your dreams of la vie française because you’re worried you can’t afford them. We lived in Paris for four years, with two children, and I’m here to tell you that we were able to control our costs within a very reasonable budget.

But enough with all the theory. Let’s get down to brass tacks. How much would it really cost you to live in France right now?

Cost Of Living In France

This first one for a couple living in Paris’ Marais district, one of its most historic and appealing:

And now a second budget for a couple embracing French country life in the medieval town of Carcassonne, where Walt Disney is said to have gotten his inspiration:

First, remember that no matter where in the world you live, housing will likely be your biggest monthly expense. In France, the cost of housing is far greater in Paris than anywhere else in the country.

Buy your own apartment in Paris, and your Paris housing expense is reduced to a monthly syndic (HOA) fee and property taxes, both typically relatively very small amounts.

Second, my Carcassonne budget includes two monthly bus passes. You could live in this town comfortably using its bus system to get around, but, once here, you might decide you’d like to own a car… allowing for regular travel around the French countryside. That’d be a different budget.

Third, utilities are a relative bargain in France. Our monthly utility costs are much lower, overall and on average, when we’re at home in Paris than when we’re hanging out in Panama City.

This has a lot to do with the cost of air conditioning. When we’re in Panama City, we run ours mostly all the time. Our apartment in Paris doesn’t have it. This means that, a couple of months a year, we’re hot. We open the windows to catch the breezes and live with the summer heat until the season changes.

In winter, we have the expense of gas heating, but keeping our little Paris place warm the few months it’s cold outside is a fraction the cost of keeping our Panama City place cool year-round.

Fourth, again, entertainment expense can be a big part of your budget or zero. This is the case anywhere in the world… and, in fact, Paris is one of the best places in the world to live if the entertainment allowance in your budget is on the skinny side. This city is choc-a-block with fun free things to do.

Finally, your cost of living in a place like Paris will be higher at first and decrease over time.

Lief and I continue to find new and more affordable options for everything from a scoop of ice cream to roast chicken, dry cleaning, and a glass of champagne (all items we purchase all the time).

Nothing makes Lief happier than finding a new, cheaper source for something I’m in the regular market to buy. 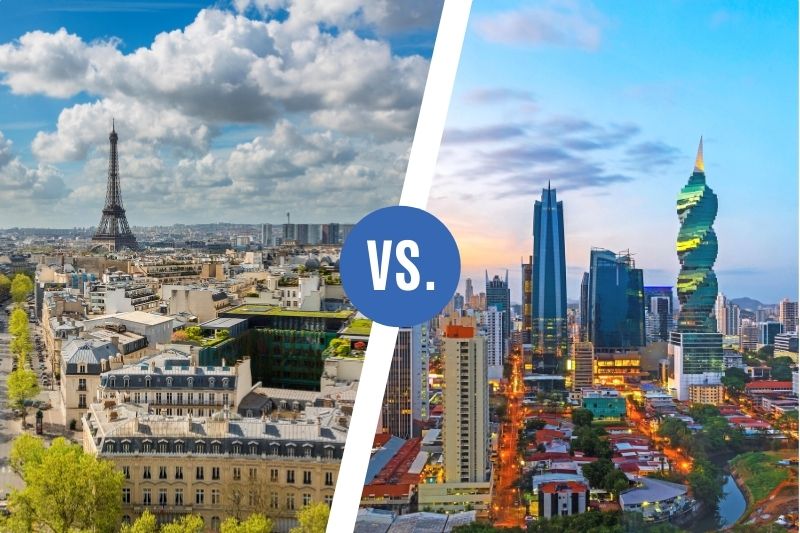 Article Name
Cost of Living In Paris Versus Panama City
Description
Your costs of living in Panama City can be higher than in Paris. How can this be? Let's compare Paris versus Panama City budget edition.
Author
Kathleen Peddicord
Publisher Name
Live and Invest Overseas
Publisher Logo

Cost Of Your Ideal Property In The States Vs. Overseas

A Look At The Different Lifestyles In Belize

Expats Discuss Why They Moved To Medellín, Colombia

"Let me know when you start talking about mild climates and I'll consider it. I have no interest in tropical...

Prices And Lifestyle Are Now Better Than Ever In Medellín

A Look At The Different Lifestyles In Belize