‘Twas the week before Christmas and all ’round the world, we creatures were stirring…

Preparing for the big day, spreading joy and good cheer.

I’d love to say that I’m espousing my adopted homeland’s holiday traditions… but I have to admit that I just don’t have the stamina for it. A typical French Christmas begins at midnight mass on Christmas Eve, which is followed by Christmas dinner. If done right, it could be many courses over several hours, with coffee finally poured around 4 a.m. Once dinner has been dispatched, gifts are opened. Presumably everyone falls asleep around dawn.

The next day is quiet and sleepy, with most in their beds until well past noon. An understated brunch-type meal might come mid-afternoon—possibly the only annual compromise the French make to their normally rigid mealtimes.

A book I recently read by an American who married a Frenchman described her first Christmas with her in-laws. It sounded like a special kind of gastronomic torture to me. She managed to convince her adopted family to accompany her to the movies on Christmas afternoon—a tradition for so many American families—and they grudgingly obliged her. But the French seem to not do much on Christmas Day left to their own inclinations… the presents are opened, the special meal has been had… what’s left?

It seems that what remains is a day to indulge in a grasse matinée, literally a fat morning—the wonderful expression that we seem to have no matching idiom for in American English. Brits would call it “a lie in.” Americans might say they’d sleep in.

Lazing around, the day is given over to rest and relaxation… and perhaps to coddle a gueule de bois, literally a wooden mouth (a hangover).

But there’s plenty more to a French Christmas than just the dinner, and most of it’s just as alien to a North American…

Noël, the French word for Christmas, and comes from “les bonnes nouvelles” or “the good news,” as in the good news of the coming of Christ.

La bûche de Noël, the yule log and the most classic dessert for this time of year, comes from a Celtic-pagan celebration. People would search for a large chunk of tree at the Winter Solstice, which they would burn as a symbol of the re-birth of the sun.

The Catholic Church didn’t eradicate the custom in later years, and a log is still burned in many French homes—particularly in farming communities—from Christmas Eve until New Year in the hope that it will bring good crops and good fortune in the year to come.

Nowadays, though, the log is more commonly represented by the edible Bûche de Noël, which holds center place on French tables during Christmastime dinners. It’s made from a Genoese sponge, covered in chocolate buttercream, and scratched with a fork to make it look like a log. The more adventurous cooks add little trees and Christmas figures.

La Galette des Rois is a more recent addition to French Christmases, dating back to the 14th century. It’s a flaky pastry circle that’s filled with almond cream. In times gone by, a dried bean (une fève) was placed inside the cake.

The person who got the fève was king for the day. The fève has been replaced by all sorts of figurines from tiny kings to cartoon figures.

On Christmas Eve, instead of stockings French kids leave their shoes by the fireplace for Père Noël to fill with gifts and sweets.

What else do we get up to at Christmastime on this side of the pond…? 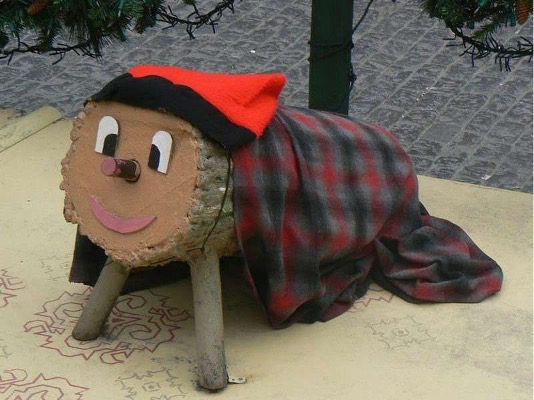 Caga Tió, which translates to “pooping log,” appear by the fireplace Dec. 8, the Feast of the Immaculate Conception. Caga Tió has a perky face and a little red hat, a barretina, set at a jaunty angle. He is fed, watered, and covered at night. On Christmas Eve he is whacked like a piñata while the family sings…

Whacking a log with a stick to make it poop?

It doesn’t sound like something you’d do to celebrate Christmas, but it’s Catalan tradition…

On Christmas Eve, families gather ‘round their Tió, and, to begin, gently tap him with a stick as they sing:

Christmas Log, Christmas Log. Don’t poop sardines,
They are too salty.
Poop turrons (nougat)! They are much better.

The pace and force of hitting pick up, with a final blow from the youngest member of the family to persuade Tió to poop some candy underneath his blanket, which of course he does, usually turron, a nougat-like confection.

The theme is carried through with another special little chap in the Catalan Christmas scene: the caganer, or pooping man. Barretina on his head and back turned to the nativity scene, he’s pulling down his trousers to bare his bottom to one and all (and, yes, he comes with a tiny plastic offering). A regular in every Catalan nativity scene.

Even as the Messiah is born, the Catalans believe that nothing should distract man from giving back nourishment to the land on which we depend. 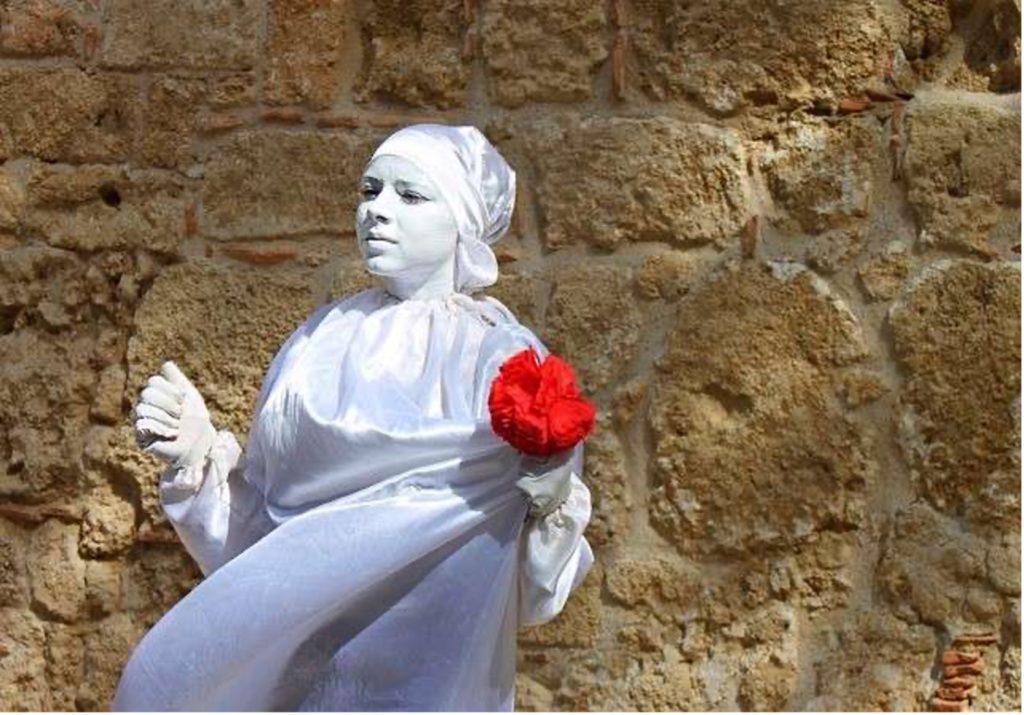 Christmas in London features live pantomime shows, called panto. The tradition goes back to the Restoration after Cromwell’s Commonwealth was ended by the resumed monarchy. During the Puritan period, Christmas was banned as a “pagan” holiday, and all the fun ended. With the Restoration, theater was allowed again, and one of the things they invented was pantomime for children.

Panto has many conventions. First, the hero, in a Shakespearean reversal of roles, is usually played by a young actress, along with the hero’s love interest. Then there is the Dame, an older woman played by a man in drag. In drag, too, are the Good Fairy and the Wicked Witch, who may be part of the story.

There is a chorus, which changes costume often, and sometimes children who dance. Sometimes famous actors and actresses take part. Usually a great mess is made either by cooking or baking something on stage. The audience is engaged in a silly dialogue full of double entendres that the adults hope go over the children’s heads.

Panto is becoming more modern these days, with themes now including Chanukah, Bollywood, and TV shows. 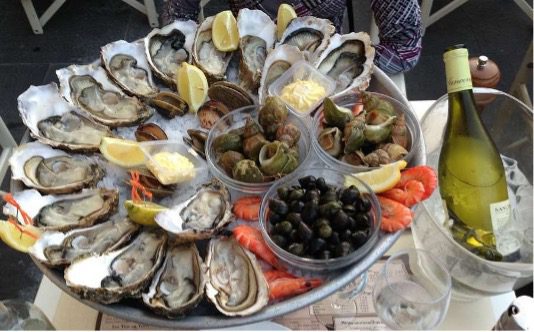 Christmas Eve and Christmas Day, Paris is taken over by oysters.

You see pickup trucks filled with them, and, on the street corners, vendors sitting behind tablesful for sale. All Parisians indulge in the treat, many storing them outside on their windowsills.

We may have French king, Henri IV, to thank for oysters in Paris in winter… he loved the things. Every day during the winter oyster season he had three dozen brought to him on a wagon from Brittany.

Henri IV deserves fame for signing the Edict of Nantes, guaranteeing religious freedom. But he’s also famous for his love of life and life of love…

Over the years, many people have put Henri IV’s love life and his love of oysters together. 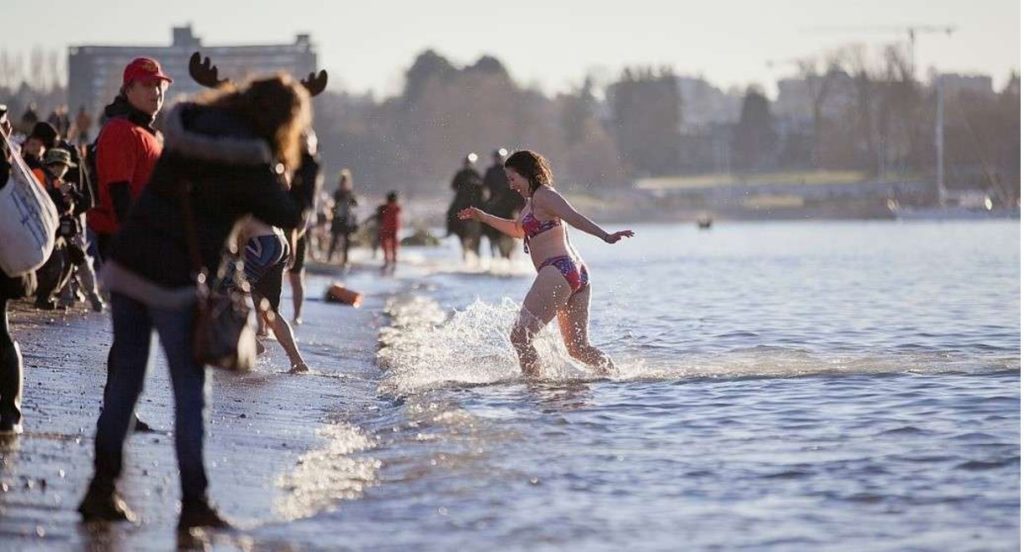 The Christmas season in Ireland begins on the last Friday of November with the broadcast of “The Late Late Toy Show,” running since 1975.

It’s a big family night when children are allowed to stay up past midnight and enjoy some treats by the fire. New pajamas may be bought for the occasion. It’s a chance to see some of the latest toy and book releases… enjoy some musical performances… and, more recently, raise money for children’s charities.

Dating from the 1800s, early celebrants hunted a real wren, killed it, and tied it to a holly branch or pole to parade around town.

From door to door these “wran boys” went, wren on display, begging for money to bury what was then believed to be an evil bird. The funds were used to hold a dance for the whole town.

Today, no birds are harmed in the celebration of The Wran. A fading tradition, wran boys gather in only a handful of places around the country… including in the town of Dingle, County Kerry, for which Dec. 26 is a major date on the social calendar.

Jan. 6, the Feast of the Epiphany around the world, is a welcome date for many Irish women. Nollaig na mBan, or “Women’s Christmas,” is a strong tradition in the southwest counties of Cork and Kerry where women celebrate their annual “day off.”

The tradition dates back to harder times when Irish women reared double-digit families, ran the household without much male input, and helped out on the farm, getting little rest over the holiday season. “Women’s Christmas” was their chance to finally relax, when the men stepped in to absolve them of all household duties… and off they went to the snug of the local pub to enjoy some tea and fruit cake.

Finally, most notably, on Christmas morning, from beaches, piers, and coves around the country, Irish of all ages gather to immerse themselves in the freezing waters off their shores.

“Swim” is a bit of a misnomer. There is no particular distance that you need to cover, nor any agreed-upon duration you must stay in the water. You simply join the crowd of people running toward and then into the water (cheered on by well-bundled spectators), screaming as their bodies hit the ice-cold sea.

A quick splash of the arms and legs, then back in to shore to dry off, wrap up, and enjoy a hot drink or a shot of whiskey.

Wetsuits have appeared on the scene in recent years, mostly among the kids, but it remains an unspoken rule among the hardy adults taking part: traditional bathing suits only.

The seven years I lived in Ireland, I could never bring myself to participate in this pastime, reserved for only the bravest, most thick-skinned among us… but every one of my Irish friends took the annual plunge and I never heard the end of my faintheartedness…

Christmas In Belize: Giving Back To The Community

Cyprus Real Estate: The Hidden Treasure Of The Mediterranean