8 Fun And Interesting Things You Can Do In China

8 Top Things To See And Do In Western China

by Kathleen Peddicord
in China, Travel
0 0
0

What stands out in memory from our three-week adventure along the Silk Road?

Here are my eight most memorable experiences…

#1: The rooftop terrace of the Dunhuang Hotel

After another long, hot, dusty day—this one touring the Mogao Grottoes—followed by another long, dusty drive… we arrived finally at the Silk Road Dunhuang Hotel.

Though we’d asked our guide to book us into the best accommodation available in each of the cities where we planned to stop for the night, we’d learned to keep our expectations in check. This time, we were delightfully surprised to find ourselves welcomed by a grand, high-ceilinged lobby, friendly, competent staff… and signs pointing in the direction of a rooftop restaurant.

We followed the wooden staircase to the open terrace where the hostess made room for the 13 of us then took our orders for appetizers and chilled wine.

We sat in silence a long while, soaking up the view and making a memory of the scene. All around, in every direction, dwarfing sand dunes… like something out of Arabian Nights… or, well, the Kumtag Desert of western China.

Finally, the sun set, and the falling temperatures and our heavy eyelids drove us inside to our rooms.

This terrace is one of the best-kept secrets of today’s Silk Road. 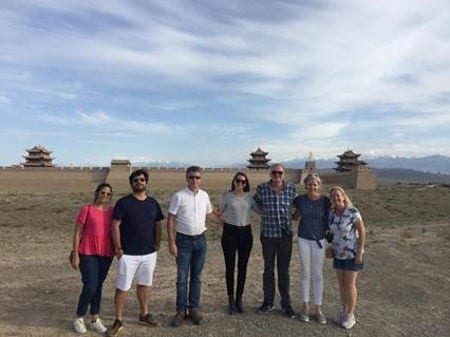 All those Silk Road traders and travelers needed protecting… so China built a wall, in stages, over successive dynasties, to keep away the bad guys. That wall ends at Jiayuguan. From this point onward was beyond the pale, the world outside civilized China, a land of desert demons and barbarians.

Exiled to this back of beyond were criminals, soldiers derelict in their duties, and poets. No one I asked could explain why the poets.

This remains a back-of-beyond no man’s land. We lost cell signal.

In fact, you wouldn’t describe the wall at this point as “great.” It’s just high enough to slow the approach of attackers on horseback.

More impressive is the 14th-century fort built at this critical juncture to guard the narrow pass between the Qilian and Hei Shan mountain ranges. Inside is a temple dedicated to the great warrior general Guan Di, so renowned for his successes in battle that he managed to earn the respect of all Chinese and to unite the country at a time when different religious beliefs were creating great conflicts.

#3: Ruins of the ancient city at Jiaohe 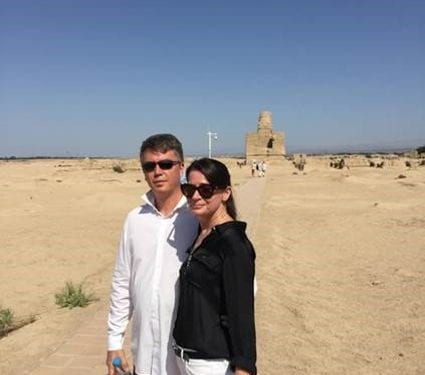 If Disney were to build an

carved out of the earth, Jiaohe is what it’d look like.

But Jiaohe is the real deal, one of the oldest and best-preserved cities in the world. Like many such superlative sights in western China, you can wander it at will, imagining what life might have been like for the 7,000 monks and regular folk who called this Death Valley city home 1,600 years ago.

#4: Riding camelback in the desert 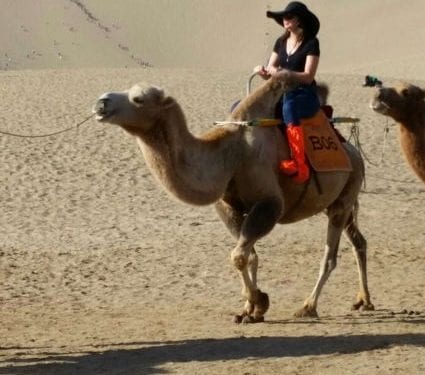 If Disney were to build a desert theme park… Singing Sand Dunes and Crescent Lake outside Dunhuang is what it’d look like.

And, in this case, we are talking about a theme park.

When we approached and realized what lay ahead—turnstiles where our tickets would be scanned then, on the other side, a series of areas offering organized attractions and activities—Lief and I almost opted out.

I’m thankful that some in our group urged us on. Yes, this is tourism central, with tens of thousands of Chinese tourists passing through the day we visited, but the camel ride made it worth the stop.

My camel was tethered with those of three friends, and the four of us were led to the top of the immense sand dunes where we meandered around a while before heading back down to the crowd. I don’t have a lot of camel-riding experience, but this one wasn’t as kitschy as I feared it would be. I’d recommend it.

#5: The mummies at the Xinjiang Museum

When our guide promised mummies, I expected the wrapped-up variety I’ve known elsewhere. But the 3,800-year-old mummies in Urumqi’s Xinjiang Museum weren’t wrapped at all. They were clothed. They had hair, teeth, beards, tattoos, and fingernails. You half-wondered if one might rise before your eyes inside his (or her) glass case.

#6: Children everywhere wanting to speak with us

Almost everywhere we traveled during our two-week Silk Road trek, we were the only non-Chinese in sight. The locals, especially the children, were keen to interact with us and to practice their English-language skills.

One little boy knew only “I’m sorry”… which he repeated to each of us in turn, smiling broadly and bowing all the while.

#7: Arriving in Turpan in time for the grape harvest

Surprisingly, this is also the sweetest spot in China, the capital of this country’s grape-growing and wine industries.

The ground water and fertile soil of the Turpan depression make it an oasis in the desert.

The growing focus is grapevines. Along the highway, along the roadsides, in the medians, in the parks, overhead across pergolas, and latticed in parks, vines are a constant in the Turpan landscape, and this time of year they’re heavy with ripe fruit.

We tried many varieties of the grapes, fresh and dried. Our guide recommended against sampling the wine, though, so we enjoyed the atmosphere created by the vineyards but stuck with French vintages at dinnertime.

#8: Shopping at the fake market with our son Jackson

After two weeks following the Silk Road, Lief and I flew to Shanghai to visit our son Jackson, who is about to commence his sophomore year at NYU Shanghai.

Sunday afternoon, Jackson toured us through the local fake market, where he negotiated purchases for us in Chinese.

Seeing him communicate with Lief and me in English, some of the vendors tried to switch to English themselves. Jackson stuck to his Mandarin.

'Twas two days before Christmas and all 'round the world, we creatures were stirring... Preparing for the big day, spreading...