Facts and Figures from Italy...

Italy: La Dolce Vita Is More Affordable Than You Might Think

Italy is no secret to those of us who love culture, great food and wine, and the beauty of the Old World. This popular European destination is a haven for expats searching for a dreamy, sunshine-filled retirement.

Often nicknamed stivale, or ‘the boot’, due to the country’s uncanny resemblance to a boot, Italy juts out into the Mediterranean Sea, giving it 7,600 km of dazzling coastline. Along with this generous stretch of coastline, Italy offers one of the most varied landscapes on Earth, including scenic mountain ranges like the Alps and the Apennines, and stunning lakes such as Lake Garda and Lake Como.

Home of the Roman Empire, Italy maintains a solid connection to its past, with hundreds of ruins still visible in many cities and towns. The Renaissance can also be felt in modern-day Italy. Cities like Florence preserve the beautiful Renaissance architecture in buildings such as the Duomo Cathedral. Italy’s historical and cultural side offers hours of discovery and enjoyment through art galleries, museums, and city tours.

Italy offers much more than just history, food, and architecture. From skiing in the Alps, to sunbathing on white-sand beaches, to swimming in the bright blue Mediterranean… Italy has it all.

Italy’s abundance of nature makes it a delightful retreat for the active. Aside from mountains and beaches, it offers dense forests to hike and picnic in, medieval towns to explore, and deep valleys patchworked alternately with crops, orchards, groves, and vineyards. Accompanied by a leisurely Mediterranean climate featuring hot, dry summers and cool, wet winters, Italy is the ideal destination for those with an adventurous soul and a love of the outdoors.

Italian food is adored globally, and it’s not hard to understand why. Relocating to Italy means regularly dining on homemade pasta, delicately folded tortellini, fresh cheese, organic produce, and excellent local wine. These quality, locally sourced ingredients, in addition to being delicious, may promote a longer lifespan. Italy is, after all, home to one of the world’s first ‘Blue Zones’: areas where the world’s oldest people live. Scientists believe these longer lifespans are related to the food that is consumed by these populations. 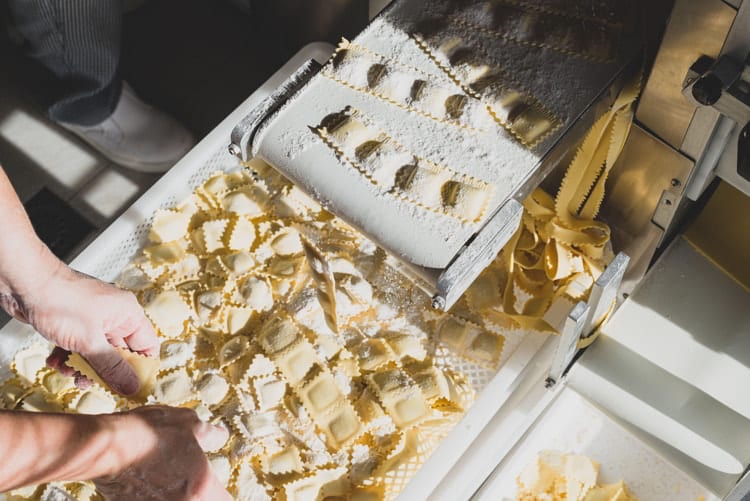 You shouldn’t encounter any difficulty being understood while speaking English in Italy. Tasks like ordering in a restaurant, filling up on gas, or asking for directions are easy to accomplish as employees in the service industry generally have a few words of English. Typically, the younger generation is more fluent in English than the older generations, but getting by is relatively straightforward without speaking Italian. However, Italian is a reasonably easy language to learn, and having a grasp of it would make integration into the local community much easier.

Cost Of Living In Italy

The cost of living in Italy is impressively low, especially compared to the States or Canada. The exact cost depends on where you decide to settle. Bigger cities like Rome, Milan and Venice are the most expensive destinations, with inflated prices due to mass tourism.

Think outside the box, do a little bit of research, and you will find other regions which you may never have heard of before, such as Popoli or Puglia, which can offer a higher quality of life for a much lower price. General daily living costs can be kept to a minimum if you make an effort to buy locally grown fruit and vegetables and stick to the local brands of olive oil, pasta and bread.

In terms of Italian real estate, homes in the countryside can be found at unbelievably low prices; as low as 1 euro! This 1 euro home scheme, aimed at bringing life back into older communities, allows buyers to purchase an older, often abandoned home in a rural village. These houses usually require quite a lot of work to restore, which can cost anywhere from US$20,000 to US$200,000. These 1 euro homes are ideal for anyone wanting to take on a restoration project and make one of these homes their own.

Although Italy has one of themost highly ranked health care systems in the world according to the WHO, it is not uniform across the country. There is a noticeable discrepancy between Italy’s private and public hospitals and a disparity in care available in different regions of the country. Northern Italy is a more affluent area and tends to have better public medical facilities, while the south, which is poorer, has lower quality public medical facilities.

Foreigners with valid visas are entitled to the same public health care access and treatments as Italian citizens. Private medical insurance is mandatory if you are a non-EU citizen applying for residency; once applied, you can enroll in SSN (the national health service). For EU citizens not employed in Italy, national health insurance is available only after five years of legal stay in the country. Read our article on health care in Italy for a more detailed account of how the health system works for foreigners.

Similar to most European destinations, your journey to Italy will require a couple of connecting flights. There are flights daily from New York to Rome, with a flight time of eight and a half hours. At the Leonardo de Vinci airport in the capital, you will find regular flights reaching every corner of ‘the boot’.

There are many options for moving your belongings to Italy.These days there are countless companies ready to assist you with your move. You can choose to have your belongings transported by plane or by boat; however while choosing plane is much faster, it is also significantly more expensive.

Best Places To Live In Italy

Many of us have a preconceived idea of Italy: pizza, pasta, ancient Roman ruins, maybe a gondola cruising through the streets of Venice. However,there is much more to be discovered, and wandering away from popular destinations can be wholly rewarding.

Abruzzo is a region east of Rome that is unknown by many. Off the beaten track, it is not a usual place to spot tourists. With its diverse landscape that boasts majestic mountain ranges, rolling hills, miles of award-winning beaches, dense forests, and medieval towns, some say Abruzzo is Italy’s best-kept secret.

Of course, this is still Italy, rural though this particular region may be. You won’t have any trouble finding ‘high culture’—museums, archaeological sites, galleries, fashion shows, and haute cuisine. Abruzzo offers the ideal balance of lifestyles for retiree paradise.

A surprising amount of people are unfamiliar with Bologna, beyond the food it’s so famous for: spaghetti Bolognese. Domestically, it’s known as ‘La Rossa’ (the red) for its iconic, terracotta-hued skyline, as well as its left-leaning political views. The city is chock-full of history, with one of the biggest, most wellpreserved historical centers. Bologna also has a vibrant music scene—there are opera and orchestra performances year-round… jazz and live music emanating from bars and pubs… open air concerts with diverse music hosted seasonally.

All of these factors combine to create an above-average quality of life for people who live here, both local and expat. If you’ve dreamt of retirement in Italy (and let’s face it, who hasn’t at some point in their lives?) and want to be surrounded by vibrant culture, history, great people, and charming architecture, Bologna deserves your attention.

Relocating to Italy is a decision you won’t regret. This country has everything to offer for an idyllic retirement; scenic landscapes, bustling cities, quaint towns with beautiful architecture, some of the world’s best gastronomy, cheap real-estate and a Mediterranean climate. Move to Italy and embrace la dolce vita.

Cost of Living in Italy

I've been traveling internationally for more than 30 years. I've lived abroad, for half that time, in Japan, the UAE,...

Julie and Peter Thorpe discovered the Italian region of Abruzzo when visiting friends who had settled there. "We had been...

The FIFA World Cup is nearly here. By now your Panini sticker albums should be complete and days off work confirmed. From June 14 until July 15 the eyes of the world will be on Russia, hosts of this year’s competition. The big games and World Cup rivalries are about to begin in earnest. The biggest sporting event in the world, more than 1 billion tuned in for the last final in 2014. Current world champions Germany will defend their...

Retirement In Europe Can’t Be Beat

Is Starting A Business In Italy Key To Expat Success?

The Top Healthiest Places To Live And Retire In 2023