by Live And Invest Overseas
in Colombia, Travel
0

Every December, Medellín, Colombia, is strung with tens of millions of LED lights for its annual Christmas lights festival, named by National Geographic as one of the 10 best in the world. This season, city officials are expecting more than 4 million people to visit my sparkling new hometown.

Our holiday season here in Medellín officially starts today, Dec. 1, with El Alumbrado Navideño, the simultaneous city-wide illumination of the millions of Christmas lights. In preparation, city and utility company employees have been hanging decorations since August, so the entire city will be ready to flip the switch today. The decorations will remain in place until mid-January, which means our holiday celebration lasts a full six weeks.

Where can you find the biggest and best decorations? Each year, Medellín’s power and water company, Empresas Públicas de Medellín (EPM), decorates the Medellín River and major roads in the downtown area with millions of colored lights, displays, and themed presentations. In 2014, EPM reported that they strung 30 million LED lights, draped almost 500 miles of rope lights, wrapped 11 tons of metallic decorative paper, and assembled 170 tons of ironwork to construct the extravagant displays. And, for the first time in 2014, a section of lighting in the Las Palmas area was powered by solar energy, using 100 solar panels, independent of the traditional power grid.

More than 100 other locations also decorate for the season. Smaller barrios decorate their plazas, parks, and churches with different themes each year. Last year we were living in Envigado (a suburb) at the start of the holiday season. Parque Envigado was transformed into a fairyland. The church in the main plaza was adorned with sapphire blue and white stars and a 30-foot tree twinkled with hundreds of multi-colored lights. There were vendors everywhere selling glow sticks, empanadas, buñuelos (similar to huge donut holes), juices, and other treats. Families with small children were walking, laughing, and greeting each other—all in short sleeves or light jackets since the temperature never drops below 60 degrees Fahrenheit in December. 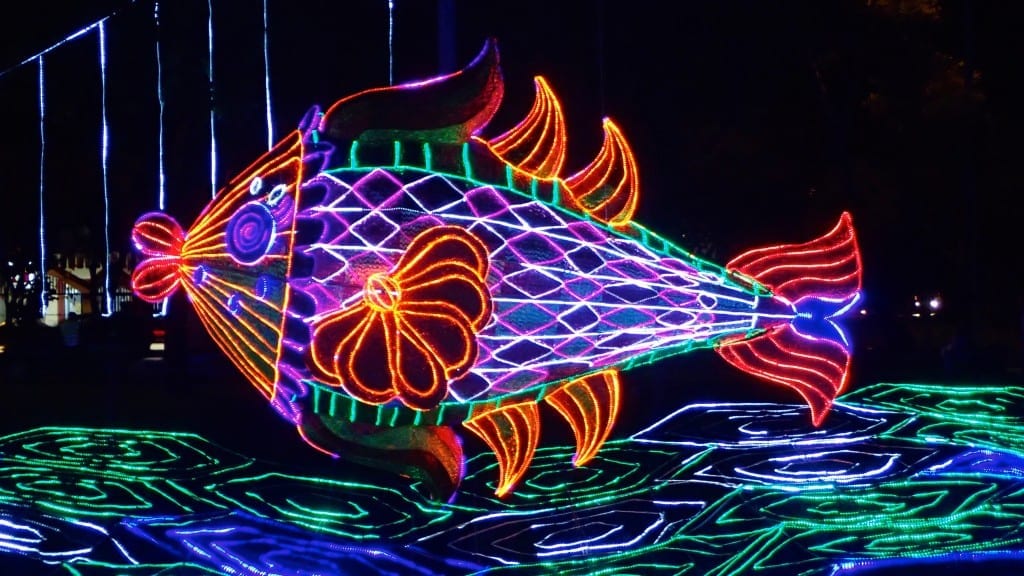 Even tropical fish are illuminated as Christmas decoration

Each street branching out from the park led to a different neighborhood, and each neighborhood decorated in a different color theme. One area was red and gold, a second blue and green, another green and red, or maybe silver and gold. Some of the lights were formed into shapes such as stars, gifts, lanterns, or quarter moons. They flashed and shone in rhythms and patterns that dazzled the eye and slowed traffic.

After we moved to El Poblado, we took a taxi to downtown Medellín to walk along the river and view the most ornate Christmas displays. For more than a mile, the river was netted with lights mimicking the blues and greens of an electric ocean. On “shore” numerous platforms were transformed into different vignettes, each depicting 2014’s theme of personal values that lead to a peaceful world.

The themes of Gratitude, Generosity, Hope, Tranquility, Forgiveness, Tolerance, and Love were the highlights of the festival. These themes were chosen, in part, to encourage the ongoing peace talks between the Colombian government and rebel militia leaders in the far reaches of the jungles.

To see a video I shot of one of the whimsical displays from last year, take a look here.

The downtown displays culminated at a water park where small fountains were illuminated in changing colors, digital videos were projected against buildings and bridges, and children’s games and carnival activities were offered. 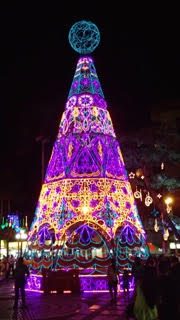 A striking LED tree in the city’s center

To many, the extravagant light festivals around town are reminiscent of Christmas in Las Vegas. Ironically, local stores also sell artificial Christmas trees flocked with fake snow, which we find funny as it has never snowed here and we moved to Medellín specifically to avoid the snow.

Of course, Colombian families cherish the religious aspects of Christmas, as well. For example, on Dec. 7, the Eve of the Immaculate Conception, Colombians celebrate the Day of the Little Candles (Día de Las Velitas). Candles are everywhere—in windows, on balconies and porches, along sidewalks and streets, and in parks and plazas. The candles honor the Virgin Mary and her immaculate conception of Jesus. Then, on Dec. 8, many houses hang white flags with the image of the Virgin Mary outside all day.

Churches in Medellín are packed on Christmas Eve and Day. Many chapels have multiple services throughout the day to accommodate the devout and the not-so-devout who only visit on Christmas. Otherwise, Christmas Day is spent with family and friends. The sidewalks are empty, except for those heading to and from church, and traffic is nonexistent. The city is tranquil.

Christmas is a magical time in Medellín, when more than 3 million residents come together as one big family to celebrate the birth of Christ. Peace, joy, and the true spirit of Christmas abound. 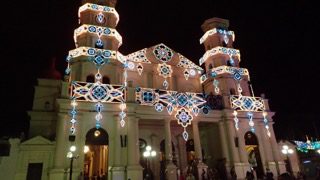 New Ferry Service From The United States To The Yucatan Peninsula

The oldest known sport in the world, played a millennia before the first Greek Olympic Games, is being revived. In...

The Top 10 Things To Do In Italy

The Historic Past And Bright Future Of Santo Domingo, DR

New Ferry Service From The United States To The Yucatan Peninsula