by Kathleen Peddicord
in Belize
0 0
0

Belize is many things… many of them diminutive.

It’s a tiny country with a small population.

Density is low… and I’d describe the approach to living as low-key.

Belize attracts little attention… which, in our world today, is a big plus.

But what’s it really like to call this English-speaking outpost home?

Rachel Jensen has been spending time in Belize for over a decade. She invested in a home of her own on Ambergris Caye, Belize’s most popular expat destination, four years ago.

“Life on this colorful island is laid-back and a little eccentric,” Rachel says.

“The primary mode of transportation on the island is the golf cart, making you feel like the mayor every time you drive through town because everyone waves at you. Seeing 3-foot iguanas on the commute is normal, too.

“There are no chain stores and no Amazon Prime. You may have to visit four different supermarkets to get your shopping done.

“As the store owners get to know you, though, you start to receive special discounts and perks. Plus, you can count on the produce always being fresh and organic.

“Flip-flops and shorts are standard attire, and just offshore you have access to some of the best snorkeling and diving in the world.

“The cherry on top for many, though, is the front-row seat Ambergris affords to the most incredible sunrises and sunsets in the Caribbean…” 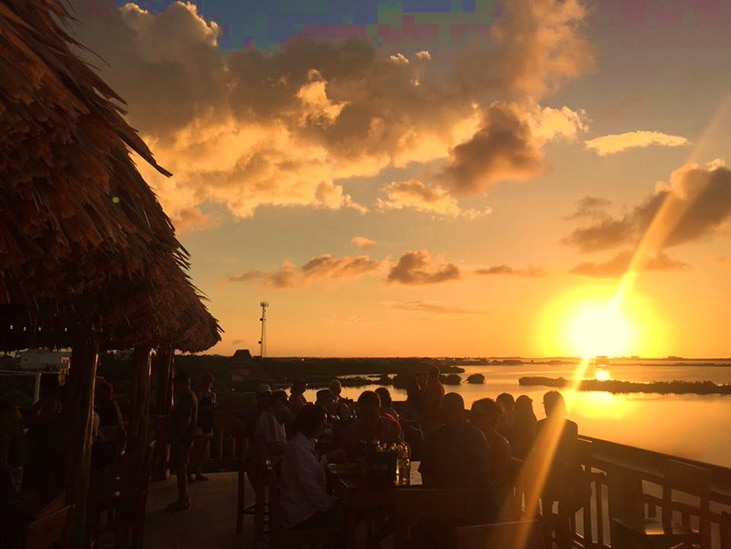 “Lush does not begin to describe these hills,” says longtime resident of Belize’s inland Cayo Carolyn Casey of her adopted home.

“The bottom layer is a green carpet of rain forest bushes and trees. Above this, trees of different kinds stand out. Higher up still are the huge, graceful crowns of palms.

“The three-dimensional landscape is stunning.

“When you turn off the highway toward Springfield, following the sign to All Citrus Nursery, it feels like you’ve traveled 100 years back in time.

“Soon after turning onto the dirt road, you pass a typical Belizean house where you’ll often see women doing laundry in the stream.

“You may see children along the road… the boys dressed like their fathers, the girls with long hair and long cotton dresses, complete with straw hats and dusty bare feet.

“My first regular stop is White Rock Farm, run and owned by a British couple.

“Driving into their yard, you’re instantly surrounded by ducks, geese, chickens, turkeys, and probably some other fowl.

“This is the place to come for fresh, homemade cheeses—blue, brie, and more versions of cheddar than most know exist. They also sell free-range eggs, chickens, and turkeys, as well as raw milk, butter, and other goodies.”

Another popular destination among expats is Corozal. This uber-off-the-radar beach town hugs the northernmost edge of the border Belize shares with Mexico.

That’s one of the biggest advantages of living in Northern Belize—the proximity to Mexico and all its modern conveniences. You won’t find a chain store or franchise in Belize, but if you hop across the border into Chetumal, you’ve got all the exported American culture, shopping, and dining you could want.

John Wiankowski chose this town as his home in Belize.

“Even after six years of living in this beautiful country,” John says, “I still feel like a kid in a candy store. Between the jungle, wildlife, and ever-changing Corozal Bay, I never tire of taking my surroundings in.

“The open-air market brims with fresh fruits and vegetables, all locally grown, plus more foodstuffs brought in from Mexico. For BZ$1 (or 50 U.S. cents), you can get eight local bananas or six oranges. During lobster season I pay just BZ$25 (US$12.50) per pound for lobster tails.

“From just across the border in Mexico, you can get button and portobello mushrooms, strawberries, asparagus, Brussel sprouts, plus much more. Everything is ripe and ready to eat.

“Nature is awesome here. Flowers are such brilliant hues, they’ll shock you the first time you see them. Giant iguanas pass through my backyard daily.

“Originally, I planned to buy a boat and fish in the bay, so I had a boat slip added when my house was built. My priorities changed, so I never got the boat, but now I have a canal that hooks up to the Caribbean Sea.

“I can sit in a sling chair and fish for hours, watching puffy white clouds go by. Two barracudas—one is 18 inches, the other is 5 feet—hang out around my boat slip. I catch several different types of fish and crab when fishing in my canal.

“The weather is warm all year… no more snow shovel for me. The daytime temps are almost always between 80°F and 90°F. Nighttime temps in summer are in the high 70s and can drop into the low 70s in the winter.

“Six years ago, pea-size hail came down. Construction workers ran out and threw the hail around. They played like children. They had never seen hail before.

“It’s easy to make both gringo and Belizean friends in Corozal. Walking down the street, the locals say good morning faster than I can. When a car is stuck or breaks down, Belizeans show up eager to help.

“You might hear about how dangerous it is in Belize. That’s not my reality in Corozal. Most crime that happens takes place in select circles of Belize City. I’ve never felt safer or more at home than I do here.”

I met Carmelita Gardens' founder, Phil Hahn, in 2010. The gregarious Michigan native had moved to Florida for college a...

Is Belize For You?