Is Life In Paris, France Affordable For Retirees?

Can You Really Afford To Enjoy A New Life In Paris?

by Kat Kalashian
in France, In Focus: Europe
0 0
0

Speaking to some of our attendees in Portugal last month, many had questions about the cost of living in my adopted home of Paris.

Paris, they said, is an expensive city—you can’t do anything there without shelling out far more than is sustainable. Is it really feasible to live there full-time?

While I agree that, objectively speaking, Paris is an expensive city, there are so many ways in which living here can be affordable. Here’s how…

Not owning a car, for one thing, reduced our cost of living by about 25%. Public transportation is affordable and far preferable to having a car. A bus or metro ticket is 1.90 euro, and that will get you anywhere in the city.

Plus, I walk most places in the city, as do most people when they can.

If I owned a bike, I’d probably rarely set foot in the metro or buses. At the moment, I’m still using Vélib, the city’s most popular bike sharing service. I pay 3.10 euros a month for access to the bikes. As long as I don’t go over 30 minutes, the ride is free—and you can get most anywhere in Paris by bike in 30 minutes or less. If I take an electric bike or go for longer than 30 minutes, small fees are added to my bill. I haven’t paid more than 6 euros a month in the last year.

Buying locally produced European foods (that were expensive imports before) reduced our grocery budget by at least a couple hundred a month compared to our food bills back in Panama.

Cell phone bills here are a fraction of what they are in the States—we pay about 20 euros a month for each of our phones, with unlimited data, calls, and texts, plus free roaming throughout Europe.

Rent and energy are expensive here, there’s not much to argue there—but these are also controllable. There are some highly affordable neighborhoods in Paris, they’re just not as central. In the 11th, where we first lived, rents and groceries were far less expensive than where we live now, in the 7th. The 12th, 13th, 14th, 18th, 19th, and 20th are all on the less expensive side, and are also where fewer expats live.

And while our energy bills were shocking by the end of our first year in this apartment, we took some measures to use our heating more efficiently this winter and the cost has leveled out to a reasonable number.

Without a doubt, the hardest place to economize in Paris is in the entertainment. We like to eat out, visit museums, take train trips to nearby towns, etc., etc. No point in scrimping on entertainment when that’s why we live here, after all!

So if you want to go out and really enjoy Paris and all it has to offer, can you do it without breaking the bank?

Again, there are ways to control your spending in these areas…

Making The Most Out of Museums

I’m a museum lover, so I’ve become a member of two of my favorite museums that are within walking distance of us, plus a kids’ park that a lot of my mom friends frequent.

For 32 euros a year, I and a guest can visit the Musée d’Orsay whenever we like. A single ticket is 16 euros… so my husband and I break even on the annual fee after a single visit.

For the Musée Rodin, single entry is usually 14 euros, but we’ve paid 40 euros for annual access. This one is especially great because aside from the museum and temporary exhibits, there’s also a wonderful, large sculpture garden. Having access to it is like having our own private park.

These two museums happen to be partners, which means if you’re a member of one you get a discount on the other—look out for these kinds of partnerships, as many of Paris’ top attractions are linked to one another and offer these kinds of deals.

The Jardin d’Acclimatation, an amusement park for families complete with petting zoo, aviary, rides, games, and small water parks, is 35 euros a year or 7 euros for a single entry (but, keep in mind, you’d always be coming with a kid, so it’s always going to be at least 14 euros per visit).

On any given day, we can choose any of these activities “for free” and be satisfied that the amortized cost of the annual pass goes down after each visit.

Plus, there are lots of other benefits, like skipping lines and discounts on the gift shops and cafés, plus first alerts on special events. Tonight, for example, the Musée d’Orsay is hosting a “musical promenade,” with vocalists and instrumentalists playing complementary pieces in front of a selection of the museum’s works. As a member, I was given priority for the reservation, and it’s free.

We’ll take an edifying walk around the museum and have dinner on the way home—or maybe at the museum’s roof-level café for 10% off. Not a shabby way to spend an evening for just the cost of a dinner out.

Or we could visit one of the museums that are free every day of the year:

Otherwise, many museums offer one day a month for free, usually the first Sunday of the month:

These are certainly the busiest days of the month for these places, so you’ll have some competition, but if budgeting is the top priority, you can’t beat free admission.

Thanks to some of the funding for the 2024 Olympics that will be held in Paris, the city launched the Paris Sportives initiative, offering a variety of fitness and sport classes for free throughout the city. From soccer, handball, and basketball to dance, yoga, and boxing, you could find a free sport to do practically anywhere in the city any day of the week.

Paris is rich with beautiful old kiosques, gazebos found in parks and plazas all over the city. Starting in April, the city began putting on free weekend concerts in these beautiful venues; they’ll continue through October. 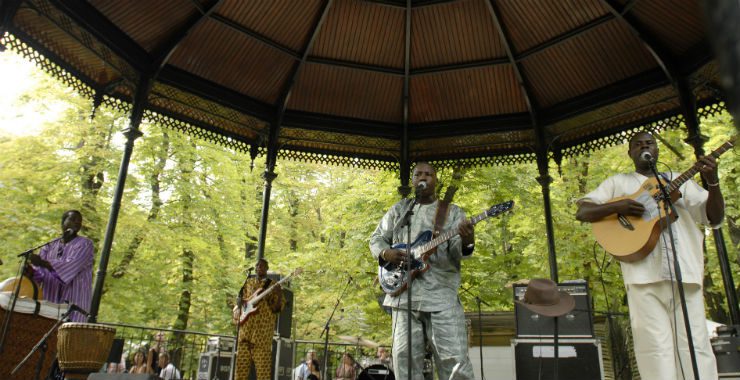 Paris is home to some beautiful parks, all of which are free. As soon as the weather is tolerable, Parisians are out enjoying the green spaces. A gourmet picnic in a park here is one of the most pleasant ways to spend an afternoon, and it costs less than 10 euros—wine included! A baguette is about a euro, some cheese and meats would be about 4, and a drinkable bottle of wine can be had for less than 5.

Eating at home (or at the park) can be very affordable, but eating out is going to run up your budget if you’re not careful. Again, though, you don’t need to forego this indulgence completely… just need to be a little savvy… Eat lunches out instead of dinners, for example—that’s an easy way to keep the cost of eating out at about half of what it could be. Spend time scoping out the cheapest cafés in your neighborhood, paying special attention to the lunch menu and the happy hour deals.

I eat weekly lunch at a café that offers an excellent quality prix-fixe menu—two courses for 13 euros. These prix-fixe lunch menus are only available on weekdays, but they’re designed for businesspeople, so they are affordable and the service is quick when you order them.

Happy hour deals often include not just drinks, but either tapas, planches (a board of breads, cheeses, and/or meats), or other appetizers made to be shared. These can easily be a meal between two people.

We took a family stroll around our neighborhood last Sunday and were in good company with plenty of locals and tourists from all over doing the same thing.

“It’s cool that what’s just an afternoon walk for us is something people travel thousands of miles to do in this city…” my husband commented as we headed home. It makes you feel like you really can’t lose—even a lazy, low-cost day in Paris can feel like you’re appreciating the best of what the world has to offer…

Cyprus: Better Than Your Neighbor’s Retirement To Florida

At the far eastern edge of the Mediterranean, you’ll find an island that has dazzled mankind for millennia… The Greeks...