The Top 3 Towns To Live In Northern Cyprus

by Yaren Fadiloglulari
in Lifestyle, Retirement/Living
0

Northern Cyprus, with its gorgeous beaches, great food, and rich culture, is an underrated retirement destination. Plus, since it’s a former British colony, English is widely spoken.

Here you can experience Mediterranean living at its best—without the price tag of comparable destinations, like the South of France or Spanish Costas.

For most North Americans, Northern Cyprus is still an off-the-radar choice for overseas retirement. Here’s a little help from a local on where prospective expats should live in Northern Cyprus…

Kyrenia is a coastal town that’s quickly developing. If you love the mountains as much as the beach, this is the place to be, as the magnificent Five-Finger Mountains are located here.

Local legend says that these mountains got their shape after two men fell in love with the same girl in Kyrenia. They decided to settle the disagreement with a duel…

As the worse of the two men threw his opponent into a swamp, the better one could do nothing but ask for help by outstretching his hand. When the swamp dried out, the mountains took the shape they have today.

The legend of the Five Finger Mountains is not the only interesting story from Cyprus… My favorite has to do with Saint Hilarion Castle. Also located on Kyrenia Mountains, it’s said to be Walt Disney’s inspiration for Snow White’s castle.

Very close to the castle, there’s Karmi village, with picturesque white houses, pubs, restaurants, and a church right in the canter. Bellapais, another village in Kyrenia, has a beautiful 13th-century abbey right next to Kybele Restaurant, which has amazing views of the city. It’s also where the famous British author Lawrence Durrell wrote his masterpiece, “Bitter Lemons of Cyprus.”

Kyrenia has great restaurants and cafés where you can enjoy the view of the Kyrenia mountains and the sea at the same time. Some of the best ones are Eagle’s Nest Restaurant, Tezgah Café Zeytinlik, and Ezic Peanuts.

The two most popular towns for expats in the Kyrenia area are Alsancak and Esentepe. Both have big expat communities and many facilities around.

In Alsancak, there is a national park with walking and running paths. It’s a great place for a relaxed morning walk. The town also has an amazing vineyard, popular among expats as well as locals for wine tastings and tours.

Winemaking has a long history in Cyprus. It can be traced back to the 1st century when the traditional Cypriot wine commandaria was served at the wedding of King Richard the Lionheart and Berengaria of Navarre.

Esentepe is home to Alagadi Turtle Beach where the endemic caretta carettas and green turtles come to hatch every year. The season for the turtles is between May and October.

A local organization works for the protection of the turtles and organizes public sessions where residents and tourists can see baby turtles hatching from their eggs and taking their first steps towards the sea.

The best golf in the country, Korineum Golf & Beach Resort, is also located in Esentepe. Besides playing golf, visitors can also enjoy nature, have a drink, or grab a bite at the course. 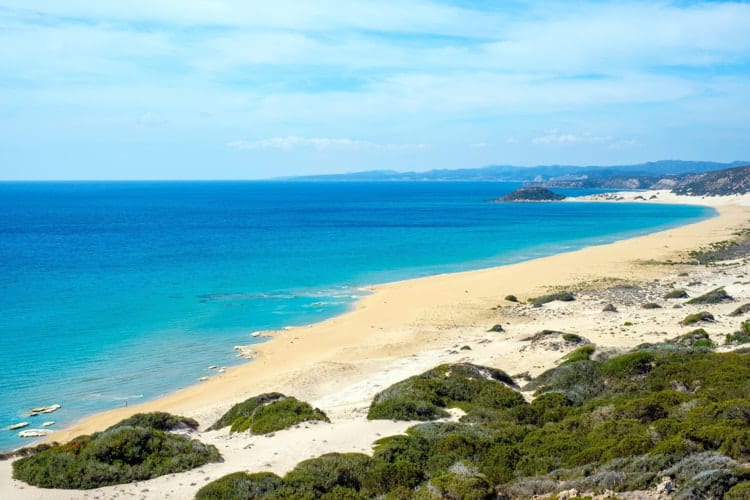 With sandy beaches, local taverns, and many all-inclusive hotels and resorts, Iskele is also popular among expats. This is where my family is from and every time I visit, I am amazed by the developments in the region, including the recently made walking path for Long Beach, the main beach in Iskele. At 1.5 miles long, it’s the longest beach in Northern Cyprus.

Golden Beach, the most beautiful beach on the whole island, is on the Karpaz Peninsula, connected to the Iskele area. It’s one of my happy places, a spot where you can really connect with the nature.

Apostolos Andreas Monastery is on the Karpaz Peninsula as well. According to legend, during a journey to the Holy Land, Saint Andrew’s ship stopped here. He hit the rocks with his staff, and when water sprang out of the land, it healed the captain’s eye, who had been blind for years.

Between the central area of Iskele and Karpaz Peninsula, there is Bogaz, which is a stronghold of seafood restaurants. These are traditional Cypriot taverns where you can have fish and meze (Cypriot tapas) at very affordable prices.

In Bafra, there are hotels and resorts where you can indulge in spas, massages, traditional Turkish hammams, sauna, open buffet restaurants, bars, private pools, and access to beach clubs.

Famagusta is a vibrant town with a lot of history. I like it because it’s a good mix between city life and beach life, as the city center is close to the beach. If you need a balance between both, it’s definitely the place to be.

There are many cafés, restaurants, and bars in the center, such as Exile Coffee and Wine, run by an expat. One of the oldest patisseries in the country, Petek, is also in the city center.

The oldest and arguably the best university in Northern Cyprus, Eastern Mediterranean University, is also located in Famagusta and is close to the city center. This is one of the reasons why the city is as lively as it is.

Also here is Othello Castle, which takes its name from Shakespeare’s “Othello.” Just like Karpaz Peninsula, Famagusta is rich in religious history. Saint Barnabas Monastery is here. It’s dedicated to Barnabas, the patron saint of Cyprus. There is also an iconography museum next to the monastery.

The beaches in Famagusta are gorgeous, with golden sand similar to the beaches in Iskele. In the Maras area, you can find Palm Beach, a relaxed place full of palm trees…

For a livelier atmosphere, there’s Bedi’s Beach, which has been completely renovated by young Cypriots to be turned into a beach bar. During summer, they organize themed music events. Bedi’s Beach is next to the ruins of Salamis, the remains of an ancient Greek city.

The theater of the Salamis Ruins is still used for concerts and cultural events. Salamis has hosted the local symphony orchestra of Northern Cyprus as well as international stars such as Lara Fabian, Julian Marley, The Wailers, and Boney M.

A New Life In Placencia Like You’d Never Imagine

Life In Mazatlán: Brilliant Weather And Sandy Beaches Await You

Yaren is a freelance writer and a travel blogger from Cyprus. Having always been interested in other languages and cultures, she studied foreign languages at university and lived in four different countries. Now, she is going after her life-long dream, to travel and to write at the same time. Besides her own travel stories, she aims to tell many more stories of the complex, multicultural island of Cyprus and to spread the love for the Mediterranean paradise.

Life In Mazatlán: Brilliant Weather And Sandy Beaches Await You