by Robin Post
in In Focus: Panama, Panama, Retirement/Living
0

This is what Frank Stegmeier wakes up to every day.

This is Rio Encantado (Enchanted River), an ecotourism destination on the Caldera River in Chiriquí, Panama.

A Bit Of Frank’s Background…

How did Frank go from former policeman in Washington to owner of 100 acres of prime riverfront property in Boquete, Panama?

In 1972 he purchased a truck and camper and headed for Mexico on a quest to indulge his lifelong love of pre-Columbian art, history, and travel. 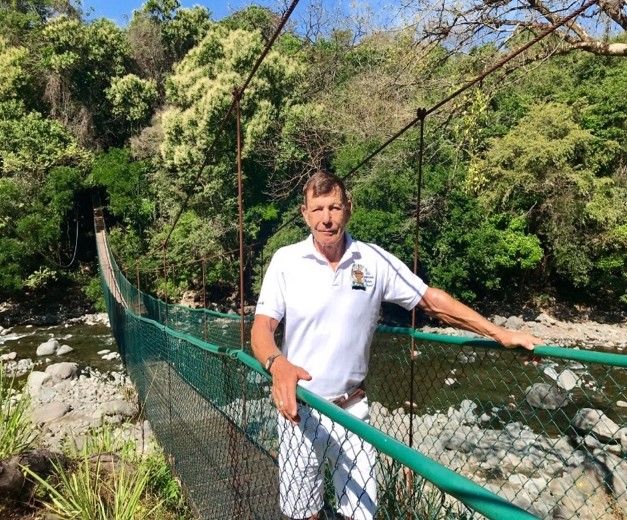 He continued to travel extensively throughout the 70s, collecting art until he had more than he could house, so he opened a gallery. In love with Latin America, he got residency in Costa Rica.

Then, after learning that Panama has better benefits for retirees and a more affordable cost of living, as well as extensive pre-Columbian art, Frank decided to check it out…

Not long after, he built his first home in Boquete in the Chiriquí highlands (for a mere US$8,000).

How Frank Came Upon Rio Encantado

While out swimming at his favorite spot along the Caldera River one day, Frank happened upon a horse and rider and asked the cowboy if he knew of anyone selling land nearby…

This was on a Sunday. By Monday afternoon, Frank was the proud owner of 100 acres of riverfront property, which he came away with for only US$40,000.

As Frank says, “Everyone needs a purpose, a reason to live, a goal… especially as you get older.”

He had found his new purpose.

After selling his properties in the States, Mexico, and Costa Rica, Frank returned to Panama to develop Rio Encantado, his vision for a tourist accommodation and outdoor adventure haven.

Now, several years later, his dream is a reality.

One side of the river is home to a beautifully designed and maintained pool area complete with an open-air bar, cabins, picnic areas, and three rental cottages. The grounds are stunning and boast a plethora of indigenous trees and flowering shrubs.

The opposite side of the river is like stepping into another world: three natural swimming holes, warmed and fed by the nearby Caldera hot springs, well-maintained jungle trails, and, in Frank’s words, “a senior citizen’s zip line.” 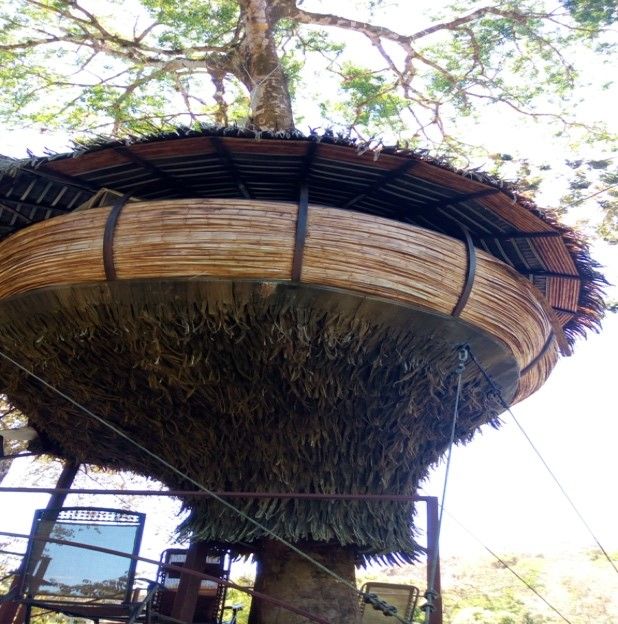 Built around an ancient carob tree, Frank’s treehouse was modeled after a giant termite mound. The dome is crafted from steel rods manufactured nearby and is covered with tiny strips of recycled plastic woven together to mimic thatch (this discourages insects from making their homes there).

Inside, the beautiful craftsmanship for the cupboards, countertops, and more comes from local wood. There is a shower made from river rock. The whole structure is open-air and boasts a view of the river and surrounding area.

As Frank had envisioned it, the treehouse blends in with its jungle surroundings beautifully. The elaborate steel staircase and railing ascend to an open area with a queen bed, bar, sink, and bathroom, with a building below for cooking. It rents for US$150 per night.

Other cabins at Rio Encantado rent for US$80 to US$120 per night. You can also visit on a US$10-a-day pass that allows access to the pool or river and attend a nature tour or do a canopy zip line and Tarzan swing.

Respect For Locals And The Environment

Being a nature lover and environmental advocate, Frank’s top priorities are cleaning up the river, reforestation, and conservation. He is proud of the fact that all the wood and other materials used to develop his property come from the Caldera area.

In addition to the environment, Frank has immense respect and admiration for Panamanian people, several of whom have become loyal long-term staff. He is a firm believer in hiring Panamanians whenever possible and treats his employees like extended family.

“This is their country and foreigners coming here need to integrate with them, not try to change them.” He must be doing something right because everything his staff does on his property is done expertly…

We’re All Works In Progress

Rio Encantado has been, and will undoubtedly continue to be, a work in progress. No hurry, just a new addition whenever things are running smoothly and Frank has another idea… This approach spreads costs out over the years.

“My house, the cottages, the bar, and all other structures were built for less than the going rate largely due to the fact that my talented Panamanian administrator, who has been with me for many years, negotiated with Panamanian contractors and workers.

“So many gringos believe that, because their lawyer or a contractor speaks excellent English, they will be honest and efficient and have their best interests at heart. This is not necessarily true. Unfortunately there’s often a gringo price and a local price.”

That’s part of the reason why he recommends integrating before opening a business. Frank’s team consists of his administrator, who receives a percentage of the profits, a personal assistant (who he pays US$400 per month), two gardeners, a maid, and a part-time cook (who each receive US$20 per day).

“My employee social security costs run about US$400 per month.”

He also hires local laborers for maintenance or small projects. Currently they are constructing a cage for two new additions: rescued Tamarin monkeys aptly named King and Kong. He plans on housing rescued howler monkeys, too.

With his passion for the environment always front of mind, Frank educates people about the importance of protecting this beautiful country. School groups are often invited to Rio Encantado to experience the wonders of nature and how to preserve it.

Frank’s other interests are going out for lunch or dinner with friends, collecting art, working out on his Tarzan swing, and participating in or spearheading environmental organizations, forever striving to teach the municipality, the utility companies, and the government the necessity for these measures.

“But my greatest joy is waking up each morning to the music of the river, the birdsong, swimming, and hiking with my dogs. This place is perfect for lovers of nature and peaceful surroundings.”

If you aren't taking at least some of your profits out of the U.S. stock market and putting it into...