A Tale Of Two Temples—Religious Diversity In Panama City

by Deryl Fisher
in In Focus: Panama, Panama
0

Painted brilliant white and shaped like a gigantic egg, it was hard to miss.

Before Panama City‘s metro was built, the temple was difficult to access. Now, though, you can just hop on the metro to San Isidro Station and make your way to the temple on foot. It sits about a half-mile up a steep road from the metro stop, but a van service is available to take you to the top at no charge.

The temple offers service on Sundays at 10 a.m. Religious leaders take turns reading passages from different holy books (in Spanish). There’s no singing or passing around of a donations collection plate. The service is simple and understated; the whole process lasts about 20 minutes.

After this, congregants depart at their leisure. Some stick around to meditate in the temple’s tranquil surroundings. All around are well-groomed gardens with flowering plants and walking paths. Thanks to the elevated vantage point, the views over the city are stunning.

Followers of the Baha’i faith believe in the oneness of humanity, including equality of the sexes and the idea that humans should develop a common language. They also believe in the creation of a one-world government that leaves no one out, with no second-class citizens on Earth.

According to their beliefs, God designates a messenger for the people of the world. These have included Krishna, Abraham, Moses, Buddha, Jesus, Zoroaster, Muhammad, Bab, and Bahá’u’lláh, with more messengers expected in the future. Each messenger, they say, teaches love and peaceful existence among all people.

Regardless of your religious background or beliefs, the Baha’i Temple is worth a visit. Not only will it settle your curiosity about the unusual egg shape that stands out on the city’s skyline, but a visit will also inspire a peacefulness that can be hard to find in Panama’s capital.

Worldwide, there are between 5 and 7 million people of the Baha’i religion. They practice their faith all over the world but have eight main Houses of Worship. Aside from the one in Panama City, Baha’i Houses of Worship are found in Wilmette, Illinois; Kampala, Uganda; Sydney, Australia; Hofheim-Langenhain, Germany; Tiapapata, Samoa; Delhi, India; and Santiago, Chile.

Every Baha’i temple is unique and artfully designed. These structures are often recipients of international architectural awards. The Baha’i decided to build a temple in Panama City following a prophecy in 1908 that, due to the Panama Canal, Panama would be an important center in the Americas… and they weren’t wrong.

Lovingly referred to as “the egg,” Panama City’s Baha’i Temple was finished and dedicated in 1972. Inside, you’ll find no adornments or statues. In fact, you won’t even find walls. The temple is open to the elements on all nine sides, allowing for the breeze and birds to pass through the structure freely.

This minimalism inspires tranquility and allows the temple’s simplistic beauty to speak for itself. 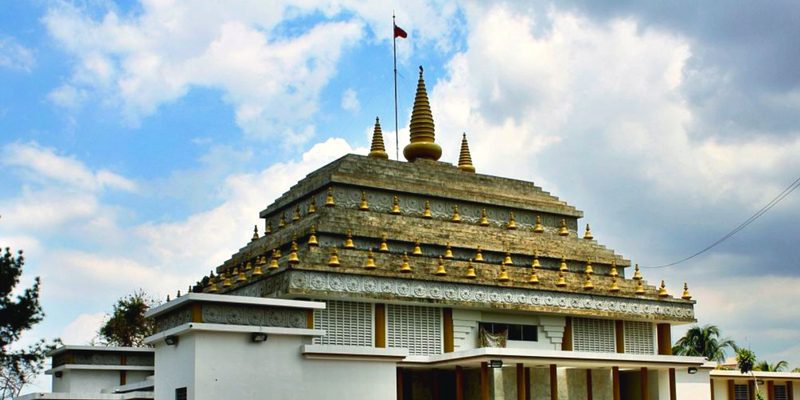 In contrast to the minimalism of the Baha’i Temple is Panama City’s Hindu Temple. This artful structure is painted colorfully and adorned with statues and other representations of a multitude of gods inside.

Outside the temple, a sign indicates prohibitions against shoes, dogs, guns, cell phones, food and drink, and spitting. I asked one of the teenage kids who I saw sitting out front, not seeing any official security people, if I could take pictures with my cell phone. He replied, “You are American—it is OK.” I’m not sure what that meant, but I took some photos.

Bahaism is one of the world’s newest religions, started in 1844 in Iran.

The Hindu religion, on the other hand, is so old it has no known date of inception. Krishna, one of Hinduism’s favorite deities, is said to have been born in 3228 BC. He lived 125 years, 8 months, and 7 days, according to their records.

Panama City’s Hindu Temple is located on Avenida Ricardo J. Alfaro, colloquially referred to as Tumba Muerto (which translates roughly to “tomb of the dead”).

There are some 14,000 people of Hindu faith in Panama. The Hindu Temple, just like the Baha’i one, is a place of peace and tranquility. Being there during prayers is a great way to get a dose of Indian culture in Panama.

This temple is also situated on top of a hill, affording great views of the city. You can access it by climbing stairs through the Universidad Tecnológica and then walking up the hill. Or you can have a taxi drop you at the door, as I did. Visiting hours are 7 a.m. to 7 p.m. daily.

Both the Hindu and Baha’i temples are beautiful, well-loved places of peace and represent just a sampling of the religious diversity that exists in Panama City.

MAILBAG
“Kathleen, why didn’t Costa Rica make your list of best places to retire? It’s consistently been on other best-places-to-retire lists for a number of years. Any special reasons?”

I traveled to Costa Rica for the first time more than 35 years ago and have returned dozens of times since.

Indeed, I was among the first to recommend Costa Rica as a top overseas retirement option… back in the mid-1980s.

What do I think today?

In the early 1980s, somebody in a position of power in Costa Rica had a genius idea that turned out to be the start of an industry. Costa Rica’s tourism agency hired a Madison Avenue ad firm to create a marketing campaign that would, over the decade to follow, position this country as the gold-standard overseas retirement haven.

The powers that were in Costa Rica recognized that American retirees had something they very much wanted a piece of—disposable U.S.-dollar income.

The Mad Men Costa Rica engaged did their thing, and tens of thousands of American retirees and second-home buyers flowed into the Switzerland of Central America (one of the many slogans associated with the effort) in the years to follow… bringing their Social Security, pension, and investment income with them.

Costa Rica was the first country to cop on to this strategy, and it was years before any other picked up on it in anything like as aggressive or as effective a way. As a result, Costa Rica enjoyed a boom in tourism, real estate development, and the numbers of North American expat retirees seeking out its shores.

Even today, ask any American about places to retire abroad, and he’ll likely mention Costa Rica.

It was never a hard sell. Costa Rica is blessed with loads of natural beauty and two coastlines, including one on the Pacific that resembles the best of the southern California coast.

Plus, back when the Mad Men were just getting going, both life and real estate in Costa Rica were cheap. The country’s pensionado program of discounts and tax savings for foreign retirees clinched the deal.

Given the costs, the special benefits, and the beauty of the landscapes all around, retires didn’t mind putting up with San José, which is dirty and crowded and can be unsafe. They were even happy to overlook the country’s broken-down infrastructure. What did it matter if the road was unpaved and rutted? Your dream home at the end of it—with the crashing Pacific just beyond your front door—was a bargain.

That was 40 years ago. Costa Rica today is a different place. San José is as unappealing as ever and less safe. The rest of the country is still beautiful but not altogether safe either. Crime has become a big concern for both travelers and foreign retirees.

Plus, in 1992, after having worked so hard the previous decade to woo American and European retirees, Costa Rica changed its mind. The Costa Ricans didn’t eliminate their pensionado program, but they did eliminate most of the tax breaks it had promised as part of a deficit-reduction austerity package… and they didn’t grandfather existing pensionados.

So all those who’d chosen Costa Rica for the retiree benefits it offered were surprised and disappointed to find that those benefits no longer existed.

Meantime, over those four decades, the cost of everything in this country—from dinners out and groceries to one of those Pacific-front lots—has risen dramatically.

The infrastructure, on the other hand, has continued status quo—that is, broken down.

All countries in any part of the world make infrastructure promises they don’t keep, but in Costa Rica it’s the rule, not the exception. A new highway from San José to the Pacific coast was discussed for more than two decades before it was begun. Finally, before it was begun, it was drawn on some maps. It must exist by now, mapmakers must have thought, and so they began including it.

As A.M. Costa Rica has reported, the country’s “deplorable road and bridge conditions have created a recipe for disaster. Roads in Costa Rica are much the same as they were decades ago. However, during that time, the population has doubled and so has the number of cars on the roadways. The problem, of course, is that the country is broke.”

I was interested to hear others’ perspectives on the question: Why not Costa Rica?… so we put it out to members of our Overseas Living Unlimited circle in their virtual Clubhouse.

Here are a couple of their comments…

“I lived in Costa Rica for four months in Nuevo Arenal from the end of 2012 to early 2013. I was working in real estate at the time. I was bored as there was not much to do. The beaches are lively, but the dry season makes that area brown and dusty. I would go back on vacation but not to live.”

“Currently in Costa Rica as I type. Purpose of this trip was evaluating retirement options. Two huge positives are super-friendly people and great food. However, Costa Rica will not make the cut for retirement. As stated by others here, prices are higher than anticipated, and most beaches are not good for swimming. Almost all real estate is now North American pricing.”

Independent Living Communities: Retire In Style Or Earn A Profit

The Best Places To Visit In Portugal

Seventy-something Deryl Fisher moved to Panama and then the Dominican Republic for several years. Deryl spent several years in the DR driving a “pirate taxi.” He’s now learned some Spanish to a good level, though he continues to work on it, and has begun to work as a freelance writer in recent years, telling others all about his wide-ranging expat experiences.

The Best Places To Visit In Portugal