Moving To Playa Del Carmen As A Young Family

by Live And Invest Overseas
in Lifestyle, Mexico
0

We became obsessed with HGTV’s House Hunters International, and the seed was planted. Week after week, my husband and I sat and watched, riveted, as couples and families just like us left behind their jobs, friends, and relatives to pursue their dream lives in heavenly tropical destinations.

It wasn’t long before we began to toy with the idea of our very own adventure… to go somewhere with warm sunshine and palm-lined beaches.

For four months we went back and forth, in our “sane moments” chalking up the moving-overseas idea to lapses in judgment—surely it was crazy talk. But a persistent whisper filled our daydreams with thoughts of sand between our toes and an endless summer climate…

In May 2010 we could no longer ignore the calling; we made the decision.

We were moving to the tropics.

We listed our home, and in just two days we had signed a one-year rental agreement with a delightful family of four. A week later my husband and I flew down to Cancún, Mexico, where we would open a new branch of our import business.

Over the first few days in Mexico we looked at several appealing properties—some right on the beach—but, we never got a feeling of community, which was important to us. On the final day of our trip we rented a car and ended up in Playa del Carmen, just 45 minutes south of the Cancún International Airport. We contacted a local real estate agent who led us to Playacar, a residential community on the south end of the city.

Driving down the cobblestoned road—alongside residents in their golf carts—we noticed schools, restaurants, and plenty of fantastic homes with for sale or rent signs.

This seemed more our speed.

Within hours we had signed a rental contract on a home that came with a modest pool and was surrounded by lush jungle and vibrant bougainvillea trees. Still in shock from the surreal experience of our dreams finally coming to fruition, we celebrated with drinks and lunch, enjoying the picturesque blue-green seascape that unfolded in front of us… the view of our new life.

Once we had both made the firm commitment to move, all the details began to fall into place. We sold most of our belongings and headed to Playa with nine suitcases and a golf bag. In the friendly community where we settled, the residents were estimated to be two-thirds expat and one-third Mexican.

We registered our three children (ages six, four, and three at the time) in a wonderful school. They managed to make the transition smoothly enough, although not one of them spoke a word of Spanish.

We found it easy to meet people. Couples and families we encountered shared stories similar to ours, revolving around travel and a search for tropical bliss.

I’d be lying, though, if I didn’t admit that, during those first weeks, panic didn’t occasionally set in. “What were we thinking?” crossed my mind more than once…

Instead of harmless house spiders, we would learn to coexist with the odd scorpion or cockroach. Waiting for scheduled appointments with the phone and cable technicians or a handyman became something of a full-time occupation.

We came to understand quickly why the Mexican culture seems to have the patience of Mother Teresa (except for the taxi drivers…. but that’s typical wherever you live!).

People speak nostalgically of the Playa del Carmen, of the good ol’ days… 30-or-so years ago when it was just a small village with wild boars running through a handful of dirt roads.

It’s true. Playa has grown significantly over the last couple of decades. But it manages to retain its rustic charm. 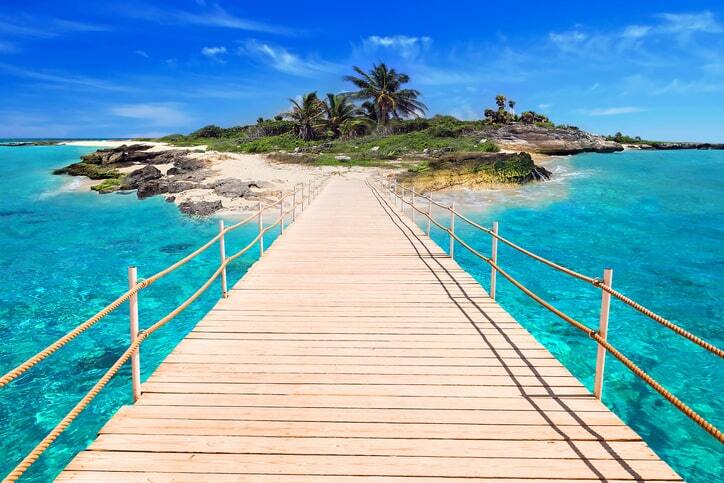 The Upsides Of Playa’s Development?

Residents no longer have to drive an hour for a grocery run, and you can find just about any item needed to stock the pantry (although imported items can sometimes be triple the price they are back in Canada or the United States).

Generally, the cost of groceries is at least 50% less than in Canada, where we moved from. I can get an entire week’s worth of groceries for about 80 Canadian dollars—and that includes a bottle of wine!

Since Playa del Carmen has become a major tourist destination, prices for a nice meal with a couple of Caribbean cocktails on 5th Avenue (the city’s main dining, shopping, and entertainment district) can be considerably higher than a typical meal elsewhere in Mexico.

That said, there are plenty of restaurants just off La Quinta (as this famous strip is called locally) where you can get a delicious lunch or dinner for less than US$10. Just ask the locals—they’re always happy to recommend hidden gems throughout their city.

Taxes, insurance, automotive repair, medical and dental care are all considerably lower cost here than back in Canada. “Staycations” are popular with our family, as most of the all-inclusive resorts in the area slash their prices and offer kids-stay-free deals in the off season (from June through the end of October). And many local businesses—restaurants, spas, and tour companies, for example—offer discounts for locals.

Taking all of these advantages into consideration, the cost of living the beach life in Playa is more than reasonable and one of the many attractions for the large expat population here.

The city is passionate about its art scene and is a hub for artists of all kinds… from talented musicians, dancers, and actors to gifted painters and writers. New museums and theaters continue to pop up every few months with fanfare.

Some of the downsides worth mentioning include the parking—or lack of it. There are a few lots downtown, but as the city becomes more developed and populated, the number of parking spaces seems to diminish as more curbs are painted yellow (meaning no parking) every day.

On the other hand, the downtown core of the city is small enough to be navigated on foot, and the whole of Playa del Carmen is easily traversed on a bike.

Coming from Canada, I sometimes miss the green spaces and playground areas for kids, the pumpkin patches, and the Christmas tree farms where you can select your own pine from the field while enjoying a cup of hot chocolate. Unfortunately, these types of festive activities to mark the changes in the seasons don’t exist here.

Neither, though, does the commercialism often associated with these times of year, and we find that a plus.

We don’t have anything like Sea World or Disneyland—yet. But we feel pretty fortunate that Mother Nature gave with both hands in this region. We enjoy swimming in the Yucatán’s thousands of natural pools, known as cenotes, carved out of the limestone bed of the peninsula.

Many memorable hours are spent on the water, diving and snorkeling near the world’s second-largest barrier reef. Spotted whale sharks, sea turtles, and rays sometimes accompany us on our underwater adventures… or, rather, we are privileged guests graciously welcomed into their underwater home.

It is a simple life, one in which connections with family, nature, and friendships are nurtured in a way that I have not experienced before.

I have yet to tire of Sunday picnics on the beach, spectacular sunrises that bring me to tears, and sweeping turquoise views that never fail to leave me spellbound.

And I doubt I ever will.

The Truth About The Health Care In Mexico For Expats