English-Speaking Islands That Are Perfect For Travel, Life, Or Retirement...

On English-speaking islands you can enjoy island life with some of the familiarity of home. Visit or relocate to any of these islands and you can relax, knowing you will be able to talk with the local people. Integrating into the community and making friends circles is important to anyone overseas. The ability to converse in your mother tongue with the locals is a big benefit. For those who are keen to learn, many of these islands speak more than one language. You can learn a new language with the safety net of being able to revert back to English if you get stuck!

[Read: The Best Ways To Learn A Foreign Language Today]

Here at Live and Invest Overseas, we like to think of ourselves as impartial. It would be remiss not to mention some of the downsides to living on an island in the sun. The salt in the air means things will rust more quickly. Not only cars and BBQs but also computers and frying pans. Your favorite U.S. products need importing and will cost far more than you would expect to pay at home.
If you are adaptable this can be beneficial though. Local seasonal produce is generally inexpensive and also delicious. Tasting fresh food which is perfectly ripe and picked that morning can be a revelation.
The list of English-speaking islands has something for everyone. Moving to a country where you speak the language can make things that little bit less daunting.

1. Islands Of Belize – Tiny Islands Where You Can Speak English

Belize is the only English-speaking nation in Central America. The islands in Belize known as Cayes, total more than 450. These tiny English-speaking islands are a great place to fish and enjoy the warm ocean. Ambergris Caye is the largest and most developed of these islands.
English is the official language and widely spoken here. The native language is Kriol and the locals will appreciate any attempts to learn. The currency is the Belize dollar which is conveniently locked at $2 Belize to US$1. Most places list prices in U.S. and Belize dollars which is convenient. You can generally spend both currencies here. Spending large notes can sometimes be tricky. There is often a minimum spend enforced if you wish to use a note above the value of $20.
The average temperature in Belize is 29 degrees Celsius and the weather is hot year-round. Mainland Belize is one of the least densely populated places on earth. The islands are more populous but still uncrowded compared with other Caribbean islands.
Belize is a great location for diving and sports fishing. The coral reef in Belize is the second biggest in the world and home to more than 400 species of fish.

The Belizeans are generally welcoming and expats say they feel welcome. There are no restrictions on foreigners owning property here. There is also a refreshing lack of ‘red tape’ in Belize. If you are someone who likes to do your own home improvements you can make excellent progress. Builders move at a slower pace than in the U.S. though. Many of the ex-pats who move here are looking for an ‘off the grid’ lifestyle. Luxury units and the beachfront property is also available at competitive prices.

Malta sits in the central Mediterranean, south of Italy. It is an English-speaking island with a rich history. It is a favorite with holidaymakers in Europe.
Malta has two official languages which are English and Maltese. All the locals speak Maltese and nearly 90% of the population speak English. Business transactions and official documents use English. Due to Malta’s proximity to Italy, the language here has an Italian accent. Indeed many people here speak Italian as well as English and Maltese. The currency of Malta is the Euro.
Plenty of accommodation is available, both rental and purchase. Expat areas can be very expensive so look around for the best value. As Malta speaks English meeting new people will not be a problem.

For employment opportunities, there are lots of international companies. They are keen on multilingual people. The more languages you speak the better your chances of getting a top job here.
Malta is a safe place to live with great healthcare. Private healthcare is particularly cheap. You will also enjoy low monthly bills. The climate is mild and warm year-round. On average Malta receives around 3000 hours of sunshine per year. The Mediterranean is beautifully clear here. The shipwrecks that have accumulated over the years make Malta a haven for divers. Malta also has lots of great walking routes.

3. Islands of Malaysia – No Need To Learn A New Language

Although Malaysia is not officially an English-speaking island, it is widely spoken. Many people here speak ‘Manglish’ which blends vocabulary from different languages. For example, ‘Wei macha, you want makan here or tapau?” (Do you want to eat here or take out?) contains Tamil, English, Malay, and Chinese.

The Malaysian currency is the ringgit but everyone refers to it as dollar. In major shopping centers, you can buy your goods with the U.S. dollar. Everywhere else you will need to use the ringgit.

Malaysia has a tropical climate. This means hot and humid year-round with an average temperature of 27 degrees Celsius. Nearly 100 inches of rainfall every year. As the days are so hot, the people like to take advantage of the cooler temperatures in the evening. Late suppers are the standard here. Around 11pm the outdoor cafes will be busy with people eating and socializing. This late supper is a tradition in Malaysia and forms an important part of the culture. For an expat moving here, this is something you should go if you want to become part of the local community.

Malaysia has the tallest towers in the world, The Petronas Towers. These iconic buildings dominate the Kuala Lumpur skyline. It has amazing street food which incorporates the many styles of food. You can eat cheaply and well at these stalls and sample a range of unfamiliar foods at the same time.

We recommend checking out the islands of Pulau Pangkor, Penang (George Town, in particular), or Langkawi.

The island of Barbados has long been popular with tourists. It’s one of the quintessential blue seas, white sands location. Originally a British Colony, Barbados gained independence in 1966 but retains Commonwealth status. Barbados has been an English-speaking island for centuries. Barbados has had uninterrupted parliamentary governance dating back to 1639. This makes it one of the oldest parliaments in the world. The currency is the Barbadian Dollar or Bajan Dollar. It’s fixed at $2 Barbadian to US$1. Most places will accept U.S. dollars but you will get more for your money using the local currency.

Barbados Is A Luxury Island

Barbados is warm and sunny year-round and has an average daily high of 30 degrees Celsius. A sea breeze makes the temperature and humidity bearable. The breeze also makes for excellent sailing and windsurfing. Barbados is the most developed nation in the Caribbean and has pure drinking water. The flip side to this is that it is the most expensive Caribbean destination. It is also the most densely populated.
[Lower-Cost Alternative: Try the Dominican Republic]
Barbados is especially popular as a holiday destination with the rich and famous. The island also boasts a huge population of Mongoose. They arrived to control the rat populations. These were destroying the farmer’s sugarcane. The snakes on the island were not able to eat the rats quickly enough so they introduced Mongoose to help. The Mongoose hunt during the day whereas the rats come out at night. This makes it debatable how much help the Mongoose have provided.

5. Islands of Fiji – Pacific Island Lifestyle That Speaks Your Langauge

Formed by volcanic activity in the South Pacific, Fiji became a British colony in 1874. Fiji gained independence in 1970 and became part of the Commonwealth. In 1987 she became a republic after a military coup and in 2014 Fiji gained a democratic government. The currency is the Fiji dollar although U.S. dollars are generally accepted. Fiji is an English-speaking island but the native language, Fijian is also spoken.
Fiji consists of 333 islands. These contain jungle, mountains, beaches, and grassland for rugby pitches. Fiji is one of the most rugby-mad nations in the world. The percentage of people who play professional rugby is higher than anywhere else. If Fiji is playing a 7s or International game then the country will come to a standstill. Fiji has a warm if rainy climate and is a premier destination for surfing, kitesurfing, and diving.

A Country With An Interesting History

Fiji was formerly a cannibal island and the people ate a missionary named Rev. Thomas Baker during a visit. His crime was the insulting behavior of touching someone on the head. Touching someone on the head in Fiji is a serious faux pas. While not as serious as it once was, it’s mistake still best avoided. It is possible to buy souvenirs such as brain pickers and cannibal forks!
The people in Fiji are friendly and you will always find a big smile wherever you go.

The island has white sand beaches, and mountain slopes covered in forest. with streams running down them. You will find both white beaches and black volcanic beaches. St Kitts and Nevis is an attractive destination for tax purposes. If you have money to store offshore then it is definitely a location to consider. The cost of living is similar to the U.S. but jobs are not easy to find. St Kitts is a better destination for retirement or for those with savings. A seaport is being developed in Nevis which will bring extra money into the economy.
St Kitts was originally a tobacco plantation. It later switched to sugar cane, tobacco still grows wild in some areas.
7. Ireland – Speak English In The Auld Country
Ireland is two countries, Northern and Southern Ireland. Located West of Great Britain it is known as the ‘Emerald Isle’ due to the lush green grass which abounds. Ireland has had a human presence since 10,500 BC. The Gaelic culture evolved during the first century AD. Most of the big towns such as Dublin, Cork, and Waterford date back to Vikings raiders during the 9th century.

Do You Qualify For An EU Passport?

Over 40 million people of Irish descent are in the States. If you have just one Irish grandparent you are eligible for citizenship. This means you can qualify for an E.U. passport. This allows you to work or live anywhere in the E.U..

The climate in Ireland is generally mild with a lot of rain. It is the rain which keeps the grass green here and in 2007 Ireland had 40 consecutive rainy days. Property prices took a hit after the 2008 economic crash. There are signs of recovery recently. The economy is modern and reliant on international trade. There are job opportunities available to those with the right qualifications. 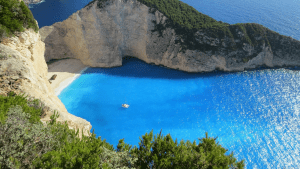 Article Name
English-Speaking Islands Where You Can Live Or Retire
Description
A list of islands you can move to where you don't need to worry about learning another language. Go somewhere the people speak English.
Author
Oliver Lovett
Publisher Name
Live and Invest Overseas
Publisher Logo

7 Of The Best Beach Towns In Mexico

Ask Yourself These Questions Before You Move To Belize

Schools In Belize: What Every Expat With Children Needs To Know

Buying Real Estate In Belize: What You Need To Know

7 Of The Best Beach Towns In Mexico