The 10 Best Panamanian Dishes You Must Try Today

Food In Panama Is More Than Cuisine, It's Culture

When people talk about Panama, the first things you probably hear about are favorable taxes, shopping opportunities, the Canal, amazing beaches and wildlife, the inexpensive cost of living, the hot and humid climate, and even how much it rains.

But what people sometimes miss is that Panama is a treat for the food enthusiast.

You can find nearly every type of cuisine here. There are Brazilian, Argentinian, Japanese, Mexican, Venezuelan, Colombian, Peruvian, and Indian venues, and even your classic U.S. diners.

But today, we want to focus on the domestic options. Panama has a world of different (and affordable) dishes, drinks, and sweets. There are so many that it is nearly impossible to narrow them down.

Here’s our take on the must-trys if you happen to find yourself on the Isthmus. (In no particular order; rating them would prove even harder.)

A local favorite. It’s a kind of thick rice soup with yams, yucca, mixed vegetables, and mixed seafood. It can also be served with beef instead of seafood, but the first choice is the most popular.

Guacho is sometimes served in a totuma, a deep bowl made from the carcass of a calabash, which grows locally.

You can find this dish in almost any Panamanian restaurant in town. We recommend checking out venues along Vía Argentina in El Cangrejo or in Maito, a restaurant featuring renowned national chef Mario Castrellón.

If you come to Panama, a visit to Mercado de Mariscos, or the seafood market, is a must. You can find ceviche cocktails in most stalls for about US$3. A steal for first-class ceviche.

Fishermen deliver their catch to the restaurants nearby, meaning it’s as fresh as possible. The local favorite is ceviche de corvina, or seabass ceviche, sometimes served on top of crackers or fried plantains.

Take a walk along the Cinta Costera all the way to the market where you’ll enjoy the sights and sounds of the marinas, docks, and nearby parks. The Cinta Costera is a massive, world-class pedestrian beltway that begins outside Casco Viejo, passes by the market, and ends in Punta Pacífica (one of Panama’s most luxurious neighborhoods).

Many food stall owners speak English, meaning you won’t have to worry about the language barrier if your Spanish is a bit rusty. 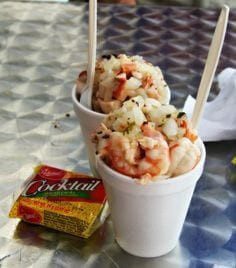 Ceviche is a perfect dish for an afternoon at Mercado de Mariscos, along Panama’s Cinta Costera

The contrast of flavors is simply amazing. It’s spiced, shredded beef on top of rice.

The rice is cooked in coconut milk, giving it a thicker and sweeter finish. A side of patacones (deep-fried green plantains) makes this dish even more delicious.

Patacones are the default side dish to almost any Panamanian main course.

Also known as sancocho de patio (yard stew), this is one of the most traditional meals is Panama. It’s a chicken broth mixed with yams, cilantro, vegetables, and a variety of spices.

Sancocho is served with a mound of white rice, which is commonly mixed in with the stew. It’s closely related to guacho, except for one small detail. Sancocho isn’t cooked with the rice; rather, it’s spooned in afterward.

Panamanians swear by the healing powers of sancocho, which is said to cure even the most terrible of hangovers. You’ll find everyone eating it, from the working class to the elite. Where there is a kitchen, there is sure to be a pot of sancocho on simmer.

Not a dish per se, but a mouthwatering dessert instead. Bienmesabe roughly translates to “tastes good to me.”

The dessert is of Spanish-Romani origin but has become a big hit in the Hub of the Americas. The main ingredients are ground almonds, egg yolks, honey, milk, and rice.

A trip to Panama wouldn’t be complete without a taste of the country’s most popular meal. Though rice and beans with chicken may sound simple, when done right it makes for a flavorful meal.

Arroz con guandú y pollo guisado is a staple here. It’s served in the humblest to the wealthiest households.

Tip: Many people serve their meal with small, fried yellow plantains, which add a little sweetness.

Pargo frito is the perfect meal to pair with your ceviche, especially when enjoyed along the Cinta Costera. If you’re more of a beach person, you’re in even better luck, as this meal can be found in almost any beach restaurant.

The dish features a whole, deep-fried red snapper, served as fresh as possible.

The meal usually comes with patacones or papas fritas (french fries) and a selection of sauces. Many restaurants also include lemon slices and tomatoes to offer a bit of citrus flavor.

If you’re a bit squeamish when it comes to seafood, especially when fried whole, this might take some getting used to, but believe us, once you have a taste you’ll be sold.

The carimañola has won the hearts of nationals and foreigners alike.

It’s a deep-fried (yes, deep-fried food is as Panamanian as the Canal) yucca pastry with a ground meat filling. It’s small—no more than one inch—and it’s basically impossible to eat only one.

Panamanians tend to eat carimañolas for breakfast or as an appetizer. They’re sold in restaurants for about US$2 per plate.

The recipe for tamal de olla varies from country to country in Latin America.

Panama’s rectangular tamal uses a mix of sweet and salty notes to create its unique taste… beef, chicken, or pork, peppers, capers, and olives. It’s cooked wrapped in a bijao, banana, or plantain leaf, boiled in a water-filled pan, and devoured in a fraction of the time it takes to prepare.

This is La Inmaculada restaurant’s best-kept secret. The 50s-style Panamanian chain diner sells it at about US$6, but it’s probably worth double that.

It’s a perfect way to top off any meal.

And a perfect way to top off this list!

Why The Ecuador Residency Requirements Are The Easiest In The World