This Old Hippie From California Has Found His Perfect Fit Overseas

by Sophia Titley
in Belize, In Focus: Belize
0 0
0

I recently sat down with Donald Houser, a resident of Carmelita Gardens in Cayo, Belize, for the latest Overseas Living Unlimited Webinar.

Here’s a snapshot of our conversation…

Sophia: Can you tell us a little bit about yourself?

I thought I’d end up in Mexico. It was always right in my backyard in California, so I spent a lot of time there. But, to be honest, my Spanish is terrible… like, not even tourist-level. And I’m someone who loves to talk!

I realized that if I couldn’t find someplace where I could converse, I was going to feel sad and alone.

I’d been going to Cancún for about 12 years. I kept going further and further south looking at land and opportunities and ideas… Eventually I ran into Belize.

I came down and did all the touristy stuff: golf carting on Ambergris Caye, enjoying the tourist vibe in San Pedro… I went to Caye Caulker, walked around barefoot, and said, “Yeah, this is my speed.”

I’m an old hippie. It was perfect for me…

I decided to join a Carmelita Gardens Discovery Tour while in Belize. They picked me up at the airport and showed me around…

I was here for three days, and by the end, I knew which lot I was going to buy. That’s how I got to Carmelita Gardens.

Sophia: What exactly is Carmelita Gardens for those who might not know?

Donald: Carmelita is a master-planned community in the Cayo District.

The idea was to build a Midwestern-style neighborhood, so it has a town square, there’s a church drawn into the plans, we’re talking about a gazebo where we can have a bandstand… Just a nice mom-and-pop-style community.

Carmelita Gardens’ founder, Phil Hahn, got the idea from his dad and grandpa’s stories… They’d talk about their childhoods and how wonderful it was, even during the Great Depression when there were soup lines and all sorts of horrible things…

People looked out for each other despite the hardship. So-and-so gave piano lessons… they’d trade their skills for eggs… this other person was the baker who you could exchange goods with… They made it work.

Phil thought, “We can replicate what they had down here in Belize,” hoping that people like me would find it.

Right now, the community is made up of adults of various ages, but there are some kids nowadays, too. Younger families started moving in recently…

We’ve got 25 or 26 homes built and people living in them or renting them out. We’ve got another 20-odd in the pipeline that are already being designed, so we’re going to double in size in less than a year. 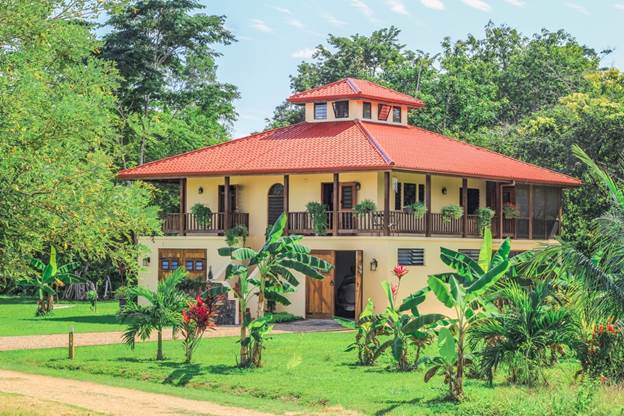 Sophia: Yes, I’ve heard Carmelita is the busiest it’s ever been in terms of sales. Why do you think that is?

Donald: Not to put a negative spin on it, but I think it’s because of all the challenges throughout the world…

The pandemic, masks and no masks, vaccines and no vaccines, anti-vaxxers and vaxxaholics, and everyone in between. There’s enough fear throughout the world that we’re looking for alternatives.

People often say that they’re looking forward to having things back to normal after the pandemic is over… Well, it’s not going to be that way anymore! And knowing that, I wanted to create a new normal, and I wanted to do it here.

And so far, my biggest worries have been what I’m going to have for dinner tonight or deciding which book to download to my Kindle, because I’m doing so much reading lately. It’s been really tough on me!

Sophia: What does a typical day look like in Carmelita?

Donald: Well, yesterday we did a river float. Six of us went out on the innertubes and spent about an hour floating and teasing each other about potential crocodile sightings. (There weren’t any.)

A lot of people have cars, and we help each other out. We’re all on an app, and if someone’s feeling kind of neighborly, they’ll post, “Hey I’m going to Spanish Lookout or San Ignacio. Does anyone need to go shopping?”

You can catch a ride on any given day and get whatever you need. Usually you stop for lunch, too.

My days look like this: I get up, and all of a sudden, it’s nighttime. I don’t know how it happens… I ride my bike almost on a daily basis. Some days I’ll spend a couple hours talking with my neighbors…

It’s what we all wanted to be able to do, but we all had to go to work every day. I don’t know about you, but I’d work five days a week and then spend my two days off getting ready to go back to work for another five days.

Between laundry and shopping and everything else, there was no time. Then I’d work 50 weeks a year to enjoy a 2-week vacation. I’m not on vacation every day here, but that’s how simple my life is now.

I found out that when it gets dark down here, people just go to bed… even at 8:15 at night! Wow, that’s new. It’s just idyllic.

Sophia: What types of people move down here?

That’s probably the strongest motivator right now that sells lots for future homebuyers… people who’ve just had enough of wherever they live, who want to change it up. They’re willing to face that fear…

We’re human beings; we hate to change. Most human beings wait until it hurts too much to stay the same. We have to be in pain before we change, whether it’s “I’m too big,” or “I should quit smoking”…

I sit on my front porch and watch fireflies at night… It’s like a free light show in the field in front of my house. I never would’ve done that back in California…

I am definitely still in the honeymoon phase of living here, but I expect to be in that phase for a long time. All of the things I used to complain about I don’t have to do here. And if I do them, it’s by choice.

Belize is many things... many of them diminutive. It's a tiny country with a small population. Density is low... and...