And 2 million of them—nearly 20%—live in Mexico.

But what will really blow your mind is just how easy it can be to move here.
I should know…

In fact, I could have qualified without having a pension or proving income…
Mexico is one of the only countries in the world where you can qualify for residency by showing only a bank balance or IRA.

That was it… my international relocation. As you might know, relocating overseas is usually not this simple.

Believe me, I’ve done it the hard way plenty of times…

So today, I ask myself this: Why go farther?

After nearly 20 years of experience scouting markets and opportunities across the Americas, I chose to buy a home in Mexico… and here are 13 compelling reasons why…

But what’s really unusual is that you can qualify for residency with savings, such as a 401k or IRA balance.

#4 The dollar is strong compared to the Mexican peso:

The United States dollar is high against the Mexican peso, resulting in some terrific bargains. The cost of living is unbelievably low (even in formerly-expensive areas), and the cost of real estate priced in pesos is at bargain levels… at least for now.

Have a look at this chart… 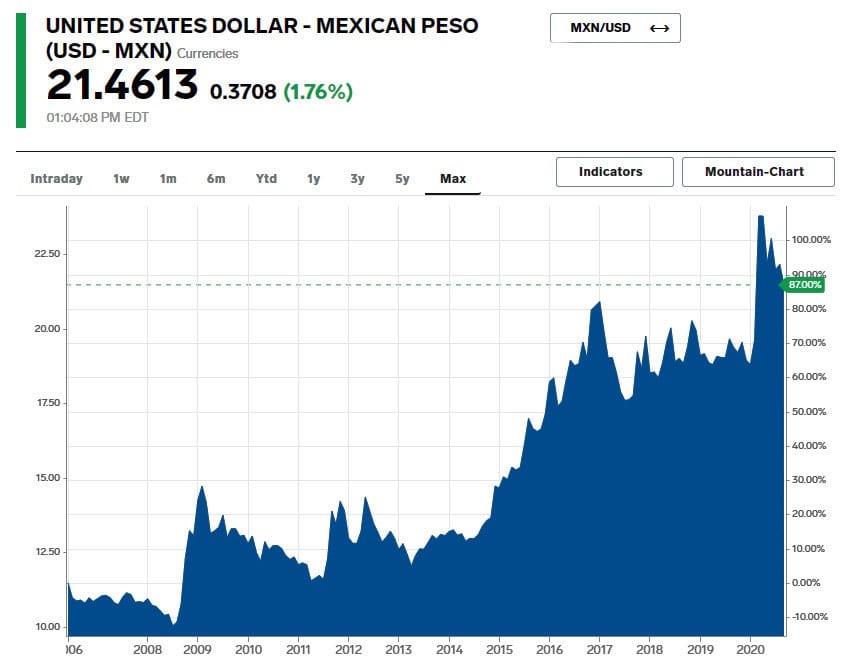 Credit: https://markets.businessinsider.com/currencies/usd-mxn
The Canadian dollar also has a lot of power these days in Mexico, when compared to historic norms.

#5 Mexico has the best food in Latin America:

Forget those beans-and-rice countries, eating guinea pigs, or the bland-and-boring food that you’ll find in much of Central and South America.

Mexican food is rich and savory, with loads of exciting options. From its new, upscale Mexican gourmet dining to its mouthwatering seafood, from spicy salsas to tamales, tacos, and enchiladas… Mexico can’t be beat.

(What about Brazil, you say? I lived in Brazil, and the food is great… but Mexico’s is better.)

In some parts of Mexico, you don’t even need a vehicle permit to bring your car or truck. Where you do need one, you can get the permit and the insurance online before you leave and just drive right through.

Of course, if you’d rather fly, Mexico is our closest neighbor… with good flight service to the States, and lots of nonstops to Canada with no United States layover.

#9 The real estate markets of Mexico are a bargain:

Now today, the coronavirus will certainly depress property prices. This is unfortunate for Mexico’s tourism industry, but has created plenty of real estate bargains for expats.

#10 You can relocate to Mexico cheaply and easily from the United States:

#11 Mexico is no backwater:

#12 You can return easily to use Medicare:

#13 It has many of the conveniences of home:

After all, Canada has Home Depot, Walmart, and Wendy’s, too, and it’s still the “real Canada”…

Landscapes Of Italy And France