Living Or Retiring In Latin America

Contrary to Europe, Africa, Australia, and Asia, Latin America is not a continent per se, it’s the region of the Americas where Romance languages are primarily spoken, predominantly Spanish and Portuguese, as well as French.

The countries and dependent territories that make up Latin America are:

Living in Latin America has its advantages.

We give a lot of virtual press to Latin America because this part of the world is sunny, accessible (from North America and, depending on the destination, from Europe, too), welcoming, interesting, diverse, friendly, home to established and expanding communities of expatriates, bursting with business and investment opportunity, and, in some spots, sublimely affordable.

If this is the region that has your attention, be you a would-be retiree, entrepreneur, investor, or adventurer, where, exactly, should you focus your interest? It depends, of course, on your agenda.

Latin America not only offers white-sand beaches and low cost of living… Living here, you can even enjoy an Old World Continental lifestyle. Some cities in South America offer a fair imitation—Buenos Aires, Argentina, for example, and Medellín, Colombia, to name two. Both are cities of open-air cafés, classic-style museums and theaters, art galleries and antique shops.

And both, you’ll note, are in South America, not Central America. The differences between these two regions, even between Panama and Colombia, next-door neighbors, can be striking. We’re speaking generally and could name exceptions to every point, but, again, generally speaking, South America offers what we’d call more polished options, a good place to look if what you want is culture on the cheap.

Central America, by contrast, is, everywhere, rough around the edges. These are small, developing countries with non-existent budgets for things like art museums. Making for a way of life that is, for some, charming. Romantics (like us) in Central America focus on the potential for what could be rather than the reality of what sometimes is.

On the other hand, this sun-blessed region can be but a quick plane hop away and a user-friendly place to establish foreign residency…

Pluses and minuses… give and take.

Over the past four decades, Americans have voted Mexico the world’s #1 place to live or retire in the way that really counts—by packing up and moving there. This country is home to more American expats and retirees than any other.

Mexico offers some of the best coastal lifestyle and retirement options in the Americas, including our #1 choice for an affordable life of luxury on the Pacific. 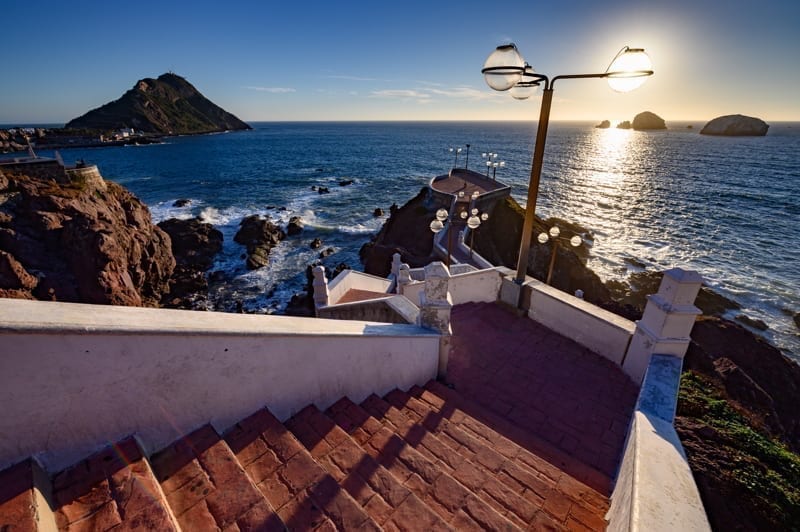 Mazatlán, on Mexico’s Pacific coast, is one of the few places in the world where you can walk for miles on an uncrowded beach within the city limits. This is a real city with beautiful beaches and a walkable colonial center that’s both a popular expat choice and an authentic Mexican resort town.

Located about midway along Mexico’s Pacific coast, Mazatlán has been out of favor for decades but is making a comeback. December through June, the weather is ideal, making Mazatlán a top choice for snowbirds.

Ecuador is home to great weather and jaw-dropping low prices. This country offers a perennial spring-like climate in the mountains (meaning no heating or air conditioning is required), an easy path to a retirement visa, and several well-established expat communities. Plus, local handicrafts make for great import-export business opportunities for those looking to start a business overseas.

Ecuador is not known for its beaches, and its coast remains relatively undeveloped. Current talk of a new beach road, though, is bringing investor attention to one particular stretch of coast, giving our editors reason to return Ecuador to our active radar screen.

In Ecuador, we believe Cuenca to be the best place for an expat to retire. It’s not the cheapest, but we think it’s the most affordable place in the Americas to enjoy a city lifestyle. 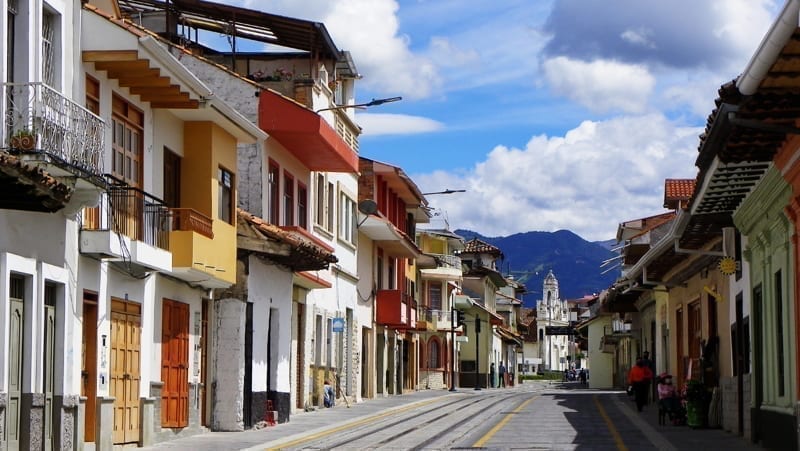 Cuenca, Ecuador, is the most affordable place you’d want to retire in Latin America. Other places may be a bit cheaper, including some places elsewhere in Ecuador, but you’d be removed from the conveniences of a city, you wouldn’t have access to certain services, amenities, and conveniences that make life comfortable, and your standard of living might be reduced.

Cuenca is this region’s best quality-of-life buy for the money. This is an historic city that’s also a healthy place to live—with fresh air and abundant sunshine—and one of the most authentic Spanish-colonial settings in the region.

Despite its big and growing expat community, this is still a “go local” choice. Ecuador uses the U.S. dollar so retirees in this country have no currency exchange concerns. 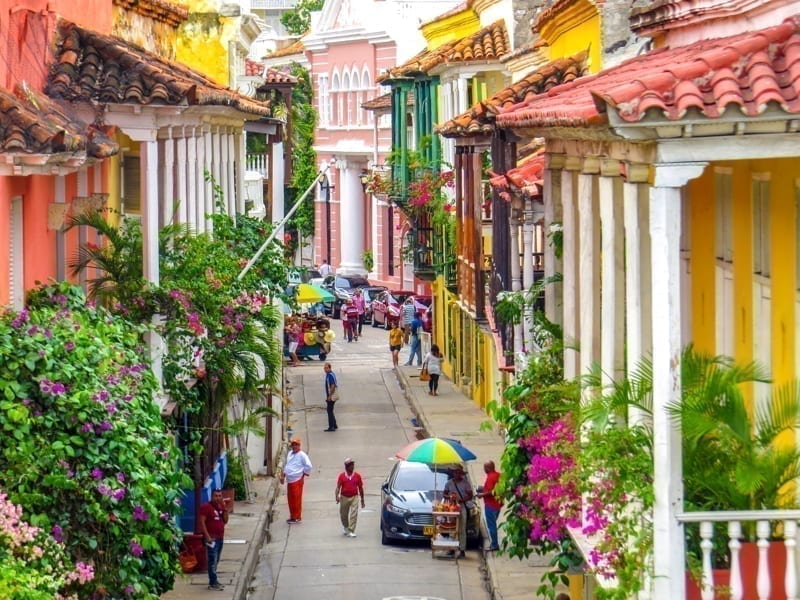 Colombia is quietly becoming one of the world’s top overseas havens. It’s a solid stable democracy on the move. The country is on strong economic footing, showing impressive growth, boasting a powerful industrial base, and enjoying an energy surplus, thanks to its abundant natural resources.

Importantly for retirees and expats, Colombia is home to the best health care in Latin America, with well-equipped hospitals and excellent service available at very affordable prices.

Here you can have a premium lifestyle at a low cost. Monthly expenses might reach between 50% to 60% less than back in the United States.

Pretty, tidy, pleasant Medellín is a city of parks and flowers. It is also one of the world’s most progressive and innovative cities, with state-of-the-art infrastructure and environmentally conscious developers and planners. Most every building is constructed of red brick and topped with red clay roof tiles. The overall effect is delightful.

Thanks to its mountain setting, Medellín is one of a handful of cities around the world that qualifies as a land of eternal springtime, meaning no heating or air conditioning is required, keeping utility costs low. The European undertones in Medellín are strong, from the way the women dress to the way people greet each other in passing on the street.

Thanks to the current exchange rate between the Colombian peso and the U.S. dollar, all of this is available to the retiree at a dramatically discounted cost.

Belize is a safe, welcoming, unassuming little country where the population values personal privacy, self-determination, and freedom. It was once at the heart of the Maya Empire and has some of the oldest known Maya sites.

Belize was an important trading point for the empire and a major population center. The Mayan Empire eventually fell apart but its legacy remains, strewn into the living rock of their temples.

Later on, Belize became a major pirate base. The pirates used their knowledge of the shallow waters and reefs around Belize to ambush and rob merchant ships. The mouth of the Belize river made the perfect place to hide their ships as they lay in wait.

Today, Belize is famous for its white-sand Caribbean beaches and clear, unpolluted waters. The best weather in Belize is between December and April, making it perfect for snowbirds.

Belize is also known as a friendly and welcoming country. The official language is English, something that makes it easy for expats to thrive. Plus, Belize offers one of the best residency programs you can find. 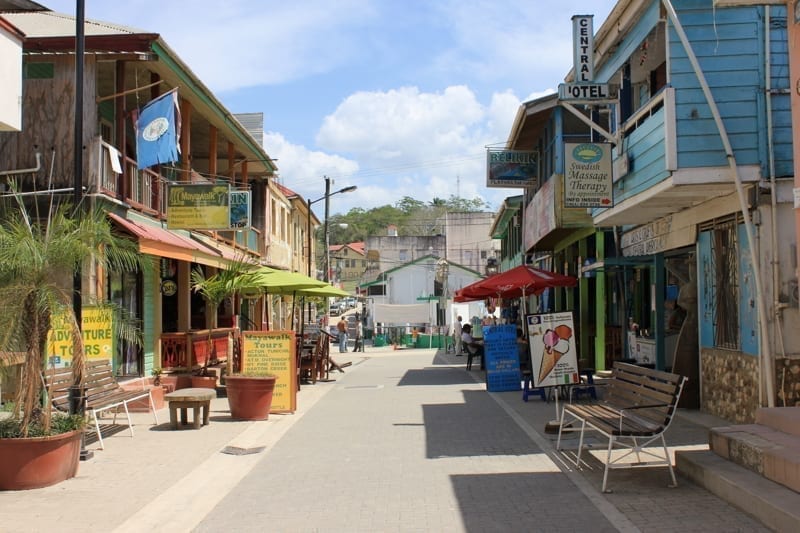 With everything going on in the world these days, Belize’s back-to-basics approach to living can be almost irresistibly alluring. San Ignacio is the heart of this country’s rain forest interior. This is a region of mountains and Maya ruins, rivers and waterfalls, Belize’s frontier, a place to stake a claim and make your own way.

The wide-open spaces around San Ignacio appeal to the adventuresome and the independent. Living here, you’d enjoy elbow room, far-reaching vistas, and a clean slate. You could start over and rebuild your life entirely. You’d have a higher level of support than you might expect thanks to the fast-growing community of expat retirees.

Panama offers a multitude of visa options to suit anyone’s needs (including the Friendly Nations visa) and international-standard health care. Called the “Hub of the Americas,” this country is ideally located for travel to the United States and Canada. The flight from Miami, for example, is direct and takes about two-and-a-half hours. Plus, Panama makes a great base location from which you can easily explore the rest of Latin America and the Caribbean. 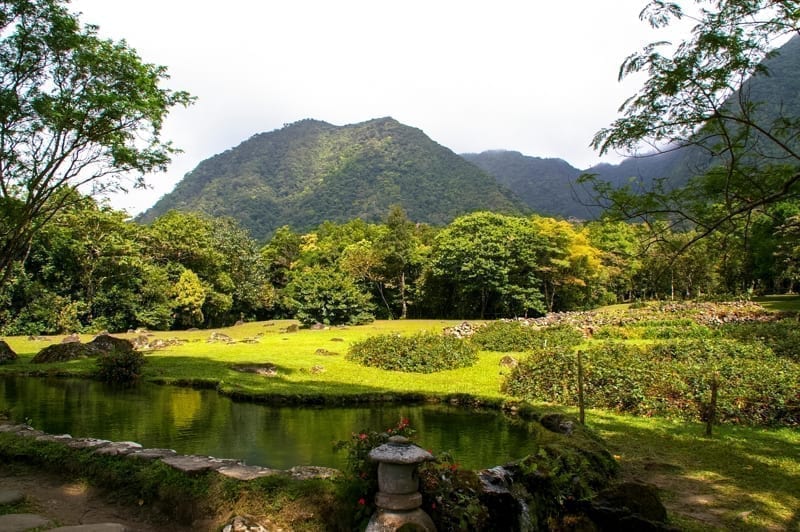 Nestled within the confines of an extinct volcanic crater and overlooked by the Sleeping Indian and other cloud-capped mountains about 75 miles west of Panama City, Panama, lies the sleepy market town of El Valle de Anton.

As you climb the hill from the Pan-American Highway to reach El Valle, as it’s known among the locals, you pass through a series of landscapes, each greener than the one before. The base of the crater is very close to the watershed. You can dig anywhere in the valley and reach water in only a few feet, which accounts for the lushness of the countryside.

El Valle town and environs are home to a community of some 6,000 full-time residents that expands a bit on weekends and holidays. The community has grown over thousands of years from a collection of tiny villages centered around a local market that remains today a center of activity for the region. Many of Panama’s oldest families own second homes in this cool and healthy mountain spot, making the hour-and-a-half trip out from the capital as often as possible.

El Valle continues to expand while sticking to its roots as a rural mountain escape. Services and amenities have expanded and improved in the past few years. Today, the quiet life in El Valle is supported by a mall, a commercial center, and a big U.S.-style grocery store about a half-hour’s drive away.

Carmelita Gardens is an off-grid community in Belize's Cayo District spread out over 98 acres. This quiet, naturally stunning area...

The 9 Places Expats Should Consider When Retiring In Mexico

More than 11.5 million Americans and Canadians live overseas… And 2 million of them—nearly 20%—live in Mexico. Mexico is far...

The first time I saw the Baha'i Temple in Panama City it made an impression... Painted brilliant white and shaped...

Think palm trees swaying in the breeze, crystal clear water, and white-sand beaches. Then add pelicans overhead, starfish within yards of your feet, and maybe even a dolphin or sea turtle to round out the day...These are the San Blas Islands. Located on the Caribbean side of Panama, just east of the Panama Canal, this archipelago of approximately 365 islands and cays offers an opportunity for total relaxation and leaving the hassles, stresses, and worries of everyday life behind completely.A...