by Kat Kalashian
in Lifestyle, Retirement/Living
0

Mexico is still North America… and it can be helpful to remind ourselves of this fact when we think about the big picture of Latin America.

What this means in practice is that this country is as close as you can get to being “overseas” while remaining very near the United States and Canada. You can even drive from California, Arizona, New Mexico, and Texas to several of our favorite spots in Mexico.

This is a big plus for retirees who want to make regular trips back home to see grandkids.

The geographic proximity also means that, culturally speaking, Mexico feels familiar. Roads and highway signage look the same. You’ll recognize the franchise and chain stores, too, from Walmart to The Home Depot, and you’ll find familiar brands on the shelves.

For these reasons and many more like them, Mexico can be a good way to dip your toe into this whole living overseas thing.

Mexico offers lots of options and opportunity for expats. This is a big, extraordinarily diverse country with two long coastlines, mountains, and colonial cities… not to mention Mayan ruins, jungle, rain forest, rivers, and lakes.

It’s estimated that a million Americans and 500,000 Canadians live in Mexico, part- or full-time… and with good reason. The Americanized culture is only one of the attractions.

Plus, Mexico has what qualifies as the world’s easiest residency application process. And, if you prefer to avoid the residency process altogether, you could even live in this country for up to six months of the year without formalizing your status.

And while you should learn some Spanish, especially if you won’t be basing yourself in a big city or major tourist destination, you can get by in English pretty easily here.

Mexico is like a halfway house for expats. It’s an easy way to give it a try and see if living overseas might be for you.

Broadening Horizons To Central America And The Caribbean

Between Mexico and Colombia, the skinny little trail leading south and known as Central America is bordered by the Pacific and the Caribbean.

Our top havens in this part of the world are Belize, Panama, and the Dominican Republic (DR)… and each offers a completely different lifestyle. 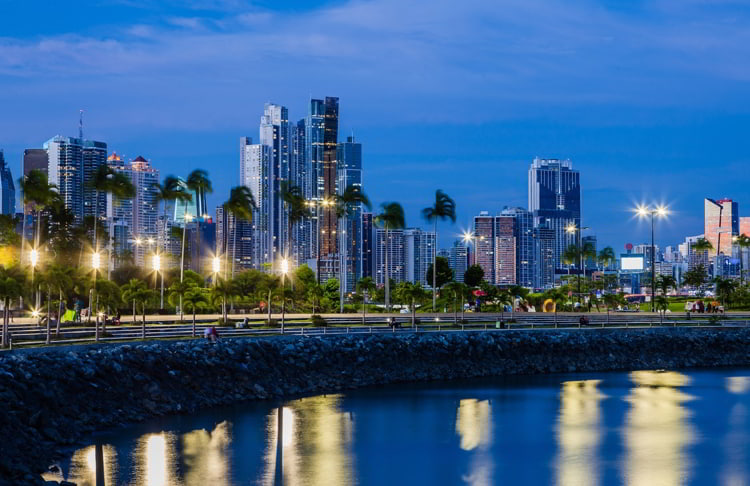 In Panama, Americanized culture is prevalent. Thanks to the big American presence since the Canal was dug in the early 1900s, there is no shortage of Americana. U.S. chains and restaurants are well-established. As in Mexico, you’ll see plenty of familiar brands on the shelves when you go grocery shopping and all the same clothing stores in the malls.

But the similarities in general are fewer in Panama than they are in Mexico, and it’s easy to find more authentically Panamanian parts of the country to settle in. Once you’re outside Panama City, for example, you’ll need to speak Spanish.

On top of its lifestyle benefits, though, Panama also offers a host of what we call “offshore benefits.” In fact, Panama could arguably be called the world’s best offshore haven. It’s a bona fide tax haven, taxing income on a jurisdictional basis, and it uses the U.S. dollar, meaning no currency exchange risk.

Panama’s Specific Countries visa program can lead to a work permit, which is a big plus, and its economy is one of the strongest and fastest growing in the world. That all adds up to Panama being a top choice for entrepreneurs, digital nomads, and the self-employed.

Panama’s is the best infrastructure in Central America, and the country is super accessible, with many direct flights daily to and from North America and Europe. The health care is high quality and affordable.

At the other end of the familiarity spectrum is Belize.

Not a chain store in sight in this country. The language of Belize is English, but the similarities to life back home end there. When you shop, very little will be recognizable to you, from the exotic fruits and meats to the way they sell hardware supplies. Cans of paint, for example, may be sold half or quarter full (the price can be prorated, if you ask).

Infrastructure is not Belize’s strong suit. The country has but three highways… and they’re two-way streets. Secondary roads are as likely to be dirt or gravel as paved, and until 2020 there wasn’t a single stoplight in the entire country. Wi-Fi and cell service can be spotty, depending on where you are.

Legal residency is easy to obtain through the country’s Qualified Retired Persons (QRP) program, and foreign residents pay no tax in Belize on non-Belize income. Thus, if you are British, German, Australian, or Irish, for example, you could become a QRP and reduce your overall tax burden to virtually nothing.

The income needed to live well here is low. Belize can be a great option for someone looking to retire on Social Security income alone. And the country is close enough to the States that you could drive down.

Just offshore in the Caribbean Sea is the DR. This island nation is famous for its picture-perfect beaches and laid-back lifestyle, but what sets this country apart, especially from other Caribbean options, is its more sophisticated lifestyle. The way of life in beach-town Las Terrenas, for example, is more European than Caribbean.

In this “St. Tropez of the Caribbean,” you’ll be welcomed by locals and expats alike, and you’ll enjoy access to a wide range of products from patisserie-baked pain au chocolat to German salami to Swiss cheese thanks to the diverse and multicultural local community.

Santo Domingo, the oldest permanent settlement in the New World, boasts impressive colonial architecture, along with modern shopping options, theaters, museums, and stadiums (béisbol is a national obsession). It’s the best of island living with the opportunity to take in an opera, go to the game, get in a round of golf, or indulge in some retail therapy.

Break Out Of Your Comfort Zone In South America

Once you cross the little bridge of Central America, things can become markedly more unfamiliar.

The way things are done in South America is unique and can take some getting used to, depending, of course, on the country you choose.

Our top picks on this massive continent are Colombia, Ecuador, Argentina, Brazil, Uruguay, and Chile.